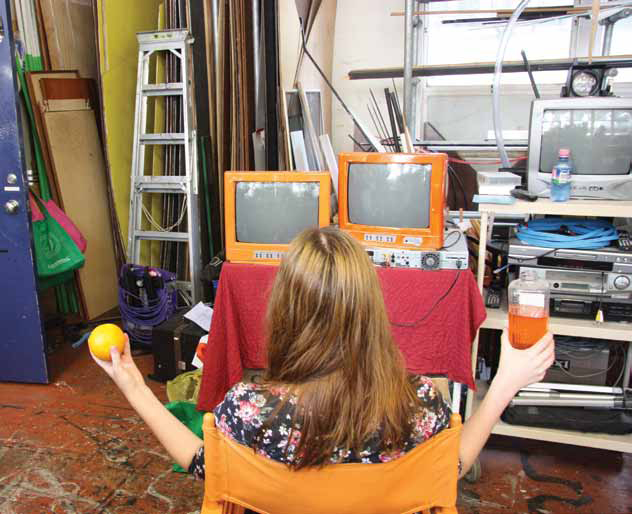 Each week, Wankie heads out to the COFA campus at Paddington to have a chat with one of the cool cats of art school.

This edition’s featured kid is Wallacia Horn-Matton, a third year undergrad in the new discipline of Performative Aesthetics (haven’t heard about this one yet? It’s a new Pop-up Stream that will mainly take place among the unfinished building detritus around COFA – talk about underground!) Wankie: Hi Wallacia, great to chat with you. I think we’re all wondering the same thing – what is Performative Aesthetics?

Wallacia Horn-Matton: Yeah a lot of people are wondering that! It’s a pretty specialist field I guess. Because the Gateway@Cofa project is aiming to dissolve all these rigid structures between disciplines like painting, drawing, sculpture, photography, etc, this is a sort of pilot program that doesn’t really specify what medium you use to reach your creative goals. The reason it’s called ‘performative aesthetics’ is because the only stipulation is that you either wear a costume or create artworks naked.

Wankie: Whoa!! That sounds pretty wild – do you find that the performative aspect helps to unlock you creatively?

Wallacia Horn-Matton: Yes absolutely – it just becomes so much more of a free and bohemian kind of vibe, everyone’s really supportive of each other and you do things in a costume that you definitely wouldn’t do otherwise. I also find this methodology really complements the artwork, because sometimes I’ll just think, “oh my god, what pile of cat shit have I just created?” but then if you actually dress up as a cat and make sexual feline performative movements around the artwork then everyone just becomes spellbound and tells you its great!

Wankie: That’s an interesting use of the adverbial ‘sexual’ there Wallacia – do you ever feel like there is a danger of objectifying yourself in a performance such as this?

Wallacia Horn-Matton: Of course! That’s actually the whole concept behind the piece.

Wankie: You mean the pile of catshit and the sexual cat was a real artwork?

Wallacia Horn-Matton: Depends on what you mean by ‘real’. If you mean that substantial pre-documentation, tangible ideas through discussion, and influencing the ways people think about the relationships between felines, female sexuality and piles of shit then it was more real than this conversation we’re having right now, you and me. Anyway what I was trying to say before was that as seemingly ‘empowered’ women we have a responsibility to challenge the dominant belief that being a woman is not equal to being a cat – in fact I suggest you keep this reverse irony in mind when seeing the next batman film.

Wankie: I like your quirky but self-aware interest in Pop Culture! I think that Pop Culture is like, sooo underrated… Anyway lets get back on track! What are your current motivations in your creative drive?

Wallacia Horn-Matton: Cats! No but seriously there is a lot of interesting mythology about cats that has actually influenced the way that cat flaps and litter baskets are designed. When you have these codified objects or apparatuses in your house what you think is a cat-flap is actually a gateway back to a premodern mythological realm where cats ruled the world with the help of female mediums who would interpret there messages through an cross-disciplinary form of dance and poetry… Sorry I just get so misty eyed talking about my art! Although this is my primary motivation at present, I’m also really interested in the ethics of using knitting and quilting as a contemporary art form if you are using the technique to make a subversive costume, and the Third World.

Wankie: What about the Third World?

Wallacia Horn-Matton: I’m interested in it – I find all those cultures really inspirational

Wankie: Yes don’t we all… all those colours and smells… Do you feel that by engaging with Third World Issues you’re able to make a difference?

Wallacia Horn-Matton: I like to think that as an artist I can act as a medium in interpreting all these amazing signals and codes that the Third World have created in a way that is beautiful, and that people in Australia can understand. They have such a deeper spiritual connection over there, its like all they worry about is what they will eat and where the will find shelter. I think that is something we have lost in the Developed World, and why I find Newtown to be a really great place to live, because there are so many people there who have all had life-changing experiences in the Third World who I can relate to.

Wankie: Yes absolutely, although Marrickville is apparently really good for that sort of thing too now. But alas it is time to wrap up! Just one more question – what are you working on now Wallacia?

Wallacia Horn-Matton: I’m working on an interactive performance-based project where I will knit cat-outfits for performers of all different races will wear. The work itself will involve me leading the group of knitted cat people through the streets of Sydney (actually it’s funded by the City of Sydney). I will be naked except for a cat tail. The reactions from the crowd are going to be documented, and this documentation will be exhibited at Galeria Mosca Morta in Dulwich Hill from the 13 – 25 of July. Hope to see you at the opening!

Wankie: Fantastic Wallacia – Wankie will definitely be there in support. Thanks so much for your time and good luck in your future artistic endevours!