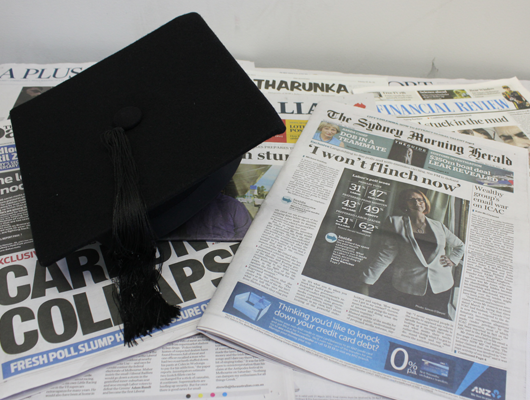 University of New South Wales Journalism students are unsure of where their degree will take them. With an estimated 800 jobs opening up annually for almost 5000 graduates, they say that the degree does not teach a broad enough range of skills and it concentrates too heavily on theory. The degree at UNSW is relatively new, with the first round of graduates finishing at the end of 2011. The university has not been able to provide the number of graduates who obtained jobs in their field, although the former Media convenor and one of the founders and architects of the degree, Louise Ravelli, says she has followed the activity of a few graduates who she knows have found jobs in journalism. However, some of these have been in the Public Relations field.

The industry is notoriously difficult to get into, and students often complete two or more internships during university in order to obtain enough experience to find a job. A shortage of graduate positions means that the application process is extremely competitive.

In March last year, The Australian reported that “at best, one in ten journalism students will find employment in the mainstream media.” But this figure was revised later in April, the new estimate was a mere 30 per cent.

In this scenario, graduates who want to be successful in finding a job need to have an edge over others. Presumably aiming to give students the best chance, UNSW provides a degree based on theory, complemented with practical work.

However, some students still doubt whether this is enough. In a 2007 study by scholar, John Cokley, it was found that 5000 out of the 8000 estimated jobs in Australian media were small newsrooms, often with only a few journalists.

One student, who wishes to remain anonymous, says, “after following the advice of Peter White, I spent more of my time gaining practical experience in the field than studying my theory-heavy uni subjects. Now, it turns out, I am one and a bit weighted-average-mark — or WAM — points under the 70 cutoff to do an internship.”

This student has spent time attempting to gain external experience, but many organisations require insurance.

She says, “I am not permitted to count my work as an internship, and finding external work-experience is difficult, as I am not covered by the university’s insurance. Only students who are enrolled in the specific MDIA3007 or HUMS2000 courses are permitted to use the insurance.”

“As far as I can tell, there is no radio subject, no television subject, and certainly no real investigative journalism subject. Having just begun my third year in the degree, I expected something more gritty. Instead, I am being bombarded with the same crap as before. My elective and General Education subjects are decent enough, but the core subjects are completely copied from the other years,” she says.

The Australian’s estimation was that 800 media jobs would open up annually, while mainstream, masthead newspapers recruited only 100 graduates over 2010-2011.

These figures were published before the job cuts made by many of these same masthead newspapers in June and July.

The total number of students enrolled in journalism degrees in 2010 were 4750. The industry only employs an estimated 9000 journalists. Compare that to the number of graduate positions available, and it seems most students will not obtain jobs in their field.

Students worried about their job prospects ask for more focus on the practical areas of journalism. Some of these would like to enter television or radio journalism and feel that the skills to do this have not been taught to them. Some suggest a longer degree to cover more ground. Many are asking for web design and Photoshop skills to be included in the degree.

At the moment, subjects which teach these types of skills are only available as media electives or free electives, which are limited in nature.

The permanent lecturers who teach in the journalism degree have had some experience in the field and a few are still practicing freelancers, giving them skills relevant to the current media landscape.

Louise Ravelli told Tharunka, “all of our permanent staff have had different kinds of experience in print media, in TV and online — Helen Caple is a photojournalist … the tutors who are employed casually usually come directly from the industry.”

Some students, however, don’t believe this is happening, with some commenting that the degree is backdated and doubting whether the specific skills they are learning are applicable to their futures in journalism.

Senior lecturer and Course Convenor for several first and second year courses, Dr Peter White, believes that the degree does prepare students for the current media industry. He says that it comes down to core skills.

Ms Ravelli supports this, saying, “It’s about identifying the fundamental skill sets that apply more generally … and I think if you were aiming to train people for one thing, it would be so narrow, none of them would get a job.”

The degree teaches the fundamental skills of journalism, as judged by the lecturers. The most fundamental is considered to be communication through writing, as well as for various genres and media types. Most of these however, concentrate on the traditional forms of print journalism. In addition, students are taught research and investigation skills in their first year.

Although students feel they do not learn relevant skills, staff insist that there is an adequate amount of practical work in the degree and they encourage students actively doing more.

Students are given an opportunity to do a Media internship program in their third year, in addition to being able to do an Arts internship from the second.

Dr White told Tharunka,“we would encourage and support to the best of our ability those people doing work experience … we can supply, which is often crucial, workplace insurance for people.” He says that practical experience is “absolutely essential”.

Despite this, students still find it very difficult to find internships in the industry and sometimes to juggle these commitments with the demands of paid jobs and university.

According to Dr White, most students acquire paying jobs through internships and work experience.

He says, “Getting work in the media is all about networks, about contacts.” This is another reason students panic, as often they don’t have the appropriate contacts to get an internship in the first place, and, as with paying jobs, there are limited positions available.