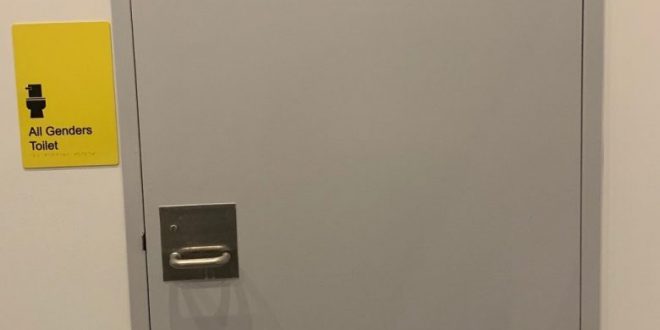 It’s a Privilege to Pee

With 60,000 undergrads,30,000 academic staff and an estimated rate of 1% of the population being transgender, there are 900 transgender people at UNSW at any given time. Realistically, Sydney being amongst the progressive urban hubs of Australia and many transgender people not being formally recorded as trans, there’s more than that. Trans people are great at many things, including handling invasive questions with more grace than is owed and holding their bladders despite all odds. Luckily, UNSW Art and Design (‘A&D’) introducing new all-gender bathrooms brings these skills to the forefront.

Bathrooms are amongst the most prominent battlegrounds of the cultural warfare around transgender, gender non-conforming and non-binary people – but more than that, bathroom useage is a dominating concern for most trans people, with many reporting increased stress, anxiety and dysphoria when using public bathrooms, and even limiting their time in public out of fear of having to use gendered bathrooms. There are a few solutions: better diversityeducation and tolerance-building in the general population; more stringently legislating the safety of trans people in gendered bathrooms; or, perhaps the least controversial and simplest option, introducing more all-gender bathrooms (AKA non-gendered, gender neutral, unisex, or gender inclusive).
‘The Bathroom Debate’ has been growing in intensity for the past ten years, coming to the global stage in 2016 when former USA President Obama’s administration directed that all public schools allow transgender students to use the bathrooms and changing rooms of their gender, rather than their assigned sex. It became a much bigger topic when the administration of Donald Trump (President of the United States of America; protagonist of ‘Trump Temptations: The Billionaire and the Bellboy’) rescinded the Obama administration’s decision.
The Australian chapter of the debate opened in 2016, when the Safe Schools Coalition controversy broke – while a multi-faceted controversy, headlines seemed to revolve around the recommendation by the SSC that schools allow transgender children to use their preferred bathroom for their safety, comfort, and for social cohesion between cisgender and transgender students. It was in this debate the world was gifted with the epithet ‘gender whisperer’. On the 29th of August 2019, the Prime Minister of Australia (Scott Morrison – likes Queensland, about 180cm tall, UNSW alum apparently?) made a statement on 2GB radio that he would be having signs promoting gender-affirming bathroom usage taken down from the Prime Minister and Cabinet offices, calling them ‘ridiculous’, ‘political correctness over the top’, and ‘just not necessary’ as part of the ‘Canberra bubble’ – implying that the request for gender-inclusivity is only really present in highly privileged and politically radical places. Despite this aspersion, it seems that other cities are taking part – with Hobart City Council currently debating as to whether put gender-affirming signage on all public bathrooms, Melbourne introducing further all-gender bathrooms, and indeed in February 2019 The University of Technology Sydney (UTS) assigning ten bathrooms ‘all-gender’, citing that, ‘UTS has a diverse community … It’s important to us that all individuals feel welcome and safe on our campus, and have access to appropriate facilities.’
As of the 25th of October, UNSW has followed suit: Dr. Diana Smith sent an email to all A&D students on behalf of the Department of Equity, Diversity and Inclusion (‘EDI’) announcing that six pre-existing single use bathrooms have been signposted as ‘All Gender’. This new signage is ‘the first stage of a pilot project focused on gender inclusive bathrooms at UNSW Art & Design that will be rolled out across other UNSW campuses.’ The introduction of all gender bathrooms is an exciting step forwards for transgender people at UNSW – though UNSW has strong supports in place for transgender staff, and say that ‘All students are entitled to use their bathroom of choice where they feel safe’, UNSW Kensington currently has no all-gender bathrooms available to students which aren’t first and foremost accessible bathrooms (‘accessible’ here meaning ‘adequately designed for people who make use of wheelchairs, strollers, or other mobility aids’). People who use mobility aids have skills including incredible self-advocacy against monumental lack of support, handling invasive questions with more grace than is owed, navigating terrains better fitted to post-apocalyptic exercise courses than habitable cities, and, indeed, holding their bladders despite all odds.
Arguments about transgender people’s bathroom useage on the grounds of transphobia have been ongoing for years, but without consideration for the other demographic most effected by bathroom availability – people with disabilities. Often the only all-gender bathrooms available are accessible ones, and despite not wanting to take resources away from disabled people many trans people use accessible bathrooms out of necessity when there is no other safe option. Some A&D students have raised concerns that some of the bathrooms now marked as All Gender are simply accessible bathrooms relabelled, and that this will further limit the already limited facilities available to people who use mobility aids.

When asked if the EDI has any concerns about the project, they said, ‘It is a really big project … and many stakeholder groups [that] need to be consulted’. They have been pursuing the roll-out for some time, as ‘part of our ongoing and active commitment to create an inclusive, safe and respectful campus’, with planning including a consultation process and a working group of different stakeholders and representatives.

While there is currently no expected timeline for the introduction of all gender bathrooms at UNSW Kensington and UNSW ADFA at this time, the consultation with stakeholders is ongoing. Students and staff are invited to give feedback on the roll-out directly to the EDI; to date, ‘[the EDI] are pleased to share that the feedback received has been positive’.

If you have any feedback on the rollout of all gender bathrooms at UNSW you would like to be taken into account, please write to the Department of Equity, Diversity and Inclusion at edi@unsw.edu.au

Axel-Nathaniel Rose is a third year Creative Writing student from the Blue Mountains. He has been writing novels since the tender age of five with his debut ‘The Evle King’ dedicated to his brother’s tyranny over the household armchair. Since then, his writing has expanded, with particular focus on queer themes, mental illness and social media. He is also an orator and poet.

Share
Previous A Better Perspective
Next Victory against the IMF in Ecuador – So What’s Next?