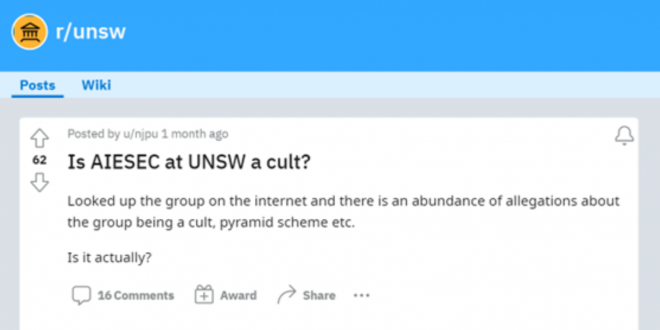 A Reddit post earlier this year attracted some damning comments from individuals claiming to be former members, urging other UNSW students to avoid the organisation. Numerous Reddit posts from other university pages around the world echo this sentiment, and a Quora post featuring one user damningly comparing AIESEC to each of the criteria of the International Cultic Studies definition of a cult.

AIESEC is an international NGO that was set up in 1948 to develop leadership and global thinking in young people. Its name technically stands for “Association Internationale des Étudiants en Sciences Économiques et Commerciales,” but AIESEC is no longer used as an acronym, but simply as the name of the organisation. It’s largely student volunteer run at the university level, with some paid employees at the national and international level. Its Australian website describes its purpose as “Peace and Fulfillment,” with a goal of empowering young people and developing their leadership skills.

Given it’s recognised by UNESCO and operates in over 120 member countries, accusations of it being a cult seem a little farfetched.

VP of Finance and Governance Jose explained to Tharunka that his experience with AIESEC had been about ‘pushing yourself and breaking those boundaries’. He said “my personal motto – as long as you’re uncomfortable, you’re getting somewhere . . . I know an alumni post-AIESEC – they’re balancing 4 jobs.”

One thing that has led to AIESEC’s ‘cult’ label online is its demanding schedule. One redditor lamented that their girlfriend in AIESEC was ‘stressed out of her mind’ and ‘putting in an average of 30 hours per week’ for her unpaid role with AIESEC.

The ex-members said the expected workload for sub-com was 8-10 hours per week, which included a 2-hour compulsory in-person meeting but, in practice, that was only the minimum. Jenny said ‘one of [her] standout experiences’ was a ‘full mental breakdown of stress of completing this one task.’

On the workload of their friends who remain in AIESEC, Taylor told Tharunka “I have no idea how they manage their outside lives with the amount of time they spend with AIESEC; I don’t think they do, really.”

According to Jenny, “In general, the final message was always ‘you have to push yourself to be better,’ and that “those that go up the ranks will talk about how that experience helped them become better people and overcome hardships.”

Current AIESEC UNSW president Alex said for an executive role, “the minimum [weekly time commitment] is 16-20 hours.” He recalled that “some weeks I’ve spent a lot more time than that, up to 30-40 hours – it goes up in peaks and troughs.” While he said ‘it is tough,’ he added it has taught him to manage his time.  “Definitely you do have to compromise, some periods I don’t get to see my family as often, or I don’t see my friends a lot.”

AIESEC has some unique traditions – chants, dances and symbols – which received mixed reviews from ex-members. One such tradition is ‘roll call,’ which is essentially a dance session at the beginning of AIESEC meetings. Jenny described roll call as a positive experience, a way to have fun and get moving. Another ex-member of AIESEC UNSW, Jake*, believed it was pointless. “Like, what the hell,” he said.

Initially, Jenny thought it would be a regular society road-trip or camp, ‘to have fun and get to know people and do activities throughout the day’. She said the reality of the situation was very, very different. “We would wake up early in the morning, walk down to this place, and just sit there for hours listening to people talk until late at night.”

It featured an entire session teaching the new recruits ‘how to talk about AIESEC’s products to people,’ something Jenny felt to be pyramid scheme-like.

“We got there at 2pm – until like 6 or 7, it was just 5 hours of explaining what AIESEC is and why it’s so good,” Jake recounted. For the next 2 days, it was the same thing – lectures from 8am until lunch, then the same thing in the afternoon, and at night until 9-10pm, during all the lectures people would sit cross-legged on the floor, Jenny and Jake told us. Session topics included ‘what is peace and fulfillment?’, and ‘what is leadership?’ Talks were delivered by higher-up AIESEC members who recounted their life stories and experiences with AIESEC. Jake recalled being allowed to pick breakout rooms, or ‘tuts,’ where talks were given by AIESEC presidents from various universities.

“I remember the first night, they made everyone very vulnerable – everyone’s like crying, telling everyone their deepest insecurities.” Jake told us that about 90% of his friends who joined AIESEC left after the camp.

While the conference was not compulsory attendance, Jenny said it was heavily pushed to subcom. “My expectations [of what the camp would be] were definitely subverted.”

The current execs both spoke highly of their experiences with AIESEC, and its capacity to develop students’ skills and become more globally conscious citizens and leaders. Alex recounted his favourite parts were the unique opportunities to work with people from diverse cultures.

He said that this presented unique challenges with language barriers and had been a useful and eye-opening experience of “learning to communicate and making sure that everyone can understand each-other.”

Jose also said that his involvement with AIESEC had given him a better understanding of industry, and that the guidance and support he had received through his involvement in AIESEC, and as an exec, had really helped him. “Sometimes I see systems when I’m working and I think, that’s so similar to AIESEC.”

Jenny said that she didn’t regret her experience.  “it’s quite welcoming and the people there are genuinely good.” She said the frequent in-person meetings had led to a ‘stronger sense of community’’ than in other societies.

Having been a little suspicious of the organisation from the beginning, she said “I was aware what I was getting into.” She said  multilevel marketing culture was something of a point of intrigue for her. “I used it as an opportunity for life experience.”

“I should’ve just left after the induction camp,” Jake told us. “It was just a bit full on.”