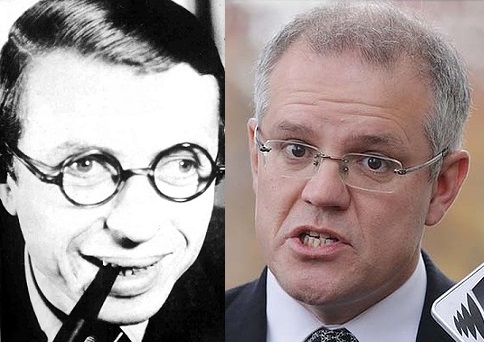 Jean Paul Sartre and Scott Morrison: peas in a pod?

A book club in Sydney’s Inner West has lauded Scott Morrison as a savant following the Minister’s comments on the seminal philosophical work of Jean Paul Sartre, ’Being and Nothingness’.

The Minister for Border Protection and Immigration was in Newtown this week with NSW Premier Mike Baird, jointly unveiling a new childcare centre which will double as a border protection facility enabling toddlers to stop the boats via remote controlled drones, when he made the comments regarding the phenomena of being and nothingness which jointly constitute the human condition.

Several members of the book club were seated on milk crates nearby for no discernible reason, in a chance encounter with Morrison that book club president Xavier described as “the karmic endpoint of seven lifetimes of reincarnation”.

The outpouring of existential wisdom by Morrison was sparked by an intellectually rigorous interlocution between the Minister and the media present at the press conference.

“I can neither confirm nor deny that this is a facility in which tiny children will be encouraged to launch missiles into boats containing asylum seekers; nor that this is an exceptionally cost efficient use of government resources to protect our borders, entertain toddlers, and develop their fine motor skills in one fell swoop; nor, indeed, that we are deliberately gathered here today at a press conference, given it is equally likely that this is a happenstance doorstop and I am merely passing through a crowd of journalists,” Scott Morrison told the gathered media outlets.

When asked for clarification, the Minister responded with a small correction. “I would like to revoke your memory of my previous statement, because I misspoke. When I referred to the drone operators as tiny children and toddlers, I in fact meant to say ‘almost-adults’. If you are experiencing difficulty correcting your memory of this event and accepting this new reality, a member of my Border Force will be more than happy to help you with this,” Morrison said, with a smile that would later be described by attendees as “disturbingly salacious”.

“But sir, reality really can’t be edited retrospectively like that,” said a journalist from the Sydney Morning Herald who, incidentally, has not been seen since the day of the press conference.

“My dear man, in the phenomenon of being, there exist two types of reality which lie beyond our conscious experience: the being of the object of consciousness and that of consciousness itself,” Morrison replied. “To draw upon the work of my preferred existential philosopher, Sartre himself, these define two types of being, the in-itself and the for-itself. To bring out that which keeps them apart involves understanding the phenomenology of nothingness. Capisce?”

The press conference was at this stage momentarily interrupted by a journalist letting out a bloodcurdling scream, rupturing multiple veins in the process and resulting in his immediate transfer to the Royal Prince Alfred Hospital.

He has since quit his job to pursue a latent lifelong dream of becoming a DJ.

After waving off the ambulance containing the journalist-cum-DJ, Minister Morrison continued, “What you’ve just seen perfectly illustrates my next point that consciousness is essentially characterised by its power of negation. The power of negation is an intrinsic feature of the intentionality of consciousness. This is not a press conference. This is also therefore not a childcare drone facility.”

His comments were later hailed by the book club members present as “an extraordinary reflection on existential phenomenology” in a review of the press conference posted on the club’s Tumblr.

“The Minister has shown unprecedented depth of thought befitting of a man charged with metaphorically patrolling the deepest depths of our ocean borders. Five stars,” raved the review.

When asked to provide a comment on the events of the press conference, or to perhaps comment on his opinion of Sartre, Morrison replied, “No comment.”