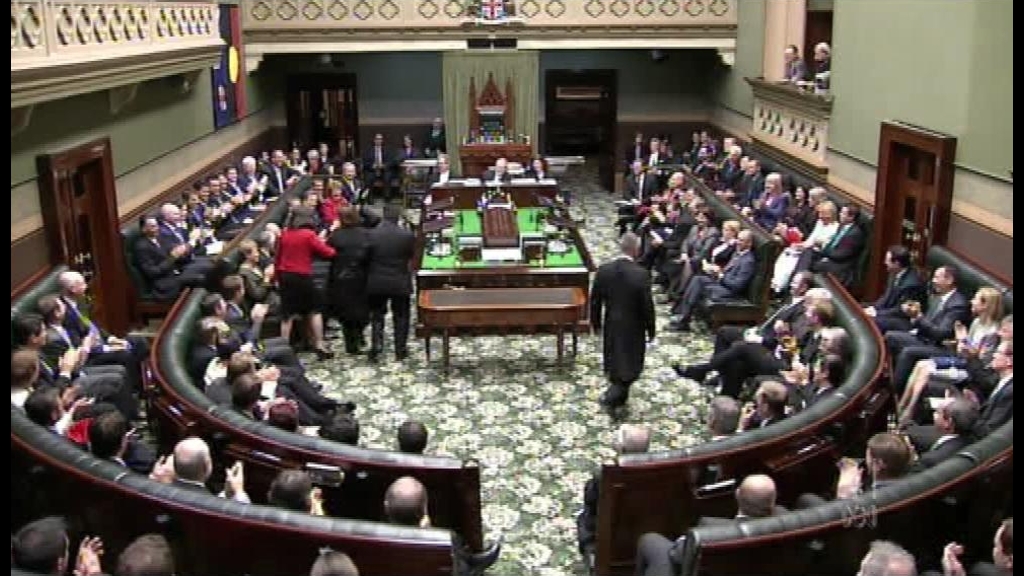 In related news, democracy in NSW sculled half a beer, before proceeding to pass out in a pool of its own vomit.

The legislation, the Liquor Amendment Bill and Crimes and Other Legislation Amendment (Assault and Intoxication) Bill were first seen by Parliamentarians at 10 a.m. Thursday morning; the ink still drying from what could only have been an all-nighter in Parliamentary Council. The laws bring with them an eight year non-parole period for the new offence of an assault causing death under the influence of drugs or alcohol, as well as placing new conditions on over 900 venues in the Sydney CBD area, and restricting the sale of alcohol from bottle shops until 10 p.m. across New South Wales.

While the latter is unlikely to affect preloading purchases from the bottle shops owned by the big supermarket chains, the provision will also extend to small specialty businesses. Tharunka spoke to Nathan Besser, co-owner of popular delivery service, Jimmy Brings, who said, “licensing legislation doesn’t adequately define our unique operation; we have been caught in the crossfire and will be forced to close at 10pm”. This will see their distribution hours cut by 30%, and a 50% loss in revenue. They have already written to the Premier to seek an exemption.

Other controversial measures include increased penalties for offensive behaviour and language, which the Deputy Opposition Leader Linda Burney said would most negatively affect young and Indigenous people, as well as people suffering from mental illness or disadvantage. She said this while supporting the aforementioned changes. Notably, there is now an $1100 fine for disobeying a move-on order, and a $500 fine for swearing in public.

While the Greens put forward a few Hail Mary amendments in the last minutes of the debate to try to remove these increased penalties for summary offences, they were rejected by both the Government and Labor.

The process wizardry was not limited to the Greens, with Lake Macquarie MP Greg Piper (IND), attempting a classic manoeuvre which would replace all the words of the legislation with a clause for a Parliamentary committee to review it instead. This too was sadly, yet predictably, rejected.

All these changes occurred in less time than it takes me to book a domestic holiday. This is not so surprising, given that a) I get a bit lost on Expedia, and b) the Opposition announced they would be supporting the legislation even before they had seen it.

While Labor were quick to take credit for the adoption of the ‘Newcastle solution’ of lock outs and last drinks within the legislative package as a part of their ‘Drink Smart, Home Safe’ policy, members of the public and press gallery could only watch on in a queasy mix of horror and giggles as every single Labor member used their time to find a new way to condemn mandatory minimum sentences, before agreeing to vote for them.

“There is considerable evidence that mandatory sentencing is counterproductive and does not work. Mandatory sentencing has been tried before in New South Wales and failed… it was such an abject disaster that it was hurriedly repealed” – Mr Paul Lynch MP

“No right-thinking person believes that mandatory sentencing is an appropriate response, particularly under these circumstances, because it produces injustice” – Mr Ron Hoening MP

Even if they supported every sentence of the Liquor Amendment Bill, and felt politically wedged by the mandatory minimums package, they didn’t put forward a single amendment, or support any amendments. Though it is normal to end up compromising on issues and voting for things you don’t agree with completely, what happened today was not compromise – this was a rubber stamp.

It’s not all Labor’s fault though; even the Attorney General Greg Smith is on record calling mandatory minimum sentences “an expensive and ineffective crime fighting tool”. He added a corollary, however, saying that if community expectations did not match the sentences handed out by the judiciary, “we must have an informed debate about the issue”.

And he’s right – we do need an informed debate about the issue. But we didn’t get one.

Instead, we were given a Parliament dragged back from their summer break. We had legislation written by the Daily Telegraph, and changes to normal Parliamentary procedure which the Shadow Minister for Health and Liquor Regulation, Dr Andrew Macdonald criticised, saying “debate has been effectively gagged”. The Government was still making changes to the Bills after they’d been introduced. Protesters showed up not fully knowing what it was that they were protesting.

When the MPs for Sydney and Balmain, Alex Greenwich (IND) and Jamie Parker (GRN) questioned the possibility of displacement of violent people from the CBD to other areas, the Premier accused them of “running a scare campaign”. The Premier mocked Greg Piper’s surprise at the scope of the Bill (of course he was surprised – he had only just read it because the Premier had only just finished writing it).

This is a complex issue that deserved a real debate. As the Premier stated, the relationship between alcohol and violence is “a problem that has existed here since the First Fleet arrived 226 years ago and celebrated their arrival with a drunken bacchanalia on the shores of Circular Quay”.

In referencing cities like New York and Copenhagen, Greens MLC Dr Mehreen Faruqi said, “We have evidence from across the world that the provision of convenient and frequent late-night transport is a key factor in preventing violence and injury”.

Labor’s Penny Sharpe insightfully commented on alcohol advertising around the city: “For example, a giant bottle of vodka with the words, “Arrive boldly”. If that is not an ad for preloading, I do not know what is.”

Opposition Leader John Robertson thought businesses could be encouraged to be a larger part of the solution, with “risk-based licensing, providing hotels and bottle shops with a financial incentive to operate safe premises”.

Rather than comprehensively addressing any of these issues, we had an intentionally rushed debate on legislation poorly considered. The phrase ‘unintended consequences’ worked its way in to Chambers eleven times, as in ‘I’m pretty sure these laws are going to have unintended consequences like locking up disproportionate amounts of young and Indigenous people, but it’s not like we can change the law, right?’

In an environment where we often lament at how long it takes governments to make changes already agreed upon by the public, it is shocking that NSW criminal law could undergo such a fundamental shift with such velocity. There is infrastructure in place for issues in crisis or flux that need a prompt response, but it is odd to think that a problem which has existed since the First Fleet was going to be resolved in an afternoon. As Alex Greenwich put it, “We need the right solution, not the right now solution.”

Government is slow – at times painfully such – but this slowness is necessary; it is a reflection of health in an active democracy where everyone has a say, and everyone theoretically has an informed vote. Legislation is supposed to be built on consultation. MPs are supposed to take it to their electorates; the Legislative Council is supposed to engage with experts and interest groups. Democracies are more or less stable places precisely because we engage in protracted debates until 11 at night between these groups, rather than having dramatic overhauls in our laws overnight. And yet today, Legislators passed rushed laws in the same time as you allocate to your rushed gen ed essay.

And if you vote Shooters or CDP, you’re probably bonkers or racist or both. You’ll fit right in with the paper that’s running the country.