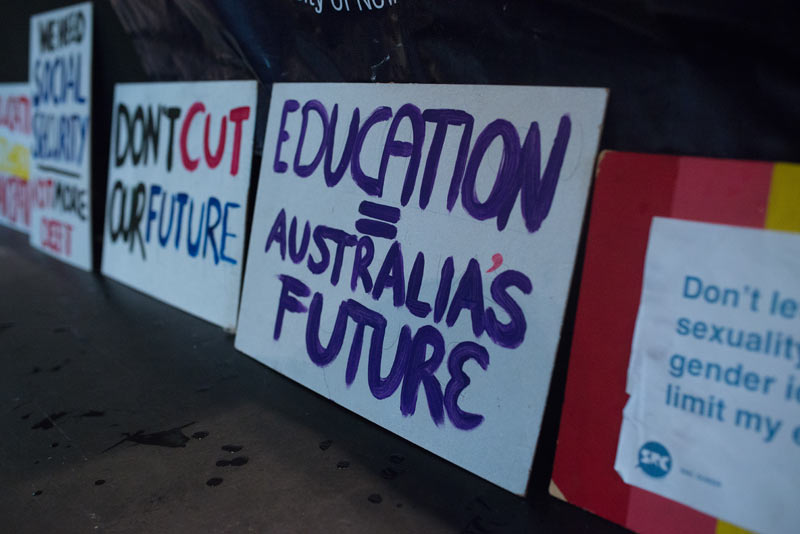 Increased fees on the horizon as students hijack Q&A Benjamin Hammond, member of the NSW Education Action Network of students, said the protest was designed to give a voice back to young people, who have until now been largely ignored by the government in the higher education debate ahead of the Federal budget announcement next week.

“Christopher Pyne and the Liberal government have an extreme agenda for education. He wants to emulate the U.S. system which has entrenched students into a future of debt and poverty,” Hammond said.

“We’re frustrated. These decisions impact on young people more than anyone, and if they don’t want to listen, we’ll just have to make them,” he continued.

The protest follows Education Minister Pyne’s comments on ABC TV’s Insiders program last week expressing support for increased fees for university students, at a time when the average HELP debt is $15,200 and takes over eight years to repay—a significant increase from the mid-1990s when the average repayment time was four years.

Pyne had earlier told an Adelaide radio station that students paying back 41 per cent of their education costs as HELP debt is “too low” due to future career benefits accrued to university graduates.

Deanna Taylor, President of the National Union of Students, told Tharunka that student contributions to their education are already the sixth highest in the OECD.

“To suggest that students aren’t paying their fair share and need to be paying more is quite outrageous,” Taylor said. “The National Union of Students has great issues with the government’s intention to move to a US-style system given that in the US there is very clearly a two-tiered system of Ivy League universities that charge hundreds of thousands of dollars, and lower quality community colleges and private providers which are all that students from low socio-economic backgrounds can afford.”

Pyne’s comments echo his speech to a right-wing London think-tank on April 28, in which he indicated the government would not be consulting on higher education matters in the Federal budget beyond considering the recommendations of the Kemp-Norton review and Commission of Audit.

Among the recommendations proposed by the Kemp-Norton review are the scrapping of the 20 per cent enrolment target of students from low socio-economic backgrounds by 2020, as well as the opening up of Commonwealth-supported places to private education providers. The review also proposed the imposition of a 10 per cent loan fee on HELP debt, which would increase the cost of degrees between $2,000 and $7,000.

UNSW SRC President, Joel Wilson, said the abolition of the low socio-economic status target would allow universities to maintain that they are accessible despite pursuing only the elite, adding that the expansion of Commonwealth-supported places to private institutions will place upward pressure on student fees.

“Expanding grants to private providers would mean a drop in funding per student… Students will be the ones paying for the expansion of Commonwealth-supported places to private providers through an increase to student fees via the deregulation of university fees and imposing a flat 10 per cent loan fee on HELP,” Wilson said. “Education will be unaffordable for any but the rich and those willing to bear the increased debt burden.”

NUS President, Deanna Taylor, agreed. “What we don’t agree with is that students will cop the cost of subsidising private universities that are largely driven by profit, as opposed to investing higher amounts of money in public universities.”

Released shortly after the Kemp-Norton review, last week’s Commission of Audit has also proposed further drastic changes to the higher education sector, calling for student higher education contributions to increase from 41 per cent to 55 per cent of fees, with a higher interest rate on HELP loans, and the reduction of the HELP debt repayment threshold from $51,000 to the minimum wage of $32,354.

Taylor said these proposed fee increases will hit the two-thirds of Australian students living in poverty the hardest.

“Increasing student contributions to 59 per cent equates to an approximate 34 per cent increase in fees. Australia would have the highest student fees and lowest government contribution in the OECD if these reforms go ahead,” she said.

According to Greens education spokesperson, Senator Lee Rhiannon, this form of fee deregulation will create an unequal, elitist education system.

“The Abbott government is already trying to ram through $2.4 billion in cuts to universities,” Senator Rhiannon said. “The cuts will increase the debt of the most disadvantaged students by up to 50%, with student debt projected to skyrocket over the next decade.”

Multiple Group of 8 (Go8) university Vice-Chancellors, including UNSW’s Fred Hilmer, have backed the recommendation for increased fees, arguing that maintaining the HELP system and increasing scholarships for disadvantaged students will offset any inequities of the scheme.

In an op-ed for the Sydney Morning Herald on April 23, Professor Hilmer claimed that “the evidence is that as long as we maintain the HECS system there should be no impact on access – plus there would be significant scholarship support for disadvantaged students.”

Taylor agreed. “HECS is designed to support students in paying their fees; it’s not designed to allow universities to charge whatever they want and pass exorbitant costs onto students.”

“These issues affect all students; undergraduate, postgraduate, and international,” Bruffey said.  “These proposals will erode the best aspects of Australian higher education in favour of a user-pays-most model like the United States.”

With the largest shake-up to the higher education sector in years projected for next week’s Federal budget, student demonstrations have been planned across Australia to respond to the likely fee increases resulting from the budget.

At UNSW, the SRC will hold a speak-out and rally at midday May 14 on the Library Lawn, an event Bruffey encouraged students to attend.

“Fee deregulation would see UNSW become an elitist institution where students are enrolled based on wealth rather than intellect. Students should attend the May 14 rally and get involved in future SRC Education Collective campaigns. It’s only by forcing our protest into the public arena that a fair and sustainable outcome can be achieved,” he said.

Previous The biggest winner is still the academy
Next Shortlist #6