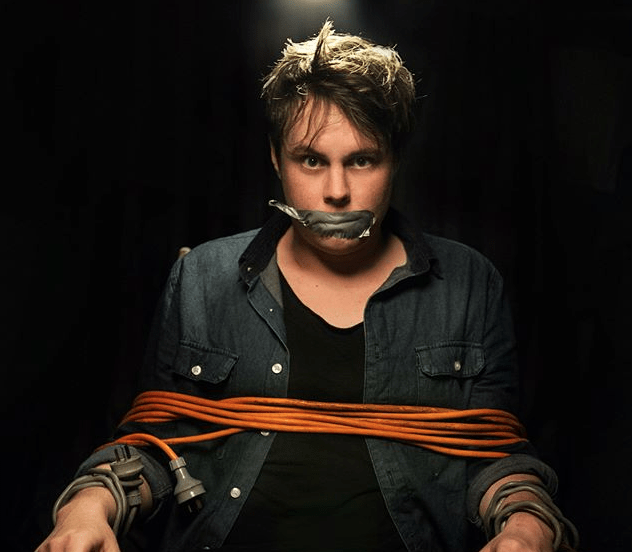 In Conversation With: Chris Leben

Chris Leben is a comedian, writer, director and producer mainly known for his work with The Feed on SBS. He’s also the mastermind behind popularising the “character” of Lee Lin Chin.

Recently speaking at the TEDxYouth event in Sydney, Chris focused on how he turned a respected newsreader into a comedy star. And why exactly has it been such a success?

“Because the character depicts an older Asian woman in a position of power,” he said.

Chris reminded us that as 40% of Australians don’t trust mainstream media, we’re turning to comedians like John Oliver and Shaun Micallef for our news. Lee Lin is a charming mix of the two.

I caught up with Chris after the TED talk.

So why did you just carry Lee Lin off stage “just hitched” style?

That’s based on a story that came out the night after the Logies – the next morning after the Logies there was a report that Lee Lin was so drunk that she was carried out of the after party. Now I can tell you for a fact that is not true. I was so drunk that I lifted Lee Lin up and carried her out of the party. She was stone cold sober! We had to put out a press release that I was the drunk idiot and not Lee Lin. I just fucked up.

I know, and yet she still plays with me…

So just on that, how involved is Lee Lin in the creative process?

It’s kind of like … I would write the script then give it to her on the day and then she would tell me what she was and was not comfortable saying, and then she would re-write some of the lines to be more “Lee Lin” genuine. A lot of the words in the TED talk I would never write because I’m a simpleton. But Lee Lin likes to remind me she speaks the Queen’s English.

I guess she is a respected newsreader after all.

Yeah yeah, and she also went to a private Catholic school in Singapore where all the teachers were wealthy ladies of leisure who donated their time to be teachers. She adopted their accents and language. And also, all she does is read. That’s the only thing she cares about – she’s constantly re-reading Shakespeare and [William] Faulkner.

So a lot of the jokes are based on her true personality?

Yeah! The best comedy comes from exaggerating the truth – I did hear that story about Lee Lin going to backpacker bars to pick up international hotties, but I don’t think it’s true. And Lee Lin has told me that it’s not. But she does love fashion and beer.

Is it ever the case that you come up with something outlandish and she’s vetoed it for being too unlike her?

Yes – swearing! She won’t swear. I’ve heard her swear twice. Once, I begged her to do it. It was for our TV pilot and I thought it would be a really funny moment – it wasn’t that great in the end … She was not happy and kept trying to convince me not to do it. In retrospect, I probably should’ve listened to her. Another time when I said “fuck you” to her, she said back to me “No! Fuck me, fuck you!” And that’s the only time I’ve ever heard her use it in a conversation.

Was that a private quip or on stage?

No, just the two of us at the pub!

Has she ever come up with the controversial ideas?

Nothing so much controversial, but at the Logies she came up with the idea to take one of her makeup artist’s sons down the red carpet with her. He was dressed in a tuxedo, they had matching flowers on, all her idea, and she coached him to tell every journalist as they walked up the red carpet that he was something different. He’d be like “Oh I’m Lee Lin’s son”, the next one “Oh I’m her manager”, or “I’m her personal trainer, I keep her fit”. That was all her idea.

The plan was, if she won the Gold Logie, he was going to give the speech for her. So I had to carry a milk crate with me all night at the Logies, just in case he had to go up and accept it. Lee Lin was just going to sit back and not leave her seat! I was going to have to run up, put this milk crate down, pick this kid up and place him on top of it. It would’ve been pretty cute … I can’t remember what the speech was – Lee Lin and I co-wrote it and we wrote it in her voice, so it would be coming out of this 9-year-old boy. We thought that would be quite funny.

What a lost opportunity! You mentioned the fact that the best comedy comes from exaggerating the truth – how did you first get to know each other, to learn that truth of who she really is?

I didn’t know her! I didn’t watch her on the news, I literally started writing the character based on a few bits and bobs of detail that I got from the people who worked with her. You can watch in those early sketches that we did [for SBS’s The Feed] … the character is not the same as it is now, and that’s because I didn’t know Lee Lin. I was writing for someone that I thought I could get to do all these ridiculous things, and that wasn’t the case.

In the first few episodes, she’s an alcoholic who drinks whatever – she drinks wine, she drinks beer, she drinks spirits. Lee Lin hates every single drink except beer. She will never let it touch her lips. So you slowly learn those things. Just as you learn her great love is William Shakespeare, and then you start writing that into it. There are always these little things that you hear, or she’ll tell me family stories about how she did X thing and that ends up being in the script.

Our interview was then (fittingly) interrupted by Lee Lin herself, demanding to know where her driver was.

“Wilkins won’t be here for another 20 minutes.”

Share
Previous The Case For Tharunka Elections
Next Gender Identity at a Morphosyntactic Level: English and Spanish