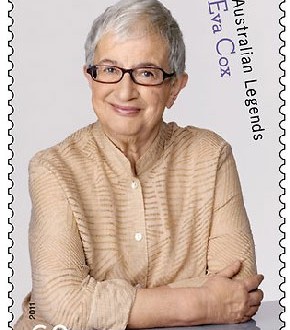 If I Ruled the World with Eva Cox

Writer, activist, feminist, academic, sociologist and Q and A regular Eva Cox tells Tharunka what she’d do if she ruled the world…

Where would I start? Let’s start with my objective: I want us all to live in a world where people count more than money! What matters in our lives are friends and family, relationships with others, a sense of belonging, enjoying living in communities that distribute life chances and resources equitably, feeling safe and valued, and being optimistic about the challenges of changes. These are just some of the markers of what I call a more civil society: one that builds on good human relationships, trustworthiness of those in power, and respect for diversity and fairness.

I want to change political priorities to making of good societies rather than growing the economy. This approach would replace most international and local political structures’ current over-emphasis on market forces and neo-liberal self-interested individualistic greed. If you need any evidence of the dominance of economic assumptions as the basis of most policy from major parties, look at current election debates and what is on offer.

Both major parties talk mainly about the economy, and are addicted to the basic market model. To attract voters, they compete to cut taxes and offer bribes. They compete for being the meanest spender by reducing social supports and pushing jobs: make the underpaid and unemployed look for non-existent jobs, punish sole parents who do not earn enough, and undermine the collectivist ethos of Indigenous communities so they take on mortgages and become individualistic too. They want more women in paid work and doing longer hours to deal with lack of super. Everything they offer, even Gonski and the NDIS, are sold as getting more people into paid work!

There is little good social policy even on offer because neither cares about social wellbeing, inequality or the exclusion of the needs and rights of many groups. The focus of most promises and threats are about deficits and debts, creating fear of cuts to personal income or increased taxes. Voters are defined as punters/consumers to be bribed and scared financially to ‘buy’ their votes! Only the Greens try to address social issues, not just financial ones.

Therefore, I want to change priorities by putting social wellbeing high on the political agenda. As a big picture person, I think I’ll start from the top and change the institutions that currently dominate and determine finances and trade. This means replacing the World Bank and the International Monetary Fund with the World Social Wellbeing Fund. The objective of this new Body is to work with the UN to set new social goals, to be adapted and adopted by all nation states, based on feminist gender equity principles.

Why put gender up there? My feminism isn’t about equality with men on current terms. It is about changing priorities so we value the social sides of life. Economics is a macho discipline, based on money and trade, the areas associated with men, particularly in the industrialised, globalised, digital nations.

The concepts of capital control, finance, trade, defence, employment, financial and material rewards were devised by, and run for, the interest of powerful men and are defended by their power institutions. The shortest way of undermining this materialist dominance of policy and politics is to demand a shift in priorities to feminised areas such as families and communities, based on social connections, care, nurture, reciprocity and mutuality. These feminised responsibilities are currently undervalued as ‘soft’ and quality related, rather than ‘hard’, quantitative and able to be priced.

Therefore, putting a priority on feminised areas means recognising the value of being socially linked as core to our social well-being. This is a radical feminist approach that goes back to the women’s liberation movement which demanded the revaluing of those areas allocated to women to make them at least as important as those claimed by men. Having seen the damage of rising macho economics from the eighties onward, I am now putting the feminised roles up as the most important.

Revaluing social connectivity, as a priority, will determine how financial and other resources will be distributed and redistributed to ensure social and emotional, as well as material, needs are met fairly. Fixing the gender biases does not suggest that women are naturally nicer and would fix all wrongs, because both sexes are equally capable of being good and bad. However, the gender lens sums up the clear case for a major shift of what should matter in a good society.

By recognising the value of feelings, reciprocity and mutual care for others, as well as creativity and engagement, it prioritises the nurture of the young, care and supporting each other, and equitably meeting the material and non-material needs of all. While such societies would still need to look at the funding needs and investment of capital and markets, these interests would no longer dominate the political power structures, and would be a means, not an end, in themselves.

Yes, this is a utopian dream, but maybe that is what is needed to galvanise people into political change. Action may need the inspiration of ideas that are irrationally possible. There seems to be limited current signs that people feel optimistically that futures will be better than the past. That was a widespread belief in most of last century, so drove us to make sure progress was possible, if not inevitable, providing we took action. The present zeitgeist , even among those who label themselves as progressive, is much more likely to focus on stopping things getting worse rather than making them better.

Proposals for radical or major progressive changes to current political and policy priorities are very thin on the ground. There is much analysis, many complaints and anti campaigns, but few serious debates or big visions for the future. Most public debates have been knackered by the dominance of market economics claims that the only way forward is greed driven markets providing wealth, and that is all that matters.

I want to change the policy dead hand of current political institutions, so I would start at the top to legitimise these ideas via the most powerful institutions for setting international standards. This would give us all some space to think through and push up ideas for setting up a good society. The battle is for long-term changes, as the gendered biases of public policies come from the multitude of patriarchal traditions that underpin most social systems, reinforced by the neo-liberal paradigm shifts of the last century.

This shift from social to economic models in the eighties undermined the many collective social movements of the previous two decades. Hopefully, by reversing the process via a good dose of radical feminist analysis, it would validate the incompetence and false assumptions of the flawed market models that drove the recent global financial crisis. There is another sign that change is needed.

So what I would do if I ruled the world, even if only briefly, is a tempting title for someone who has spent far too much of my long life trying to change the world, or at least that bit I felt I could influence! Undermining macho power is a long term personal commitment, which started when a kindergarten teacher told me, aged three, that drums and cymbals were for boys and girls could only have a tambourine or triangle. I still remember my deep disappointment and anger as these made little noise. Why were my choices to be limited because I couldn’t pee standing up, I thought then, as this was the only differences to show up at that age.

I was therefore fully primed by the time the second wave of women’s movement appeared in the late sixties and took off here in the early seventies. Women certainly, at that time, were very much the Simone de Beauvoir second sex: defined by men as ‘Other’ . So I became an active member of the women’s movement and started what I hoped was a long but steady process of changing the world so our gender did not decide what we could do and what we wanted to do. This meant undermining the control of men and who defined what.

We fixed the legal barriers, but then the changes slowed, stopped and are now going backwards. So I want to continue that feminist revolution and redefine what counts: shortening paid working hours, encouraging and supporting more contributions of unpaid work, and valuing the skills and time spent nurturing the young and supporting those who need care. These are just some of the social contributions that are undervalued or ignored.

Give me the power to run the world, and I will create the next (feminist) revolution which puts good social priorities high on the political agenda for the benefit of all (except bad economists and their true believers).