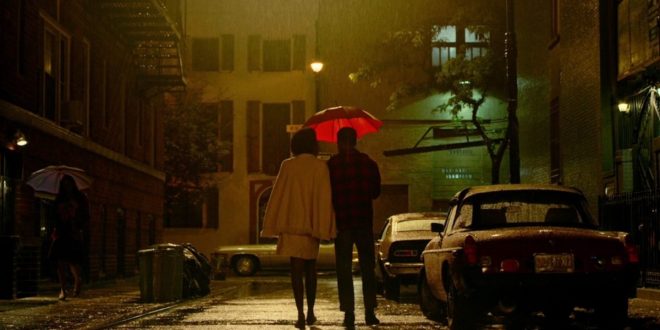 Barry Jenkins’ If Beale Street Could Talk penetrates the murky waters of racial politics unlike any other film (that I’ve seen) recently. Rather than conform to the recurring techniques of Oscar-bait films that use race as a buzzword, Jenkins portrays a powerful and emotional film that plays out more like visual poetry than a conventional story. The film explores the spellbinding romance of two young lovers, who find the strength to overcome the systematic barriers they face merely for existing. Jenkins expertly narrates the story through the voice of Tish (Kiki Lane), who delivers a surprising and engaging perspective as one of the few women to narrate a Hollywood film. In contrast to Spike Lee’s Blackkklansman, Jenkins makes the expert decision to highlight the intersection between women and race, as well as to focus on the lives of his characters, particularly the film’s protagonist Alfonso ‘Fonny’ (Stephan James), which better exposes the fundamentally flawed and racist system that has an all-too familiar relevance to the world we live in today.

Perhaps one of the most enchanting and liberating aspects of Jenkins’ film is his attention to the importance of family intimacy. Liberating because rather than being fed an accessible narrative, we witness the (sometimes criminal) lengths that Tish’s parents are willing to go to in order to pay for expensive lawyers to release Fonny from prison.

“These are our children and we’ve got to set them free.”

During a poignant reunion between Fonny and his childhood friend, Daniel (Brian Tyree Henry), we are privy to their good-humoured banter, broken up by Danny’s sudden choking up when reliving his experience of incarceration as an African American man. It is a true testament to the skills of these two actors that they are able to explore male intimacy so authentically despite later making the conscious decision to hide their emotional exchange when Tish enters the space, exposing the carefully constructed façade of male identity. Interspersed with these intensely charged moments, we witness the humour within the relationship between Tish and Fonny’s incompatible families which suddenly turns to horror when Fonny’s father hits his mother in the face. We are reminded of the dangers women of colour face when they are perceived as outspoken or inconvenient, which is translated into shame on-screen, as Fonny’s mother turns her face away and hides behind her daughters.

Jenkins ensures that we are able to read the tension and emotion in the scene merely through one close-up on an actor’s facial expression. With hypnotic focus, Fonny’s desperate eyes and tensed facial muscles warn us that he will explode once hearing from Tish that his court case is becoming hopeless. He is caged in by the small prison phone box, and so the reaction lasts all of five seconds before he is forced to reign in.

“I hope that nobody has ever had to look at anybody they love through glass.”

Similarly, the hardened eyes and twitching mouth of the woman who accuses Fonny of rape suggest her defiance intermixed with pain when her account of events is questioned, forcing her to relive the experience. The affinity between Jenkins and cinematographer James Laxton allows viewers to immerse themselves in the visually gritty lives of the characters, revealing the heart-breaking reality of remembering trauma and its physical impact on the lives of those forced to find a way to coexist with it.

In one of my favourite scenes we rotate around Fonny slowly as he sculpts with clay in the middle of a darkened room, the smoothly moving camera is left to capture a long exposure of drifting cigarette smoke combined with the underwater echoes of a persistent saxophone solo. We watch this sublime scene entranced, as he uses his hands to sculpt a large block of white clay, wondering how his life could have turned out if he had not been targeted by local police for a crime he potentially did not commit. Throughout the film, Jenkins never forces us to assert whether or not Fonny is guilty, but rather question the consistent setbacks he and Tish face as a young couple attempting to lead a normal life.

The film delivers a less conventional approach to the issue of systematic racism than something like Boots Riley’s Sorry to Bother You, and so in its attempt to show all of its facets, often falls into the trap of showing short beats of action, rather than working through a political approach to fully explore these complex social issues. Thankfully, Jenkin’s vision is realised through a phenomenal ensemble cast who share his desire to reach a heightened intimacy between viewers and characters. In response, we feel like we are awash with constant thoughts and feelings, aided by Nicholas Brittel’s incredible score, that leaves us physically spent by the end of the film. In the follow-up film to his Academy-Award winning film Moonlight, Jenkins continues to master the art of visual poetry and I cannot wait to see what more he has to offer.

Share
Previous Endgame: How space-age ‘colonisation’ ignores the history of Indigenous dis-empowerment on Earth
Next Brown Mem Sahib and River of Smoke