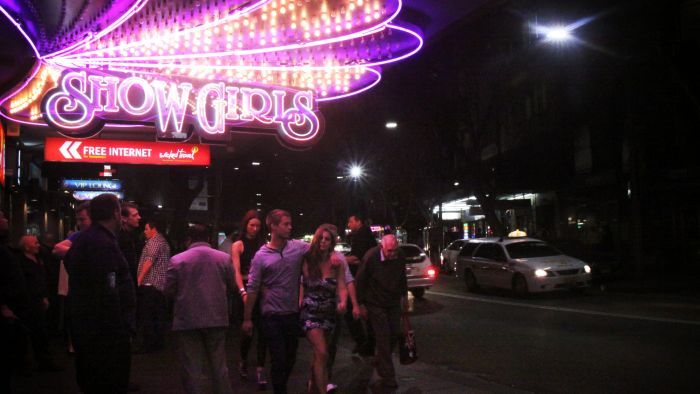 The tragic death of teenager Thomas Kelly earlier this month has reignited debate about Australia’s “booze culture” and the level of violence in our society. Kelly died after being struck in the head by an assailant, now identified as 18-year-old Kieran Loveridge, late on a Saturday night in Kings Cross.

Immediately following the outpourings of grief from family and friends, politicians, academics, and senior police officers began pointing fingers, looking for something or someone to blame for the culture of rampant alcohol fuelled violence that allegedly holds Sydney in its grasp. They blamed, at various times, young people, other politicians and the proliferation of drinking establishments – in particular the rise of small bars. The very first opinion pieces written about this most recent violent attack focused heavily on a perceived rise in violent crime, particularly in Kings Cross, even as they somewhat ironically leaned on the Cross’ infamous past as a long-time entertainment precinct and hub of organised. At a forum organised by local politicians, soon after Kelly’s death, to discuss violence in the area, one speaker blamed young people’s attitudes towards alcohol for increasing violence.

The Assistant Police Commissioner, Mark Murdoch, made the following comments:

”Young men go out with the intention of belting someone. They haven’t had a good night out unless they have been in a fight,” he said.

These naive, although sometimes well meaning, criticisms of “youth culture” are interesting because they ignore both the history of the area and the current statistics. Even when they do take into account the history of Kings Cross as an area known for its violence and links to illegal industries, it’s done in a quaint “oh look how fascinating the olden days were” way, ignoring that historical social context continues to influence what sort of activities take place around The Golden Mile.

I’m not suggesting that just because Kings Cross has historically been rife with violence we should excuse any violence and murder that takes place today, but that suggestions that violence is on the increase and young people are to blame should be looked at carefully.

Figures collected by the NSW Bureau of Crime Statistics and Research show there were 213 assaults in Kings Cross from 2010 to 2011, down from the 240 for the same period a year earlier. The number of alcohol-related assaults was also down, from 182 in 2010 to 167 last year. While rates of assault remain high compared to other areas in Sydney, they do shed factual light on the developing narrative that young people are becoming more violent. Instead of a kneejerk, populist response that feels like it’s been lifted directly out of “A Clockwork Orange”, an evidence based discussion on how to prevent alcohol fuelled violence would prove more useful.

For the past couple of years emergency service workers, led by the Police Association, have been running a campaign called “Last Drinks” – pushing for earlier closing times and blanket lockouts across all venues in a bid to reduce alcohol fuelled violence. The campaign points to the trial of such policies in Newcastle which led to a reduction of violence in venues between midnight and 3 am.

Although Thomas Kelly’s death has sparked renewed calls for lockout type policies, they would not have saved his life given he was hit relatively early at 10pm. The Newcastle trial is being held up as evidence of policies that restrict the flow of alcohol working to prevent violence.

However a closer analysis of the Bureau of Crime Statistics and Research study reveals a different story. Midnight lockouts and 3 am closing times did see a reduction in violence at the trialled venues between those hours, but there was a simultaneous increase in violence outside of those hours and outside the trialled venues. In other words, the lockouts didn’t really reduce alcohol fuelled violence but shifted it onto the streets where patrons were no longer the responsibility of the venue that sold them drinks all night.

The Bureau’s findings make sense. Prohibition has been shown time and time again to fail. We don’t exist in a vacuum when it comes to debating these kinds of policies – rates of alcohol fuelled assault in European countries are lower than in Australia despite alcohol being much more freely available at later times and to people of a younger age.

So what’s the missing link? Much has been made of Australia’s infamous reputation as a violent, boozy nation. Some claim it is a part of our culture, linking it back to our convict past. I don’t think there is anything inherent about being Australian, drinking and beating people up, but I do think there is something about our particular drinking culture – how we drink and where we drink, that increases the chances of alcohol fuelled violence taking place.

While Europe has its fair share of pubs and clubs, there is something uniquely Australian about the prevalence of “beer barns” – massive venues that offer little entertainment other than drinking and playing the pokies. Reforms to licensing laws and regulations have made it harder for venues to offer entertainment like live music and encouraged them to install poker machines. In addition to making pubs more profitable, pokies deliver billions of dollars of revenue to state governments. At the same time we’ve seen a concentration in ownership of drinking venues – Woolworths is one of the biggest owners of pubs and poker machines in the country.

It’s easy to see how, for a huge company like Woolworths, the pursuit of profit can overcome any obligation to provide alternate forms of entertainment for patrons or even to strictly enforce responsible service of alcohol. One of the most peculiar things about our alcohol licensing regime is that the people who have the responsibility to ensure patrons don’t get drunk are the same people who have a vested commercial interest in selling as many drinks as possible.

One well-known attempt to change Australia’s drinking culture has been undertaken by the City of Sydney. The council has encouraged the establishment of small bars across the city to emulate the drinking culture found in many European cities and in Melbourne. These venues have a much smaller capacity than the notorious beer barns, offer food and different forms of late night entertainment including live music and comedy.

The Lord Mayor of Sydney, Clover Moore, argues that “small bars have a chance at changing behaviour formed in the past by louder, noisier pubs with their more aggressive environment. It is much easier for a small bar manager to keep an eye on the amount of alcohol consumed by patrons in a smaller venue than in a large beer barn.”

Despite the NSW Hospitality Minister, George Souris, blaming violence in Kings Cross on the “proliferation of small bars”, only five of the 58 small bars in the City of Sydney are actually located adjacent to the Cross. Not one of the state’s most violent venues, as compiled by the Office of Liquor, Gaming and Racing, is a small bar.

Another major factor in late night violence is the accessibility, or inaccessibility, of late night transport. By the time venues start closing at 3 am, trains and buses have stopped running and taxi drivers are in the middle of their shift change over. This leaves a huge mass of intoxicated patrons on the streets of the city most weekend nights, fighting for a handful of cabs. In situations like this violence is almost inevitable.

The provision of late night transport is something beyond the control of the City of Sydney. It is the responsibly of the state government who arguably, given how much money they reap from venues through pokies revenue and licensing fees, have an obligation to ensure people can get home safely.

It’s unfortunate that it’s taken the death of a young person to get key political figures to start talking seriously about these issues again. It’s even more disappointing that the initial responses have been incredibly shallow and disconnected from the reality of the situation. The best we can hope for is reason, rationality and evidence to seep into the debate as soon as possible, so we can stop reduce the amount of people packing our emergency wards every weekend.

Previous The Lara Jeffery Show: Another Shooting in America
Next Something Happened: The Government Wants to Read Your Email