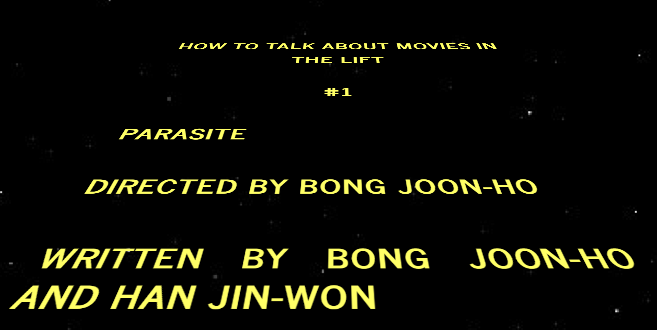 How To Talk About Movies in the Lift: ‘Parasite’

November 1, 2019 Columns, How to Talk About Movies in the Lift, Online Leave a comment

‘How to Talk About Movies’ is a fortnightly column by Michelle Wang.
In this column, Michelle Wang watches all the latest hit films and breaks down how they can ease the social pressure when you’re in need of conversation.

HOW TO TALK ABOUT MOVIES IN THE LIFT #1: Parasite

scenario one: with a slightly more senior colleague (probably) whose name you still don’t know but you have chatted amicably at a few company events

The weekend was yesterday and there’s a brief window to reminisce. It’s only Monday, you’re not sad⁠—you’re hopeful. On Sunday, you saw the movie Parasite. This movie is the latest by South Korean filmmaker Bong Joon-Ho. It was pretty whacky. It was arthouse but watchable. Like, you just got so swept up in it. Really, you can’t miss the opportunity to make some small talk about this movie.

It follows a poor but tight-knit family who dwell in a subterranean apartment, and are handed an opportunity to better their material position. This opportunity is in the form of a very well-paid tutoring job that the son, Ki-woo, is recommended for. He gets the job for the wealthy Park family and realises this could be his family’s way out of poverty, and so begins a chain of comic events as he assists each member of his family—sister, father, mother, to acquire jobs working for the Park household, too. Events start to take a twisted turn from then on… for much lies beneath the luxurious façade of the Park family’s home.

scenario two: with the super-friendly paralegal who you’ve had lunch with but you aren’t sure if you really vibe though they seem pretty cool (judging from their Instagram)

Remember that bizarre movie on netflix, Okja? Or that blockbuster, Snowpiercer? Well, the same guy is behind Parasite. Yeah, that movie which won the Palme D’Or at the 2019 Cannes Film Festival.  It’s a masterful black comedy full of unexpected twists and turns. It has also been described as a ‘home invasion thriller’. That’s an interesting way of putting it—as the family does essentially, in an unconventional manner, ‘invade’ the Park home through taking up household positions such as chauffeur (the father) and housekeeper (the mother). This invasion is conveyed in one particularly rhythmic sequence, where the family uses various forms of trickery to basically con their way into the Park family, never revealing their personal connections to each other. You were on the edge of your seat that whole sequence, it was so clever and funny and cool how the poor family so smoothly duped these super rich clueless peeps.

And you have to mention the Park family mansion. WaoOOwwwww. Flawless. Stunning. An architectural masterpiece. No shame if you watch the movie for this purely superfluous reason (though you will definitely leave the cinema affected far more profoundly). Each frame is a visual delight. The mansion’s vast and modern spaces, monochrome-grey-with-gold-accents colour scheme and full-wall glass windows overlooking manicured green lawns set a perfectly stylish and spooky scene. Things dark must lurk beneath this sleek surface.

Your world is a box dangling by cables. Your phone has run out of battery. The air tastes fake.  But you have each other. And you still saw Parasite just yesterday.

In your idleness, sitting head in hands on the lift floor, inspiration strikes…

After all, can you ever get out from under? You root for the underdogs as they climb out of their circumstances, gaining new footing through new riches. But society is cruel. We deny class exists because we don’t talk about it in that way anymore, but it’s there. It’s there when Da-Song, the weird son of the Park family remarks about the Kim family, “why do these people smell the same?” The smell of their damp subterranean dwelling clings to their skin and clothes, a symbol of their inescapable circumstances. The Park family turns their nose up away from the smell, reacting physically to the stench every time. They are literally above it all, far, far away from the lives of others with no desire to cross that distance.

Bong Joon-Ho was concerned that key themes of his film would only really resonate with a Korean audience⁠—that of social class, and family. You agree, there would be nuances and details which are such, but it has been a provocative piece worldwide.

Take the title: ‘Parasites’. Lecherous, life-sucking creatures. The Park family’s life is buoyed along by their tireless household staff. The Kim family’s opportunity to rise out of their circumstances is in the labour they can give to the Park family. You realise as the movie unravels that the families reflect each other in a distorted mirror. Both close-knit families who express their love in different ways: one who throws garden parties at a moment’s notice with hors d’oeuvres, one who joyously slurp down instant noodles for dinner with no ceremony at all. Both with wants and needs. Both, feeding off each other. Their distorted meeting of worlds simmers throughout the movie, coming to full boil in the tragic climax. A horrific and violent Pandora’s Box is opened involving Morse code, highly appropriative Indigenous American costumes, and lots of blood. You’re convinced that the Parks are the real parasites, the rich feeding off the poor⁠—a family who wears goddamn matching grey silk pajamas. But upon reflection, afterwards, sitting there on the ground, it works both ways, you realise, with a sense of nihilistic hopelessness. You just can’t get out from under.