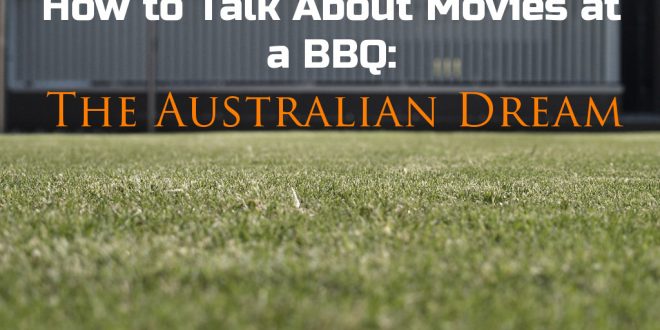 November 15, 2019 Columns, How to Talk About Movies in the Lift, Online Leave a comment

‘How to Talk About Movies’ is a fortnightly column by Michelle Wang.
In this column, Michelle Wang watches all the latest hit films and breaks down how they can ease the social pressure when you’re in need of conversation.

scenario one: cold one in hand, you’ve just finished discussing the host’s home renovation, especially the incredible flow from the inside to outside patio space, where you’re standing.

It’s been established at least four times in this one conversation (not factoring in the exact same conversations occurring simultaneously around the garden) that the renovated patio is “so good for entertaining.” It’s time for the mingling to progress. You and your acquaintances briefly look out to the yard as the conversation lulls, where fathers and sons are kicking an AFL ball around. Quintessential. Before the actual subject of the sport threatens to colonise this afternoon’s conversation, swiftly raise a sports-related conversation topic.

The Australian Dream (2019) is the new documentary centred around the AFL player, Adam Goodes. It’s not to be confused with The Final Quarter, also about Goodes, which aired on Channel Ten recently. That’s right, Goodes is the Indigenous AFL player who retired in 2015 after the incessant booing and attention. This was largely catalysed by his outraged response to the racist taunt of “you’re an ape”, made by a 13 year old girl at a match in 2013. Media attention following the event was polemic, criticising Goodes’ rage as out of control, since the fan was only 13 and made to leave the stadium. On the other hand, it lifted the issue of racism into the spotlight, and placed Goodes firmly in its glare for the remaining time of his career.

The title of the movie might also sound familiar because of Stan Grant’s 2016 viral speech that also became a Quarterly Essay piece. The Australian Dream builds upon this double foundation of the 13 year old’s taunts and Grant’s speech, excavating the diverse and conflicting voices that continue to shape Australian attitudes towards the politics of race and racial identity.

scenario two: most of the food has been served, and everyone is getting through their variously barbecued fare. You’re perched on one of the oversized and slightly uncomfortable cushions arranged on a throw rug.

The BBQ’s boho-luxe vibes are grating on you a little bit, mainly because of the extremely scratchy cushion cover you’re sitting on; but the vegetarian fare is delicious. You’re nomming your way through a halloumi burger on a lightly toasted brioche bun with homemade olive tapenade, and you’ve got your eyes on the big plate of salad coming out of the kitchen… looks like eggplant?

A balanced and studied piece of work, is how you would describe The Australian Dream, directed by Daniel Gordon and written by Stan Grant. At times, the re-enactments felt a bit overwrought, and the journalistic pursuit of balanced, truthful storytelling yielded a lot of screen time to Andrew Bolt and Eddie McGuire. The right-wing ideologue Bolt, who argued that Goodes had overreacted and victimised the 13 year old fan; and AFL manager Maguire, who clumsily tries to talk his way out of comments he made after the ‘ape’ taunts about how Adam Goodes would be a good person to promote the musical King Kong. Umm, what? Like, what the actual f**k? And people still don’t think that Adam Goodes was a victim of racism… aren’t these perspectives perfect examples of racism becoming embedded, tolerated and accepted in Australian society?

Including these perspectives alongside Goodes and Grant, as well as that of other Indigenous sportspeople like Nova Perry, show how this documentary takes an intelligent and fair-minded approach to racism in Australia. It walks a very credible line in its representation of people and events.

scenario three: by now, you’ve gathered around the fire pit. You’re feeling particularly amicable and close to everyone here by this point. After all, you’ve shared a lot tonight – at least a dozen bottles of Jacob’s Creek sparkling wine and Adelaide Hills chardonnay.

Feeling well-connected to your companions as you gaze into the ebbing flames, the time is ripe to share some of your deeper reflections. A moment to contemplate the sport at the centre of it all: AFL. You nod your head ponderously.

Sport brings expression to unspeakable wounds and scars, highlights the bleeding fissures of society’s bedrock. It is a language that more Australians can speak, inclusive of Aboriginal Australians. It is politics and theatre (synonyms, after all.) It is a universal language like music. The filmic medium conveys this poignantly, opening with a visual transition from a desert landscape to the football stadium. The connection between land and sport is spoken of in the commentary, and indeed the Indigenous ball game of marngrook has been long linked to the origins of AFL.

It remains troubling to think about the mixed reactions to Goodes after the ape incident. There’s not a question in your mind that the booing towards him afterwards was racist. From watching the documentary weave together the different events and responses from the media and public, it is objectively bizarre that such a large majority of Australians can still ask “yeah but was it actually racist?”

Its emblematic of how far we have to go. Grant hits a nerve when he says that white Australia’s tolerance runs out as soon as Indigenous people dare to express their anger. The moment Goodes makes an uproar, all eyes on him dare he do something like that again, that ape! Racism is part  of Australia’s inception – um hello, terra nullius? Claiming someone else’s land, their voice, their heritage – that is Australia’s history. And Aboriginal people can’t be the slightest bit upset about that? White Australia will boo one of their most beloved sportspeople for years, just for a temporary flash of anger, because he asserted his identity with some spirit. The Australian Dream reminds us that racism is a conversation we still need to have, and regularly. With poise and hope, it depicts this unfading scar on our nation’s history and identity.

Share
Previous All That Glitters is Not Gold
Next Gold Sonnets 1: Yellow Gold