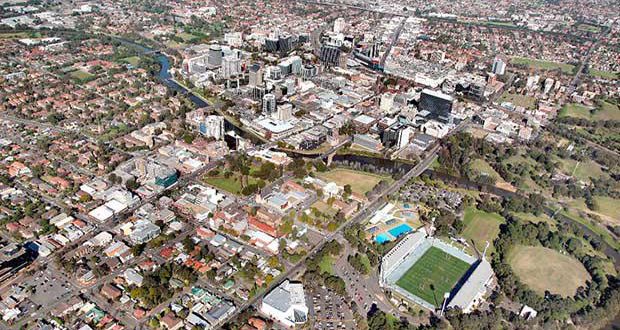 How the Red Rooster Line is Moving

There used to be a tyre factory down the road, workers’ tenements next door and a coal-fired power station across the water. Before that the land belonged to the Wangal people. Now it’s shopping centres and apartments. Fair enough really – life keeps moving.

These changes of development and gentrification are typically thought of as happening in waves, especially in Sydney with its geographical (and political) constraints. Following the Second World War in the inner-ring suburbs, the first waves of change have tended to be groups who may have less to lose, like artists, LGBTQI+ people, working-class migrants and even uni students. They might be looking for cheaper housing or a shorter commute compared to established, safer suburbs. The second wave tends to consist of DINKs (childless couples) with the cash and mobility to buy their way into an area they see as desirable. For example, the suburb may have a bunch of trendy artists in it! Following them may be trendy families who tend to make noise complaints about the local pub they moved next door to. Just look at what’s changed in Balmain since the Second World War[1].

It’s why the “Keep Newtown Weird” or the “WestCONnex will Kill King St” campaigns are a bit laughable. King St has always been a bit of a parking lot and property prices in Newtown have never been higher. The suburb has never been richer, older or with fewer students and people working in creative industries. Compare the demographics and prices in the 2016 census to previous years. The second wave of gentrification took place a while ago in Newtown – it’s only the holdouts remaining. Newtown is getting less weird every year.

The good news is that sort of change doesn’t happen quickly. The better news is if you own property, it’s likely to appreciate in value. The bad news is if you’re a renter, you’re probably out of luck. The “Have” and “Have Not” suburbs of Sydney are typically thought to be divided by the Latte Line (also called the Red Rooster Line). This line indicates a significant division of economic opportunity, house prices, commute times, health outcomes and a lot more. Honi Soit mapped it out in great detail in September 2017.

Honi asked what stops restaurants like Outback Steakhouse or Hog’s Breath from expanding north-eastward. There’s no reason why a restaurant like that would expand in that direction, and there are two key reasons why they wouldn’t. It’s largely down to patronage and overheads – the former is less likely to be easily gained in a higher-income suburb because there’s more retail competition due to said suburb having greater disposable incomes. The latter is a reflection of higher land prices in the north-eastern suburbs which drives up rents and other costs. Things get more difficult the further into the northeast side of the line you go (not to say running a business of any size is easy anywhere, just that things are more competitive and expensive further to the right of the latte line).

Where can the line be expected to move in the future? The historic trend has shown the Latte Line is gradually moving southwest rather than northeast and the lines Honi mapped out are most clearly divided throughout the Canterbury-Bankstown, St George and Inner West Council regions. A better question is what moves the line.

Government announcements (let alone policies) can influence property values and the opportunities available in a suburb. To see it in action, compare the sale prices of the properties listed before and after the completion of the Northwest Metro[2]. Much like other forms of investment, property speculation is often based on announcements and “getting in first” (it doesn’t really matter whether the infrastructure actually physically exists)[3]. Other government actions like selling off public housing, improving public transport (like trams)[4] or changes to zoning laws (such as the recent announcement of a new cultural precinct in Alexandria) can also dramatically improve property values. Stamp duty makes up around 10% of the state government’s revenue[5], so the government has an incentive to keep property prices high and the velocity of property sales high.

An example of the opposite is the government policy of “redlining” in the US and Canada, where commercial zoning, government services and often financial services are systematically denied to a given area, often on the basis of race[6]. Property prices increasing may appeal to property investors but that may not be ideal for renters or long-term residents.

Beyond government policy or property prices, economic opportunities usually precede or at least indicate gentrification. My personal metric for the vanguard of the Red Rooster Line is “BBC” (small Bars, Bubble tea, and Candle and gift shops). With the exception of places like Uncle Kurt’s in Parramatta, small bars basically end at Dulwich Hill. I’d say that’s where the trendy part of the Inner West ends. However, what extends past the small bars is bubble tea. A clear example of this is the 45° angle formed by Gongcha stores in the aforementioned council areas. Small bars and bubble tea shops indicate greater disposable income – people struggling to get by don’t spend their money on boutique beers, candles or gifts[7], and a fair chunk of these outlets haven’t existed for longer than a decade or two. The movement of the Latte Line may be slow but it is inexorable.

Jordan Daly is thinking about buying a flat in Canterbury

[1] Check out Paul Keating’s comments on “the basket-weavers of Balmain”, or the declining crime rate and rapidly increasing house prices there. “Balmain: The Sydney suburb gone from bikies and brawls to strollers and serenity”, Domain, 19 October 2017, https://www.domain.com.au/news/balmain-the-sydney-suburb-gone-from-bikies-and-brawls-to-strollers-and-serenity-20171019-gz3re0/.

[2] CoreLogic graciously mapped out the differences in house and apartment prices between 2014 and 2019. The difference between Metro-linked suburbs and those lacking Metro services is clear. “Mapping the Market”, last updated September 2019, https://www.corelogic.com.au/mapping-market.

[3] Microburbs tracks a bunch of demographics and provides extremely granular detail about land prices and the liveability of suburbs. Compare pre-2012 land prices to post-2013 land prices in Metro-linked suburbs for another example of the impact of the announcement effect. “Detailed Suburb Report for Sydney”, https://www.microburbs.com.au/NSW/Sydney/.

[4] A prime example of this is the trend in Millers Point and Surry Hills, although both of these suburbs were expensive before the public housing was sold off and the light rail was built. Compare the price trends on these suburbs to the NSW median on Microburbs.

[6] Kevin M Kruse, White Flight: Atlanta and the Making of Modern Conservatism (Princeton University Press, 2007). This book speaks extensively on redlining. The front cover has WHITE FLIGHT and a Confederate flag on the front, and on an unrelated note, I have never received more dirty looks than when I read it at Westmead Hospital.

[7] As an example, the furthest southwest you can find a ‘Mr and Mrs Jones’ store is in Rosebery.

Share
Previous Spotlight On: Amelia Loughland
Next True Love on the Bankstown Line