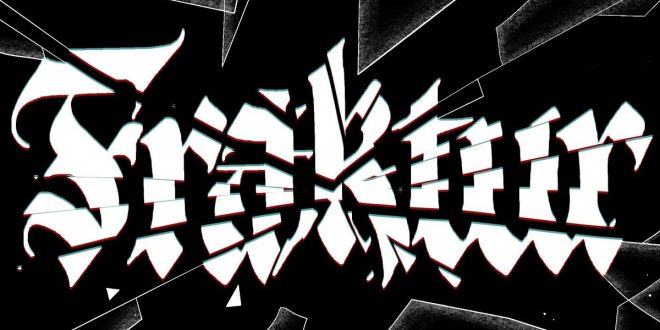 An exploration of how something as innocent as a font can be warped into a Neo-nazi dog-whistle.

Tradition has always been politicised – religion, ideology and imagery have been intertwined with political ideals of returning to the ‘good old days’ and this often creates an ironic misinterpretation of history and of the importance of bygone ideas. This is clear through the ongoing politicization of the typeface Fraktur.

Fraktur is a very decorative and visual font that you would have seen before – it is often used in the logos of newspapers and metal bands in the modern age, however its contemporary use by neo-Nazi and white supremacist groups has created immense division. This particular font has a complicated history, and questions continue to arise around the morality of its use.

Fraktur has a long history in Europe – it was created for its usability. Before print was mass produced by the printing press, all printed material was scribed by hand (often by monks), and the curved Roman typeface we are familiar with today was simply more difficult to write. Thus Blackletter, the font family Fraktur belongs to, was created to make scribing easier. For centuries, these angular letters were simply what words looked like. While today, our curved Roman letters are the most legible, and thus not noteworthy in any capacity, Blackletter font was the default for the centuries before Roman font established its monopoly over the printed word.

Despite Fraktur being widespread across Europe, as Roman influence spread over Europe and the religious connotation of the Roman type began to arise. Thus, Fraktur became synonymous with German culture and tradition because German texts were typed almost exclusively in Fraktur.  At this time, Germany was merely a collection of states united to some degree by culture. During much of the early history of the nation, Germany relied not on its identity as a unified nation, but rather, its distinction from the Roman nations. It looked to create a collectivised image that set  Germany apart from the rest of Europe. This would be heavily leant upon by the National Socialists during their time in power. Ben Hursh noted that ‘typography can silently influence: it can signify dangerous ideas, normalise dictatorships and sever broken nations.’ It is this power and influence, which is so often underestimated, that keeps Fraktur associated with Nazism, and is why the font continues to hold worrisome power today.

Nazi propaganda often relied on traditional, medieval and mythological connotations – their strength seemingly coming from their ties to old Germany. For example, Adolf Hitler’s autobiography cover used a handwritten Fraktur. However, the Nazi’s ideology involved becoming increasingly modern – they wanted to incorporate the historic strength of Germany with modern technologies to make their ideal Europe, which some have mistakenly compared to the modern-day European Union. The disjunction between the idealised vision for the future they envisioned, and reality continued, and rumours began circulating that Hitler himself hated the traditional old-school style of Fraktur.

In 1941, the Nazi’s released a memo banning all Jewish fonts. This included Fraktur, for the Nazi leaders had come to the belief that a Jewish designer was responsible for the font. Ironically, the memo’s letterhead used the exact font it was banning. Despite the irony, Fraktur was removed from circulation and less than 40 books were published using the font in the following year.

After 1945, when the Nazis were defeated by the Allies, Fraktur continued to be treated with suspicion as it was still associated with Nazism.  This association was of course undesirable almost everywhere in the world following their defeat and the widespread understanding of the extent of their crimes. Despite this, white supremacist and neo-Nazi groups began to use the font (which as a reminder was banned by the Nazis and disliked by Hitler himself). Today, as we watch as these groups gain momentum, we are seeing increased use of the typeface, which begs the question: is it ok to use Fraktur today?

We understand its use by the Nazis – it was their official propaganda font until they banned it, and it is therefore associated heavily with hateful messages. However, the typeface had a history before Nazism – for centuries it was a legible and efficient font used for all kinds of texts. Today it is used prominently by well-known magazines, their names and logos incorporating the traditional font. It is used also in black metal album art. Most notably, it is seen today in tattoos associated with gangs, and white supremacist and nationalist groups. The two images below highlight the negative connotations of the typeface in modern day. The image of a sign on a bus, which could be a relatively innocent image, the text translating to ‘this bus is driven by a German driver.  However, it has nationalist and racist undertones because of the typeface used.

The ethics of this font, which for centuries was the default typeface for much of Europe, has had a crisis of association – in many circumstances it is no longer an image of tradition and of strength, but of intolerance and division.