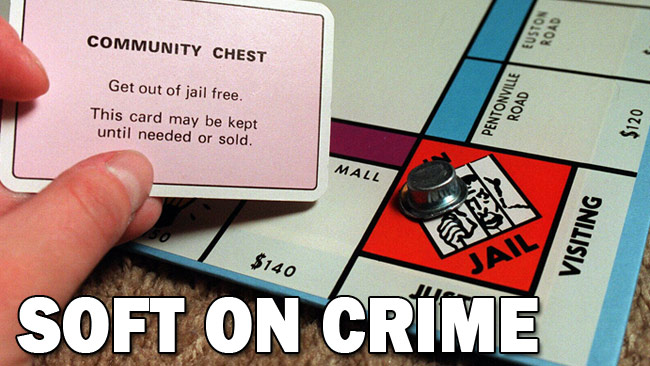 (Note to journalists: This is a template; make minor adjustments according to particular circumstances; use especially in election years.)

The government’s soft stance on crime has led to increased rates of violence in the community, a person has said. Concerns have been expressed that a staggering 100 per cent of criminals are released from incarceration after their sentence has been served, and that some accused criminals are found “not guilty” and aren’t sent to prison at all.

“It sends the wrong message to people in the community,” said Leanne, a mother. In order to corroborate this view, the Telegraph asked invasive questions of grieving families in unsolicited door stops, and found that they were upset.

In spite of a Telegraph online poll finding that 100 per cent of people support a decrease in crime rates, the Attorney-General is reluctant to impose tougher penalties. (Note: ensure to say “Labor Attorney-General” if they are in power.)

One of Sydney’s leading talkback radio hosts expressed his concern in an exclusive interview with the Telegraph. “These people need to be whipped in the street,” he said. “They need to have their kneecaps smashed in and their fingers chopped off. This government needs to send a strong signal that violence is unacceptable in the Australian community.”

According to statistics especially misrepresented for this story, rates of certain violent crimes have increased by up to 10 per cent across New South Wales, and it seems that asylum seekers and other marginalised members of the community are to blame.

“They come to this country from places with a history of violence and they feel they are free to replicate that kind of behaviour in Australia,” said John, a cretin.

Concerned about the rise of violence across the state, a self-confessed expert said that the clear way to prevent crime in the community was to impose tougher sentences. “It’s common sense,” he said. “If the government wants to crack down on crime, then all offenders, including minor offenders, need to be sent into incarceration where they will be confined with other criminals in a brutalising environment before being released into the community with scant support mechanisms and little prospect of employment.”

The Shadow Attorney-General agreed with reporters that the government was not doing enough to curb growing crime rates and outlined policies being mooted in the shadow cabinet, including plans to ban motorcycle clubs, public gatherings, free speech, freedom of association and overturning the presumption of innocence. “It’s clear this is a weak government that has lost control,” he said. “People live in fear of criminality and that’s simply not good enough.”

Representatives from the government did not respond to our questions, but it is likely that in response to this story and others like it, they will panic and overreact with draconian measures.

Previous Editorial #8: Kick This Knob Out
Next On Repealing the Carbon Tax