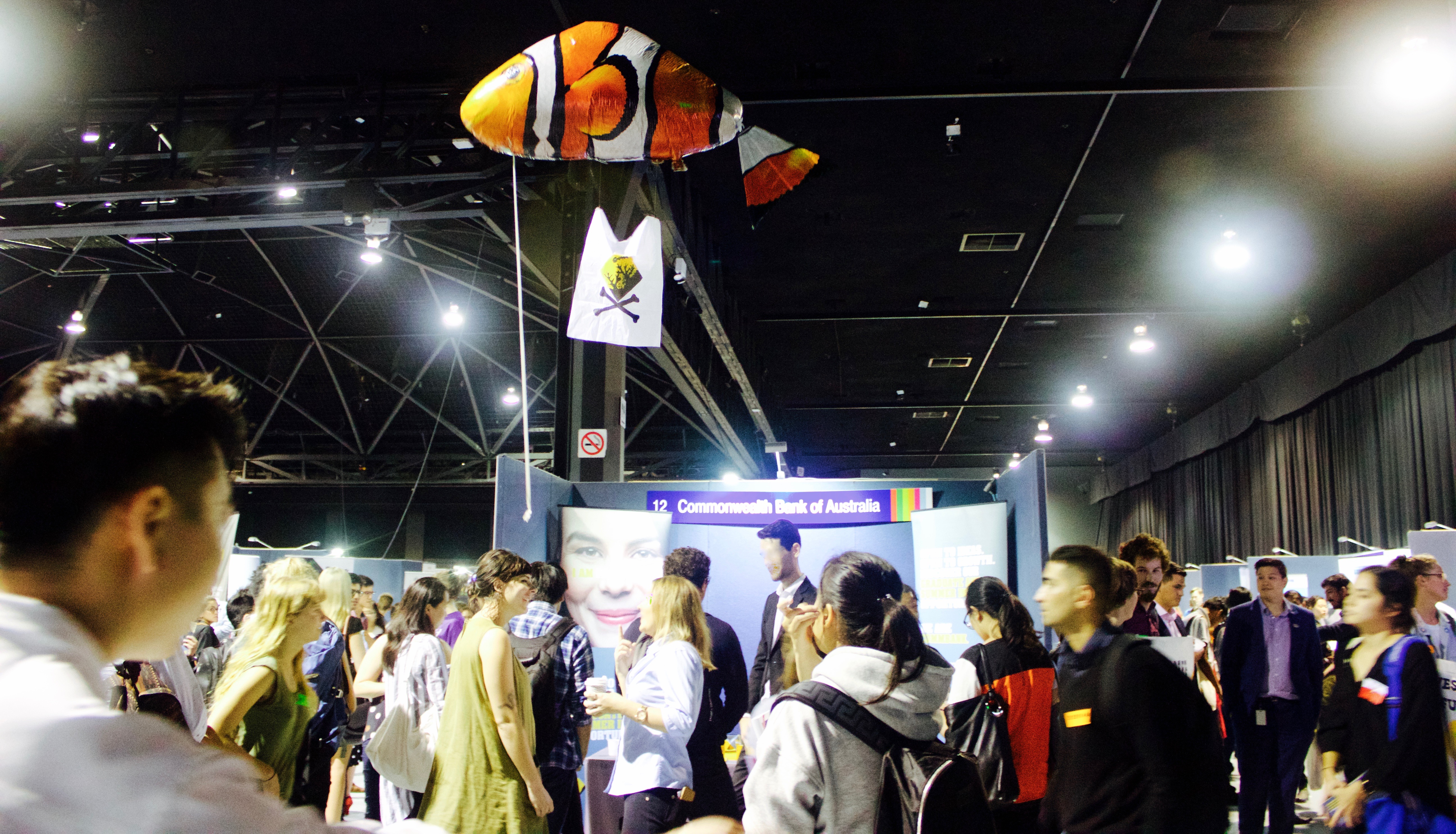 Picture this: you’re at yesterday’s UNSW Careers Fair, free stuff in tow, heading back to that stall with the cute employer you may or may not have been slightly flirting with, when you see… could it be? A giant, inflatable Nemo drifting above the stalls? Is that the Commonwealth Bank logo attached? What’s going on here?

Let’s rewind for a sec.

This week, we’ve seen a flood of news about a second, unprecedented coral-bleaching event at the Great Barrier Reef. Warming waters are hitting the reef hard, and it’s uncertain whether most of the coral will be able to survive. What’s more, we know what we need to do, and scientists have been clear in telling us: stopping global warming is the only way to save the Great Barrier Reef.

That doesn’t sound too radical. After all, in late 2015, world leaders formed a consensus regarding the Paris Agreement, aiming to keep global warming below 1.5 degrees to attempt to avoid catastrophic impacts for people around the world. But what does this mean on a policy level? Doing the math makes it pretty clear that we need to slam the brakes on fossil fuel projects (the biggest contributors to climate change) fast, and start transitioning to renewable and more democratic forms of energy, stat.

Enter Commonwealth Bank. Since the Paris Agreement was signed in December 2015, they have responded by … well, acting like nothing has changed. Of all Australian banks, CommBank has funded the most to fossil fuels post-Paris agreement: in just over a year, it’s loaned a whopping $3.9 billion to this industry.

As if that is not insulting enough, CommBank has also remained ambivalent as to whether it will finance the Adani-Carmichael coal mine. In case those words don’t mean much to you, we are referring to the biggest proposed coal mine in Australia – in fact, one of the largest in the world – and a project that most certainly cannot go ahead if we are to adhere to the Paris Agreement and stay within 1.5, or even 2, degrees of climate warming. Funding that = pretty damn irresponsible.

So, as young people with a pretty huge stake in what happens here, what are our options? We could do nothing and complain about the state of the world. We could make some dank memes about it. Or, we could call on CommBank to step up, take some moral leadership, and start prioritising our future over the dirty, fast money of fossil fuels.

For a bunch of us in the UNSW Environment Collective, that last option sounded like the least depressing. So we cooked up a plan, and at the convenient location of the UNSW Careers Fair on Wednesday, we took action.

Twelve of us made our way to the Hordern Pavilion, and were impressed to see that the CommBank stall was right there, in-your-face, just inside the entrance. In quick succession, we rolled out our plan. Helium-filled Nemo balloon? Airborne. Homemade banner that reads “Destroy the reef/CommBank can”? Unravelled. Flyers explaining what we’re doing? Distributed. Facebook live stream? Recording.

We handed out flyers to students walking by in search of prospective employers, encouraging them to join the tens of thousands of Commbank customers who are a) terrified of a climate change future and b) wishing their bank would immediately commit to stop financing or advising new coal projects so that one day they might have the chance of experiencing the grandeur of the Great Barrier Reef (unbleached, and with real live clownfish, thanks very much).

Eventually we were asked to leave – no surprises there – and we complied. No one super pissed off, no one hurt, but our message rang loud and clear. Our video has already reached 20,000 people online in less than 24 hours, and with a bit of luck, the CommBank stall staff will be talking to their bosses today about what went down.

This is slow, but vitally important work: eroding the bank’s social license to continue lending billions to fossil fuels.

But hey, nothing is going to change if it’s only 12 university students taking part. Which is why we’re glad that across the whole world, from March 12-31, people will be mobilising just like this, as part of a worldwide push to #BreakFree from fossil fuels. What’s more, you can join them, and take part in an action yourself – because a cooked planet threatens all of our futures, and we all have a responsibility to help stop it.

Serious action on coal by such a big Australian bank will certainly help to undermine coal investments globally and isolate those companies that are driving climate change, wrecking the reef and putting our collective futures at risk.

And where better to execute an action that fights for our collective futures than at a careers expo? Remember: there won’t be grad jobs on a dead planet. 😉

Previous An Open Letter to Merlin Crossley and the UNSW Chancellery
Next In Conversation with Miles Merrill: Chicagoan, Performing Writer and Creative Director of Word Travels