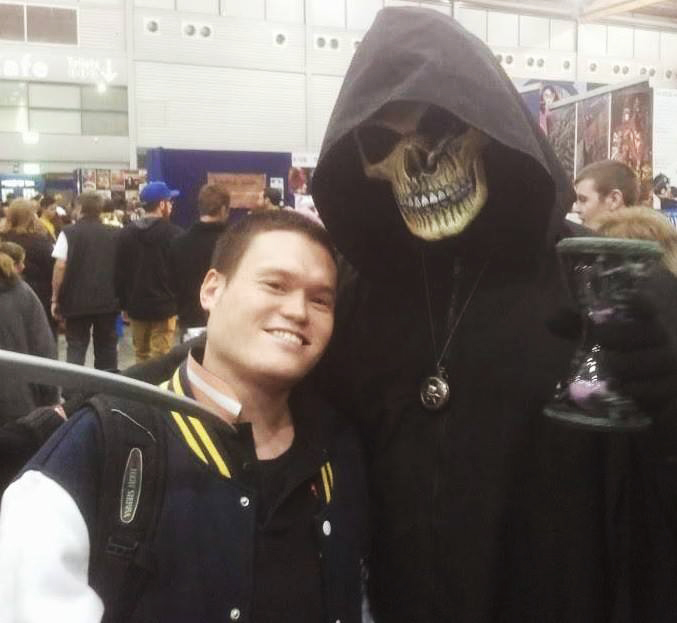 Halloween: Thru the lens of a film major

It is a Saturday night in Marrickville, very close to Sunday morning. A party is going on, but without the presence of intimidating security guards, a cover charge and budget-burning $10+ drinks. Rather, I have found an intimate venue (in fact a three-level share house, partially decayed). The atmosphere is friendly yet lively, all in the cause of celebrating a traditional pagan festival – Halloween.

Such a time of year is associated with broomsticks, witches, trolls, and Jack O’ Lanterns – or just anything supernatural, fantasy themed? In certain parts of the world (United States, Germany), such a religion is passionately observed. But down under (here in Australia), we must scurry to the hidden corners of social media to gain any chance of finding a party, as I so experienced at half-an-hour to midnight (in the depths of an inner city internet café). Finding one doesn’t disappoint. As a generation of young men and women (experiencing our initial years as developing adults), we were once scared of the boogeyman, ghosts and goblins.

Okay, with all honesty, we may have laughed at these representations, because of all the cheesy artwork displayed on the canvas of ghoulish rides found at the Easter Show, or at outings to Sydney’s Luna Park. Now the real terror comes from the facet of reality. As I’m welcomed into the party by a guy painted with the face of a demon (a reddish version of Heath Ledger’s Joker type), I happen to catch up with a mate of mine, and he ushers me into the host’s bedroom (where other ghoulish creatures are gathered around a small table already clustered with beer bottles and an assortment of Allen’s lollies).

A few scary masks are suspended from the wall, as well as Halloween confetti and rippled posters of dead musicians (think Elvis Presley, Amy Winehouse and Kurt Cobain). Perhaps their spirits are watching over us and are bowing their heads in shame as they witness our baby-faced generation follow in their example. Our conversations are spontaneous and somehow all loosely related to our shared angst as newly emerged, independent individuals. Skin deep, we seem carefree, but deep inside, we are still, and just as insecure as much as we were in our childhood days (still struggling with identity and place in the world).

Moving around the house, there are twisted stairwells leading up to a kitchen and living room, almost completely absent of furniture apart from a couple of sofas and a CRT television rescued from the street. The tenants happen to be tertiary students working part-time just to meet the next month’s rent. But I suppose it is all worth it in the end so that this party can happen, giving us the chance to let our hair down for at least once this week. The scene on the courtyard (or beer garden) is a fine example of this: Bettie Boop and Daisy Duke lookalikes feed on sticks of marshmallows over a bonfire, but the Stay Puft giant from Ghostbusters has failed to make an appearance. Perhaps 9/11 scared him off?

See… Even incarnations of Goza have their limitations. And I’m certain it would have been given a headache overhearing our ranting on about tribulations at work, issues with our significant other (or lack of), and shared tips on how to effectively avoid family commitments during the upcoming holiday season. My, my, aren’t we a scheming bunch this Halloween? As the night rolls on, we happen to attract some unwanted guests (gatecrashers), but luckily we have our very own Frankenstein and his pal Michael Myers to send them packing.

And now time has flown and it’s now on the cusp of dawn. Nothing to do now but lay down to sleep and avoid the rising sun – just like vampires on parole. Thankfully I have located an empty couch to rest on…

Wake up again, and it’s late on a Sunday morning. What an insane feeling. The party atmosphere has long since vacated and now the house is near empty, with the exception of one of the tenants who has slept in as well. I thank him for helping me outside, regardless of the fact that he’s topless (thank God that he’s exposing himself to an empty street outside).

The previous night is now but a faded memory, saving face for a few photo snaps. God, I love Halloween!!

Share
Previous Review: Arj Barker at the Roundhouse
Next Praise be to all men of colour