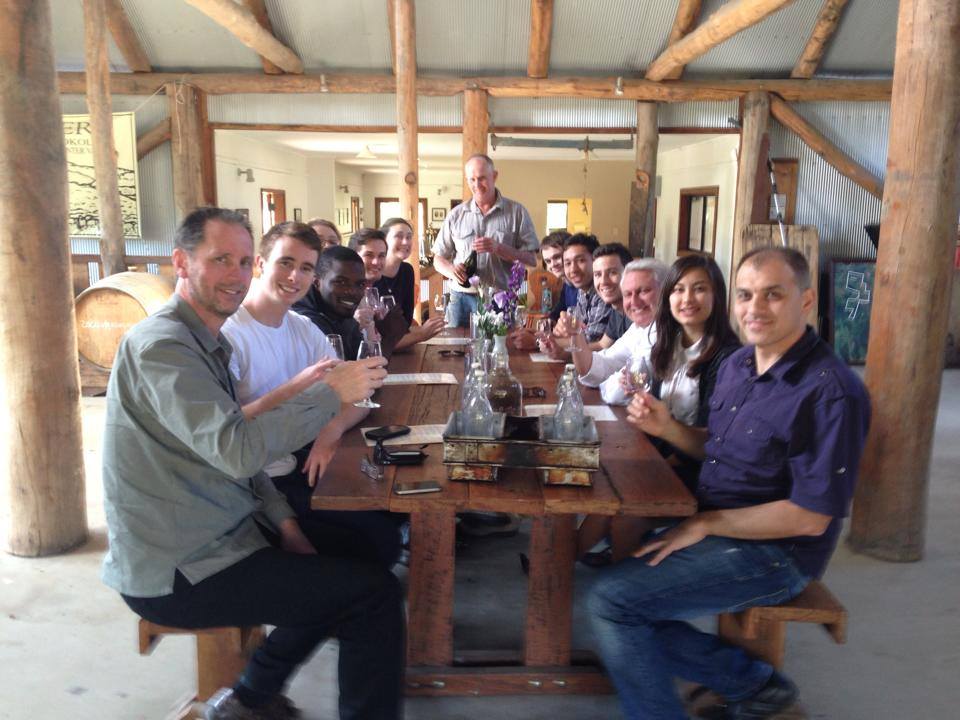 Hacks, Lies and the Third Estate: Your post-election wrap up

he people you voted in…

Out of the blur of Facebook posts, posters, lecturer bashing, and announcements in your dining hall, (9% of) the people voted in Basser resident and Whitlam Club Treasurer Mitchell Wilson (Arts/Law II), Yellow Shirt and MUNer Melissa-Ann Gillies (Arts/Law V), and new international postgraduate Obaro Edafe (M. Petroleum Engineering) to the Arc@UNSW Limited Board. In June, they will begin their two year terms, and will be responsible for the strategic direction of Arc and the student life of the 20 000-strong Arc membership.

The last minute rush to get the rules in…

It seems we can’t have an organisation with student Directors without the typical student behaviour of getting things done at the last possible minute. On the Wednesday night before the elections, candidates were given a set of rules for the elections. One ballot, one page, and the constitutional quota for post graduates would ensure a postgraduate director. Then, on the Friday night – less than three days before voting opened, candidates were given a new set of rules. Two ballots, two pages – one of post graduates, one for ordinary directors. This produced a few odd outcomes – firstly, only the post graduates appeared on the first page, which confused some voters. Secondly, you could vote for Obaro Edafe, Andrew Roberts, and Nina Teroganova in multiple polls, which confused more voters. It also affected the way some candidates planned to run their campaigns.

The deals and deceits that are doing our heads in…

There were some great preference deals this year. The personal favourite was Athos Wang, Aporthos Mao, and Aramis Wang’s ‘The Three Musketeers’ ticket. Changing your names for a ticket? Now that’s unity. Then there was the polished Melissa-Ann Gillies and Andrew Roberts ticket; very much a team pushing the same policies together from day one. And finally, there was Mitchell Wilson’s agreements. It is clear from the original run of posters and the screenshots of the Facebook page that Mr Wilson was only preferencing Anna Fowler, and that it was much later that Facebook posts started including a “Vote [1] Obaro Edafe” – likely due to the late change to the two ballot system. Still, Mr Wilson told Tharunka “I was always going to preference Obaro and Anna”.

For those who missed them, Mr Edafe and Mr Wilson’s policies were about as related as hamsters are to salad forks.

Then, before the counts were even in, Mr Wilson systematically removed every mention of the preference deal from Facebook as if it had never existed. When asked to comment on this specific act, Mr Wilson said that he “started to remove all election material after the campaign”. Perhaps it is just an odd coincidence then that the most pressing task was wiping all references to Mr Edafe, and that all other content could remain til morning. The clearest indication of the intention of this manoeuver though was Mr Edafe’s comment when asked about it post elections – “Question is, how did you know we preferenced each other?”

Guys, you’re allowed to have preference deals. Save everyone the conspiracy theorising and just own them.

While some of his rivals have criticised Mr Edafe’s lack of experience and his less than transparent deal with Mr Wilson, the fact is that he earned his place, and has a particularly unique viewpoint; having studied here for only a little over two months, he has very little previous engagement with Arc, and brings with him a much needed international student perspective. While Mr Edafe has some of his facts wrong – UNSW is not 60% international students, and Arc is not a Union – there is certainly something to be said for his belief that “being part of the Board is paramount to [international students] being recognised as the part of the student body itself”.

Look over there! Is that a segue? While campaigning on populist platitudes has always been a favourite strategy of politicians anywhere, the continued presence of the ‘Bring back Oktoberfest’ lines on Mr Wilson and Dorothy Rapasardi’s pages was confusing. In case you missed it in the last issue, Tharunka confirmed that Arc is bringing back Oktoberfest for 2014. In case they missed it, the Returning Officer informed candidates that it was indeed back and they probably didn’t need to run on it. When asked about this, Mr Wilson said, “As soon as I was informed, I removed this element of my campaign. Regardless, I am very keen to ensure that Oktoberfest reaches its full potential and will push for this as Director”. While it is accurate that no new materials pushed the Oktoberfest line, it remained within the ‘notes’ of his campaign page, and was on his Facebook banner until after the elections. Ms Rapasardi’s page identical in this respect. If you were a voter on Mr Wilson or Ms Rapasardi’s pages, you would believe that they were going to bring back Oktoberfest. And if you are a candidate and you know better, that is deceptive.

The election that maybe you didn’t get to vote in…

Over the course of the election, it became apparent that many students who believed they were eligible did not receive their voting links. Armella Zadooria said, “Many of my friends did not receive their voting link. They also thought that the University [Council] elections was where they were supposed to vote. Similarly, Josh Beale said, “Many people I spoke to expressed frustration with the fact that they did not receive a voting link or had to go to extra lengths to receive one – this was frustration from people who had not yet registered for OrgSync or who assured me they had signed up for Arc at the start of the year”. Yes, plenty of people forget to check their junk mail or forget where there Arc emails are sent, but this year it is clear that there was a technological issue with the switch to OrgSync which has disenfranchised voters.  Given that the Board induction occurs on May 21st, we are unlikely to have a #WAvotes situation, but it is expected that Board will be reviewing exactly what happened and just how many people missed out.

The election that you don’t get to vote in…

Much has been made of current Board Director Tom Morrison’s involvement in the 2014 candidates’ campaigns, and its effect on the election of the Arc Board Chair. While Mr Morrison did not wish to respond to allegations from protected sources, it is no secret to anyone that he had a key role in Mitch Wilson’s campaign. Josh Beale also reported that he was contacted multiple times on May 10th and 11th by Mr Morrison, who told him that “talking to me [Tom] will probably improve your election chances”. Mr Morrison told Tharunka “that’s a matter for me and Josh.”

A 2014 candidate who wished to remain anonymous also said that “I spoke to Tom before electionsI believe he passed my number on to Dorothy [Rapasardi, Labor Right ally of Mr Morrison]. She contacted me on the Wednesday and asked to do a preference deal. I declined because I thought it was too late”. The candidate then alleged that Ms Rapasardi said, ‘Obara is standing for the elections is as well. For where I look at it, Andy is already in strong position with Melissa, and Mitch has already given his postgraduate preference to Obaro, and I’m thinking of giving it to Obaro as well’*. A source inside the Labor Right told Tharunka, “Dorothy and Tom basically just threw darts at a wall to pick a candidate they could get up. That’s just politics though”. Mr Morrison did not wish to comment on this allegation either.

Everyone played by the rules – the rules just suck…

So what happens if is known that Mr Wilson, Mr Edafe, or Ms Rapasardi’s campaigns were directly influenced by someone who is expected to run for Arc Board Chair, and that the same person tried to have an influence over other candidates’ campaigns?

What happens if Mr Wilson was less than truthful to the newspaper that is supposed to be keeping Arc – the organisation he has just been elected to help lead – accountable?

Mr Morrison is friends with Ms Rapasardi, and Mr Wilson, and (if Facebook prior to the close of elections is to be believed), Mr Edafe. He was well within his rights to assist them in any way he saw fit (even if it was as tasteful as a forgotten gym sock). If he is elected as Chair at the first Board meeting after May 31st with the votes of Mr Wilson and Mr Edafe, then so be it. There is nothing in the Arc regulations which prevents this kind of cronyism from affecting the election of Directors or the Chair.

And candidates can campaign actively or otherwise on policies that Arc has already achieved, or have nothing to do with the Board at all, and there is nothing stopping them. And you can make preference deals at any stage in the election process, and then can scrub it all from Facebook, and try without too much difficulty to gaslight the people you’re meant to be representing.

The reality is, this kind of backroom bullshit is the way politics is traditionally done in Australia. It’s an ugly, dirty business where success as a candidate does not necessarily reflect fitness for a role. And student politics is just the practice pitch for the big leagues – the Chris ‘I can’t recall’ Hartchers and Tony ‘No cuts to education’ Abbotts of the world have to learn this shit somewhere. It is founded on a ‘the ends justifies the means’ mentality that says ‘if I don’t get into power, the bad guys will’. Only when you do things like this, it makes it very hard to convince people that you’re one of the good guys.

Congratulations to all the candidates. Whether you got down in the mud to get up, or your campaign was so clean it was hermetically sealed, the fact that you signed up for the chance to serve your fellow students for two years means you are probably a better person than me.

And that’s a wrap.

*Ms Rapasardi was contacted but did not offer comment