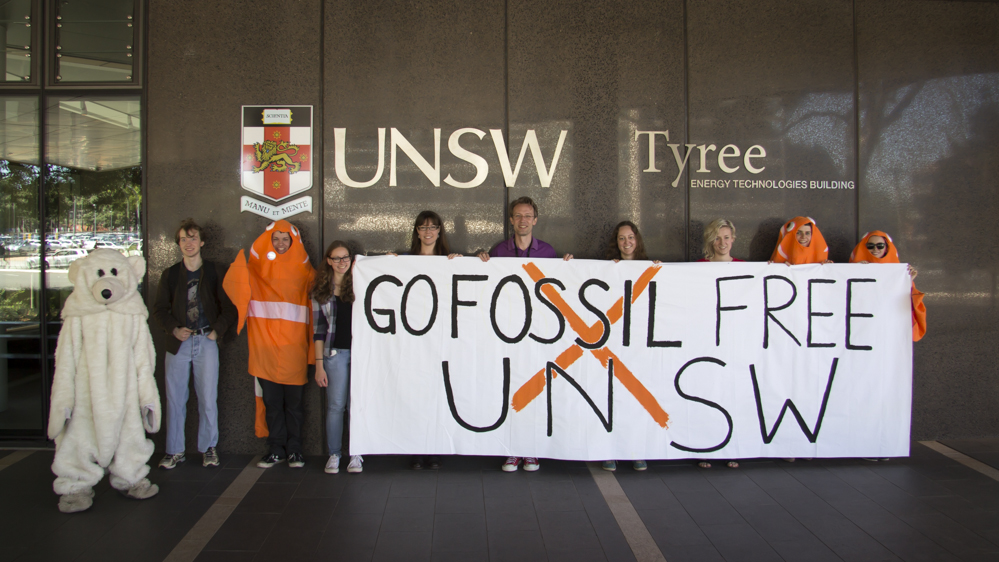 It was that classic awkward situation that you always worry will happen when you send an email about someone else: You accidentally send that email to the very person it is about. Only this time, the email, from the CFO of Monash University, cast the Group of Eight Universities, including UNSW, into controversy.

The email was regarding a survey from the Asset Owners Disclosure Project (AODP) that was sent to 300 of the world’s biggest universities. The survey aimed to assess where their endowments are being invested and their engagement with high carbon exposed companies and fossil fuel companies. Upon seeing the survey, Monash’s CFO David Pitt sent this email to what he thought was just the Vice-Chancellor of Monash:

“My recommendation is we let this through to the keeper… To pursue this would involve or imply ‘unbundling’ of our investment activities…and we might not score well anyway. Better not to respond so this group would have to rely on public information and we would simply be in a position to say that we are unaware of their scoring and did not participate.”

The email also outlined that the Group of Eight had recently discussed the topic and decided not to allow others to judge their efforts on investment.

Unfortunately for Pitt, the email was also accidentally sent to the AODP.

After this incident appeared on Lateline, in the Sydney Morning Herald and The Australian, it became apparent that the Group of Eight is making an effort to keep their investments in fossil fuel companies under wraps.

UNSW does not directly invest in fossil fuel companies, but it does invest through externally managed funds, according to the SRC’s Environment Officer, Nicholas Gueriff. Gueriff believes that although they do not directly invest, the financial officers at UNSW still have a role in deciding many aspects of the investments.

“Just because their funds are externally managed, UNSW still decides which managed funds we invest in, and still receives reports from those managed funds, and still has an influence on where that money goes once it’s in that managed fund,” he says.

Joshua Sheppard, the Global Universities Index Project Manager of the AODP, sees UNSW’s explanation that they do not have direct investments in any fossil fuel companies as a way to sidestep scrutiny.

“UNSW has also stated that they have no control over their fund manager’s decisions and does not have the information to complete the survey. This is a disappointing attempt to evade scrutiny on UNSW’s investment activities,” he says.

Mr Gueriff believes that it’s important for institutional investors to be aware of the risks of investing in fossil fuel companies.

“They have to at least monitor what’s going on, and how it will affect UNSW. In the past, universities like UNSW…lost quite significant amounts of money in the global financial crisis, which they were unprepared for.  It’s our suggestion that this is on a similar scale, so if we’re unprepared for this, it’s quite likely that institutions like UNSW are going to lose a lot more money, which is not good for students, staff, or the broader people who rely on UNSW’s research and education.”

Mr Sheppard agrees with this view and says that the problem is not just with fossil fuel companies, but with any high carbon exposed assets.

In addition to the lack of disclosure of investments, it has also become apparent that UNSW will not be divesting from fossil fuel companies.

“I have met with Fred Hilmer on multiple occasions to discuss why the university should divest from fossil fuels, including the fact that it has been proven to deliver the same return, aligns with UNSW’s desire to be the leading university in renewable energy engineering, and is ethical,” SRC President Joel Wilson says.

“He was both sceptical of the benefits of divesting and argued that UNSW did not manage its own funds and that the amount of funds that UNSW invested was too small to make any real impact. However, he did promise to look into whether it was financially viable.

“When asked to give an update in our last meeting in March, Hilmer ruled out the possibility of divesting from fossil fuels…as he felt it was merely tokenism. He argued that if UNSW was going to make a serious stand against fossil fuels, it would not foster the learning and development of students who were inevitably going into the fossil fuel industry. This was obviously a huge blow to the fossil fuel divestment movement on campus,” Wilson says.

Many see both the disclosure of such investments, and the divestment of fossil fuel companies, as a key issue for universities to take a stand on.

“UNSW has the capacity to be a leader on the world-stage in investor disclosure on climate change risks. The university should engage with their stakeholders in good faith, disclose their current investment position and move towards a more sustainable investment path,” Mr Sheppard says.

According to the Sydney Morning Herald, Monash University has not yet made a decision on whether to consider the project’s study. According to Mr Gueriff, UNSW too remains uncommunicative on the topic.