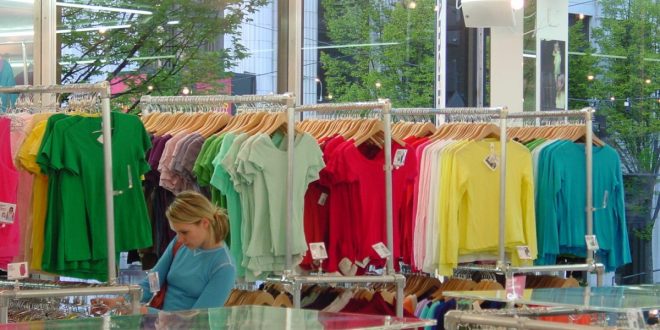 Green Thoughts #1: Cleaning Out Our Closets

There are few things I love more than a closet cleanout video – the voyeurism of stepping into somebody’s walk in wardrobe, sorting through a dozen pretty mini dresses, and lamenting their past sartorial mistakes! With hundreds of fashion journalists and YouTubers self-isolating, such content has never been so readily available.

Most of the clothes they clean out will be donated to local thrift stores – Goodwill and Savers in the United States, and Vinnies or Red Cross in Australia. As a keen op shopper, perhaps the only thing I love more than a closet cleanout video is spending an afternoon trawling through a Vinnies. Charity shops fossilize the trends of the past decade. Thrift stores, or more curated vintage shops, used to be a ready source of used but wearable garments; in the last decade, some of these finds still exist, but they are increasingly found side by side with the baffling 2010s trend of cold shoulder tops, or Cotton-On t-shirts with slogans like ‘I’m allergic to Mondays’.

If we think about the quantity of clothing which we donate to charity shops, which we personally would not even gift to our dowdiest friends, it should come as no surprise that Australian charities are sending 60000 tonnes of unwanted items to landfill every year. Alternatively, used clothing unwanted by charities – or even deadstock, unworn items from retailers – are exported to countries including Rwanda, Kenya and South Sudan. Some clothes are resold, but around 40% of clothing traded in Kantamanto, Ghana’s largest used clothes market, are estimated to end up in landfill immediately. The flood of such imports can decimate local textile vendors and manufacturing.

But when East African countries raised important tariffs on used countries in 2016, the United States threatened to remove them from the African Growth and Opportunity Act’s trade deal. The OR Foundation, a non-profit researching the secondhand trade market in Ghana, argues that the colonial frontier in Africa has expanded from resource extraction to textile waste dumping. Some of the beaches of Accra have accumulated waste from the nearby Kantamanto markets, as clothing is dumped into gutters and becomes entangled with excrement before washing out into the sea or are simply buried in the sand instead of the landfill.

Meanwhile, fast fashion labels have started to rebrand themselves as ‘ethical’ and ‘sustainable’ climate leaders – think H&M Conscious or Zara’s Join Life. This is an ultimate delusion to customers. It is physically and environmentally impossible to be ‘sustainable’ whilst churning out 80 billion items of clothing per year – enough to clothe everybody in the world more than ten times over anew. No matter how ‘ecological’ the fibre, the Earth is not meant to sustain this many fields of cotton, oil rigs for polyester, or old-growth forests to be deforested for rayon. This quantity of cheap clothing can only be profitably produced by an exploited, offshored labor force which is stripped of union rights and living wages; it can only be ‘disposed’ of by the Global North’s reliance on East African nations to drown in our waste. It is a business model which has advertised to and bred an unhappy, insecure customer base who self-medicate with retail therapy.

Vitally, this is an industry which will not slow down by itself. Like any other extractive industry, it relies on continuous growth, planetary bounds be damned, to deliver profit.

This business model, along with others, has been brought to its knees in the light of COVID-19. As a result, over $3 billion worth of orders have been cancelled by high street brands, leaving garment workers internationally without savings or healthcare access, most of them women in developing countries. As of 11 April, Remake’s #PayUp petition has forced brands including Target, H&M and Zara to promise payments to supplier, and it continues to monitor their clarity in regard to payment timing. This is necessary work in the short term. But the ultimate goal must be to change the fashion industry, so that textile manufacturers and garment workers control their own wages and working conditions, and we produce clothing which is necessary and beautiful, not only made to sell.

What possibly could a fairer, slower, and more interesting fashion industry look like? It could look like Indigenous communities protecting their land and selling resources directly to manufacturers, like the Amazon’s seringueiro communities who harvest rubber. It could look like garment workers pooling their resources and creating worker-owned cooperatives, with each designer, cleaner and sewer receiving an equal vote and a fair wage. It could look like a return to an investment in unique and locally based textile creation, as opposed to foreign imports. It is an industry which could truly empower and skill workers and could flourish with real creativity.

Clothing touches everyone’s life. A piece of clothing can hold exquisite artisanal value and the memories we personally associate with it. In a fashion landscape which has transitioned away from over consumerism and overproduction, there will be fewer closet cleanout videos – our garments will be well made, well-worn and well loved, with a lessened need to always make room for something new.

Add your voice to the #PayUp petition here: https://www.change.org/p/unless-gap-primark-c-a-payup-millions-of-garment-makers-will-go-hungry?signed=true.

Anna is in her second year of a Law and Science degree. In all seriousness, there is something she loves more than a closet clean out video, and that’s a strong climate justice movement grounded in human rights and Indigenous sovereignty. Here she is in one of her favourite Vinnies finds.

Previous All the Extra Details You May Have Missed in the Palace Letters
Next Green Thoughts #2: Investing Into Publicly Owned Renewable Energy