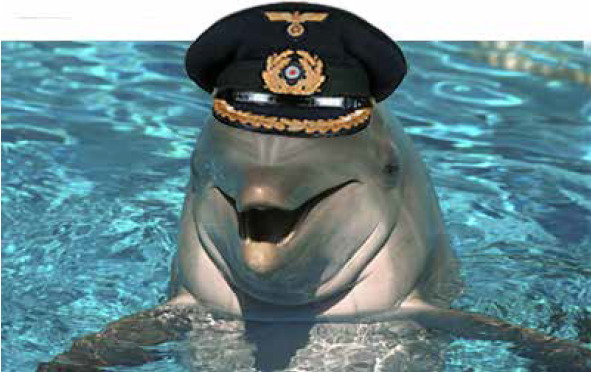 Following proclamations that the boats have been successfully stopped, Prime Minister Tony Abbott and Immigration Minister Scott Morrison are heading to Perth this week to solve Australia’s other national maritime crisis – shark attacks.

An unnamed government source has told Tharunka that the two will meet with Western Australia Premier Colin Barnett, and they will likely sign off on a new deal to trial extended border protection measures along Australia’s west coast.

Should the trial prove successful, the government will look to expand the program nationwide, the source said.

The program will be known as Operation Sovereign Surf Boarders. It will involve the use of the Australian Defence Force’s recent developments in light amplification by stimulated emission radiation technology. That technology, also known as a LASER, will then placed on the heads of infant bottlenose dolphins born in captivity.

The bottlenose dolphins, which are also frequently victims of shark attacks, will be trained at Monkey Mia’s Shark Bay Marine Park, 900 km north of Perth. There they will learn to use the technology in the open waters to fend off shark attacks.

Professor Joe King, a physics lecturer from Murdoch University in Perth, has told Tharunka it is likely that the technology will simply stun sharks by lightly burning their skin when they come into contact with the dolphins.

Because sharks frequently attack surfers and swimmers mistaken for dolphins, scientists believe the sharks will be so deterred by the new technology that they will no longer go near the dolphins and, thus, swimmers and surfers.

The program is estimated to cost the federal and state governments $4.3 billion over three years, with most of the incurred expenses coming from the need to train the dolphins. Additional logistical costs will arise from military engineers and private contractors required to construct and fit devices onto the dolphin’s head.

However, not everyone is convinced that such a tough program to reduce shark attacks is necessary. Greens leader Christine Milne has said that the policy unfairly portrays all sharks as killers. “We should not be implementing policies that prevent sharks from entering Australian waters. Just because sharks are carnivorous, it does not mean they want to kill.”

Ms Milne also indicated she is sceptical that the real government intention is to save lives at a time when beds, coconuts and Christmas trees are killing many more Australians.

As the unnamed government source indicated to Tharunka, such opposition from Labor and the Greens has been anticipated: “We value the contribution sharks make to the biodiversity of our waters. However, while we recognise that not all sharks kill people, we want to make sure the ones that might are deterred from doing so.”

Wayne Kerr, a representative of the Maritime Union in Western Australia, says the issue of shark attacks is more complex than partisan politics, but he welcomes the government’s decision to tackle the shark problem.

“Sharks are not just a threat to surfers and swimmers in WA. What is often lost in this debate is the fact that sharks eat fish and try to take the jobs of many local fishermen,” said Mr Kerr.

Note: The office of Bill Shorten was contact for comment on this issue. Tharunka was told he took his party out for lunch. Richard Marles, the Shadow Minister for Immigration and Border Protection, was later contacted. Tharunka was told to speak to someone in the Liberal party to find out what Labor policy was.