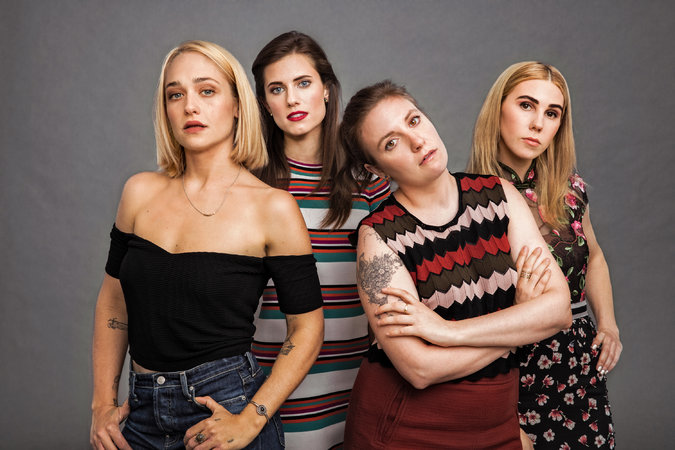 Girls Like Me Say Goodbye To “Girls” With Sadness And Thanks

Recently, Girls filled our screens in all its bold and honest glory for the last time. I saw it go with some sadness; as a young woman in my 20s, I identified with and was empowered by Girls for a hundred different reasons. Here are the main three:

Its Honesty About Bodies

Girls was one of the first times my friends and I had seen women who looked like us being given a voice on television. Its lead character, Hannah (Lena Dunham), had thighs that, like our own, were wide. It had characters whose stomachs drooped, and whose skin wasn’t perfect. The women weren’t even necessarily overweight; they were just regular.

Before Girls, I do not think I had ever seen a show where a female lead was overweight but also a character in her own right. Usually, they were comic relief or foils for “hot” leads. The fact that this prompted so much discussion, despite Hannah being the only major character who is not stereotypically “hot”, shows just how unrepresented bodies like this are on television. It was empowering to watch a program that didn’t fall into this trap.

Also striking was the fact that few comments were made about these women’s bodies.

We saw Hannah and her friends showering, attempting to exercise, working, eating and having sex. We saw all this without filters or unrealistic neatness and prettiness. We saw, on screen, how bodies work in reality, and these bodies and their actions were not minimised.

Women doing unremarkable things were treated as important enough to film, even if they didn’t look feminine or alluring or “sexy”. Their bodies were secondary to the acts they were performing with them.

In a society where women are pressured to pluck and run and squeeze and diet until they look perfect, and our bodies are purely a tool to service this goal of physical perfection, Girls was a radical and empowering breath of fresh air.

Its Honesty About Sex

Sex in Girls was not always comfortable or easy to watch. Clumsy, awkward and rarely eventuating in mutual satisfaction, it was a far cry from Hollywood’s sexy and seamless sexual encounters. Instead, it was sex full of strange sounds, unexpectedly soft body parts, and, at times, bouts of pure boredom from the participating women.

As unappealing as this sounds, it shows the truth of how women in their 20s often experience sex. While it can be great, often it is not, and this is something that television often fails to depict. Most women I know can identify with Shoshanna after she has just slept with Ray. He is cuddling her, in pure bliss, while her expression (of which he is unaware) is one of awkwardness and discomfort.

Having differing experiences from their partners has been an unfortunate reality for most of my female friends. Working out what you like sexually, and having the confidence and agency to ask for it, as a woman, is difficult. So is learning to wield your sexuality not as a weapon or something to allure men, but as something that is your own.

Girls showed us this journey, with uncompromising honesty and vividness. It meant so much to my friends to see this sexual honesty given screen time in an industry known for glorifying unrealistic sexual expectations.

Often described as the show that launched a thousand think pieces, Girls sparked conversations about my generation, by my generation, that were far more candid and deep than much of the discussion that had come before.

To start, the show is pretty much one giant think piece. It is Lena Dunham talking about what it means to be a privileged, female, 20-something, who’s just really bloody struggling at life. It is about the sort of people who watch it: Generation Y-ers who seemingly have it all, but are also living through messy friendships, crappy jobs and a whole lot of pressure.

Many think pieces picked up on this, using it as a platform to let us talk about how our experiences are the same or different to what Girls represents. For the things that rang true, this brought a sense of solidarity amongst people my age trying to make it in the world, as Hannah Horvath is. For the parts that weren’t so representative of reality, it inspired critical conversations with often-positive results.

Take the criticisms leveled at Girls about its treatment (or lack thereof) of race. There is a noticeable lack of diversity on the show. Some people have argued that these were unfair attacks, which sometimes was right; Rebecca Traister observed that Girls was targeted with much more zeal for its lack of racial diversity than many other institutions that are much bigger sinners in this regard. There’s also a persuasive argument that it was never meant to be about all races, but about a white and privileged woman and her experiences.

Justified or not though, what is most notable about Girls and its lack of racial diversity is how people responded. As disappointing as its inability to deal with race was, it highlighted that society as a whole is much better in this regard than it often seems. The fact that people even talked about it as a problem is promising. It also meant that the spate of similar shows that came after it, such as Broad City and Search Party, have consciously had to approach race in a much more inclusive way.

And this is, I think, the thing that I love the most about Girls. It’s sparked conversation and criticism about body shapes, friendships, sex, selfishness, race and a thousand other topics. It didn’t answer all of the questions it raised. It didn’t deal gracefully with every issue it addressed. And not everyone liked the insights into the life of 20-something women trying to find their place in the world, whether that was because they found it to be either too honest or not representative enough.

But everyone talked about it.

This was Girls’ power. It provided a home and a platform for all the insecurities and hopes that women my age hold. It normalised how we feel. For that, I cannot thank Lena Dunham enough.

Previous The Stella Prize Helps More Women Than Just Its Winner
Next An Interview With The UNSW Times: It’s A “Wild Fkn Journey”