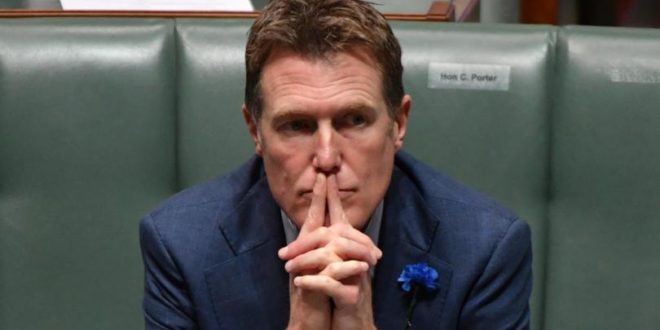 Ghost Money and Suspected Dark Dealings: is this the downfall of Christian Porter?

A few months ago, we brought you a story on Christian Porter’s failed defamation lawsuit against the ABC. Now that he has resigned and new information has emerged on the court case, we revisit his turbulent story and how perceptions of him have changed.

It was tantalisingly predicted to be the ‘trial of the century’. Teams of opposing lawyers were matched up and analysed like sport stars as Christian Porter accused the ABC of defaming him. We covered that story as it happened a few months ago.

Few sat on the fence regarding the issue at hand. Did journalist Louise Milligan simply do her job reporting for Four Corners? Or did she cross a line, as Porter vehemently asserted, scrambling for non-existent clues that pointed to his guilt?

And now, we find, the former Attorney-General funded his legal costs for the lawsuit through an unknown and anonymous blind trust.

A blind trust is a set of funds owned by someone – often shares owned by a business owner or other person with lots of dormant money – that is placed under control of a trustee (in this case Porter).

Neither Porter nor the unknown benefactor of this fund has authority to decide what to do with this money while it is in the fund: a third party, whose identity is also unknown, permitted porter to access the fund for the purposes of his legal fees. Blind trusts are usually used in situations where the trustee might find a conflict of interest between the intended use for the fund and their own needs or interests, so politicians often use them to maintain impartiality in their decisions on where to allocate money.

Now, donations to a political party or one of its members above a certain threshold must be disclosed and are made publicly available – this includes the identity of the donor – so in light of this revelation, Former PM Malcolm Turnbull described is as “like saying my legal fees were paid by a guy in a mask who dropped off a chaff bag full of cash.”

Others critics painted similar pictures: that the money ‘fell from the sky’, or that he has ‘driven a truck’ through parliamentary disclosure rules.

For this to happen to a golden-child – private school debater, most eligible bachelor of 1999 – is quite a plummet from the lofty heights and reputation he has maintained throughout his life. Is this a unique tragedy? Or just another high profile figure that turns out to be a monster?

Over this time, proportionally to the pressure mounting on him by the scandal, harder and harder truths have been revealed about his actions. It’s much harder to say for sure what something is, than what something isn’t: we knew that he had been accused of a decades-old sexual assault; we knew that he didn’t like the light Four Corners put him under, and that he was interested in taking legal action. Then we found out he did, and later withdrew it. We knew that he said it was a ‘humiliating backdown’ on the ABC’s part – but we also knew that the opposite was true.

What we know now about the ghost money he received, it would seem, is that Porter is far more comfortable with people not knowing the definitive truth than knowing something is suspicious. In a media statement, in fact, he specifically said, “I am not prepared to seek to break the confidentiality of those people who contributed to my legal fees,” shady to those such as Turnbull; Opposition Leader Anthony Albanese asserted that it “does not pass the pub test,” a go-to phrase of his. The response to these new revelations has been undeniably suspicious of him.

Porter continued to paint certain events as the opposite of what they are. As we stated, the ‘humiliating backdown’ the ABC was accused of was actually officially recorded as a ‘capitulation’ by Porter. His statement above regarding the confidentiality of the people behind his trust is directly contrary to Public Duty and Private Interest Act 1979, the most recent report that addresses a politician’s conduct surrounding blind trusts, which states that “It should not be possible to avoid the obligation to disclose an interest, whether by resignation or declaration, through concealment in a trust agreement.”

But his statements here can’t officially be called lies. He could simply be incorrect, unaware; that could just be his opinion. It takes a lot to call someone a liar.

Take the ‘Robodebt’ scandal from a few years ago: the automated overcharging of welfare recipients by thousands of dollars per person that Porter in 2018 admitted to blundering. It is officially called a clerical error that cost the least well off in this country millions; it resulted in people taking their own lives out of destitution. Those that experienced that drama watch on now and witness another Porter error.

We can’t say for sure if Christian Porter lied in that scenario or this one. But we know, certainly, that he has made a series of decisions whose consequences included losing titles, high-profile government positions, and of course generating great public backlash.

This conversation is not over; this is not the last piece Tharunka writes on Porter. Remember, he has resigned from the frontbench only, meaning he is no longer in the PM’s inner circle of ministers (professionally, at least), but still represents his electorate in the house of representatives. He is far from out of the picture.

What we can say for sure, though, is that he seems to prefer losing his status than revealing the truth of the situation.

Share
Previous What are your SSAF fees used for, and how much funding does Arc really get?
Next UNSW students miss out on academic amnesty as failed courses count toward Term 2 results