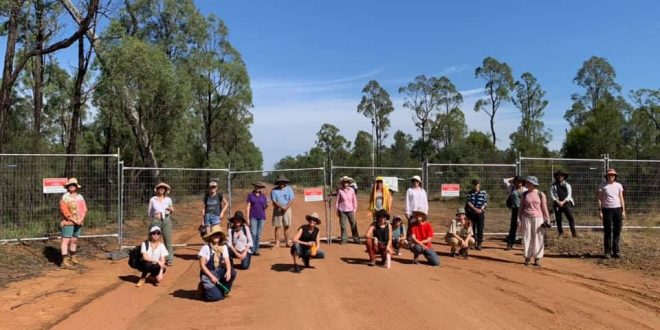 Gas in Australia’s Largest Inland Forest: On the Ground

Megan* is one of the permanent artisan potters living at Pilliga Pottery and Farmstay. This is located on Gomeroi Country in the heart of the Pilliga Forest, a half hour drive from the centre of Coonabarabran, the nearest town. She’s invited me to watch her freehand carve the Pottery’s signature blue wren design onto a small urn, and she’s wearing a purple shirt which states, “I am silently correcting your grammar.”

I asked her whether she was going back to her hometown for Christmas.

She looked at me expectantly. I had clearly missed a beat in the conversation.

“Rain,” she explained. “Let me show you something,” she said, putting aside her tools. “This,” she said, showing me a photo of some trees and some small brown shrubs, was taken in January. And this,” she continued, taking me to the back of the studio and opening the door, “is where that photo was taken.”

The grasses which blanketed the hill which fell away from the door weren’t the vibrant grass green of urban lawns, but the green so characteristic of the Australian bush – yellower, and somehow steelier. The trees vibrated with birdsong.

When we think of Australian forests, we often think of Queensland’s tropical Daintree Rainforest or the wet sclerophyll forests in the Blue Mountains. The Pilliga, Australia’s largest inland forest, is made up of tougher semi-arid woodland. It endured three years of drought before the return of La Nina this year. So long-awaited was rain in the Pilliga that when deluges of rain started to hit the hardened top layer of earth, the water made its way into, and eroded, the layer underneath. The forest floor was literally split into more than 500 cracks, some of which were more than a meter wide, while others were up to three metres deep.[1]

People like Megan, who live in the Pilliga or in nearby towns, know the names of the birds which did not make it through last summer’s bushfires, and whose numbers have been declining for the last few decades. The forest was in the throes of the summer’s first heatwave, even though it was the first weekend of December. I realized why these communities are called the ‘frontline’ of climate change. And it is here that Santos, Australia’s second largest oil and gas producer, is waging war against the Pilliga.

Coal seams are bands of coal deposits, and coal seam gas (CSG) simply refers to the natural gas which bonds to coal seam surfaces. Since underground coal seams are usually filled with water, CSG wells need to pump water out of the seam so that gas can flow to the surface.[2] This waste water can be polluted with salts, heavy metals, and toxic and radioactive compounds.[3] After gas is extracted, it has to be refined further to remove impurities. One of the most infamous steps of the purification process is called flaring, the release and ignition of excess gas, resulting in the emission of carbon dioxide.[4]

Under exploration licenses, Santos has been extracting coal seam gas in the Pilliga for the last twenty years. During that time, protest camps and lock-ons have often helped to delay the construction of water treatment facilities and gas wells.

Over the first weekend of December, seven UNSW and UTS students from the Australian Student Environment Network (ASEN) travelled to the Pilliga to learn about another tactic to delay Santos’s construction. Citizen science, research conducted by ordinary community members, is not new – for example, the UNSW BEES Volunteers Facebook group regularly advertises opportunities for students without prior training to participate in overnight floral and fauna surveys. In the Pilliga, citizen science, whether it be the collection and testing of water samples at an abandoned worksite, or surveying soil run offs near Santos wells, takes on an added political purpose.

This year, the need to step up community-backed scientific regulation has escalated. After a decade of debate and strong community opposition, the NSW Independent Planning Commission (IPC) granted Santos conditional approval in September to build 850 new coal seam gas wells in the Pilliga.[5] The final hurdle for approval was cleared last month when Federal Environment Minister Sussan Ley signed off the project, again, subject to several conditions.[6] The federal conditions require Santos to submit several Management Plans, pertaining to water resources, chemicals management, and threatened species. There is no reference to the cultural importance of the Pilliga to the Gomeroi people in Ley’s approval.[7]

Management Plans might seem like a good regulatory requirement, but from the perspective of Jo, a community activist at North West Protection Agency, it is part of a troubling regulatory shift which empowers companies to set their own procedures, instead of forcing them to follow government conditions. “These Management Plans are secretly approved by the bureaucracy of the Department of Agriculture, Water and the Environment,” she explained. “They’re private unless we submit a Freedom of Information to access them.”

And given Santos’s environmental track record, local residents have little reason to believe that Santos will extract gas in a way which can preserve the local forest, but just as importantly, the underground Great Artesian Basin – Australia’s largest underground aquifer, and the predominant source of fresh water for inland Australian communities.[8] On Saturday, we were driven out to Bibblewindi Water Treatment Plant, a site where a spill of contaminated water had occurred in 2011.

Some of the spill zone was fenced off, with a sign reading ‘Rehabilitation in Process’ on it. Inside, some tree guards, about half a metre tall, enclosed saplings which were barely taller. “They have to replant saplings every six months or so,” Jo explained. “Nothing grows there for longer than that. You can see where the waste travelled through the forest… see that bare path gap between those trees?”

“And see here,” she continued, now directing our attention to a small tumour, ringed with green, on the ground. “That’s algae. We think that it might be caused from the contaminated water underneath the ground, being pushed up by the Basin’s water table…”

She continued to point out things which were out of place. Accumulations of wood chips and soil a few metres away from Santos’s wire fences? That was run off from Santos’s facilities, sometimes containing fragments of wire netting, plastic tree guards, and fiberglass irrigation nozzles. Patches of forest floor with a shiny, cracked surface? Not so sure. After we had left the Treatment Plant and driven back to our accommodation, a member of Extinction Rebellion Sydney said that a group leader had pointed out that some of the ants pacing across the floor were carrying little pieces of tar. They were mining out contaminated soil and bringing it up to the surface.

These were signs which, had I been a regular Sydney backpacker, I would have missed altogether. But for local residents, the parts of forest which were near water treatment plants or wells was morphing into another landscape right before your eyes – one where damp algae festered and six month old saplings died.

“It’s a horrible thing to tell your grandchildren that they cannot play in the forest or swim in the river,” said Aunty Deb, a Gomeroi elder. “This land is sovereign. It doesn’t belong to Santos. It doesn’t even belong to me – it belongs to my grandchildren.”

My friends shook me awake on our last night. It was thunder storming, and we were camping outside.  When the intervals between the lightning flashes and the claps of thunder started to disappear, we grabbed our sleeping bags and bolted to the nearby indoors pottery studio, soaked and laughing deliriously. We tried and failed to fall asleep on the couches. We were being eaten alive by mosquitoes. The storm subsided. We decided to go back to our tent.

The storm had disappeared so quickly that the sky was clear when we went back out. The signs welcoming us to Coonabarabran had called the town ‘The Astronomy Capital of Australia’. No wonder – necks craned, we stood outside looking at the stars for a minute.

My friend and I brought this up with a local named Roger the next day as he drove us up to Gunnedah Station. He mentioned that astronomers from Coonabarabran’s Warrumbungle Observatory had given evidence to the NSW IPC that Santos’s gas flares could create enough light pollution at night to interfere with their normally clear forecast.

I had come up to the Pilliga raging at the expansion of gas in NSW, because it was outrageous that Australia would expand the fossil fuel industry given the amount of carbon dioxide or methane emitted or leaked during production. I felt permanently traumatized from the memory of Australia’s bushfires. I came away with motivations which were more elemental. I want children to play in the forest, under bright summer nights cooled after the storm.

*Names have been changed.

Share
Previous What’s Past is Prologue #2: The Hidden History of Luna Park
Next Living in Yesterday