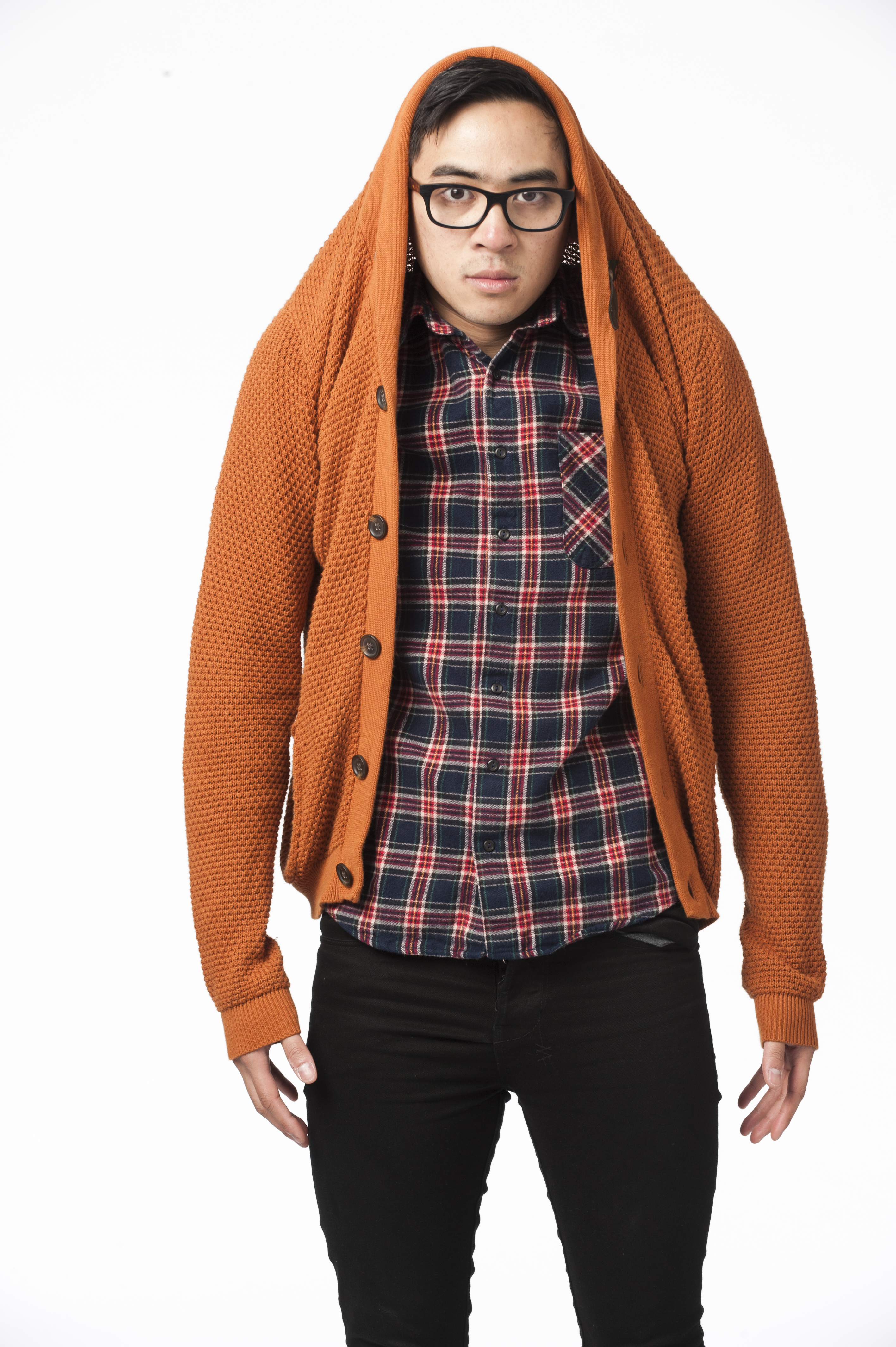 In my list of ‘people who work in occupations that means I would like to date them’ – comedian ranks pretty highly. This was unfortunately not the reason I grabbed a coffee and talked about love and life with stand up comic, Michael Hing.

Upon meeting Michael Hing, a 28-year-old, bespectacled, skinny, t-shirt wearing, soy-flat-white-drinking, stand-up comic, your first impression will probably be along the lines of: ‘Man – that guy would suck at the Hunger Games.’

“I’m shit in every game, any game in any situation you put me in I would be terrible at. Literally. Comedy is the only thing I’ve ever wanted to do. It’s the only thing I’ve ever excelled at,” Hing agrees. “I have been doing comedy with nothing else [no other supporting income] for 2 months now… It’s pretty silly, it’s an incredible privilege and people are being very supportive of me.”

Hing’s latest show, Bildungsroman, is basically an epic love story. He describes it as “a hour long show about love, adventure, growing up and realising some stuff at 28 that most other people worked out in high school.”

Bildungsroman is less girl next door falls in love with nerdy uncool guy and they live happily ever after – more awkward Ferris wheel rides and not telling someone how you feel for LITERALLY YEARS. Hing philosophises our generation’s inability to express our feelings- but ability to copulate like rabbits – doesn’t actually mean we are all terrible people.

“I think actually there are some benefits to this new kind of culture. There is less pressure, you meet people and hang out with people – you don’t have to [have an end goal]. It’s just like ‘hey we are enjoying this and this is fun now.’ That’s a really tough thing to admit, because… I think there is a certain moral taboo with being ok with that. When I was in like my early twenties I would never really want to hook up with people without pursuing some sort of relationship because I would think I don’t want to be frivolous, I don’t want to be using people for their bodies’ or whatever. Not realising that obviously other people could be just as ok with that as I am. People would say things to me being like ‘oh this is fine only for tonight’ or whatever, and I would be like ‘oh they’re just saying that.’ But that’s totally presumptive.”

These days Hing has mellowed and expects far less from his interaction with the opposite sex. To be particular, his list of ‘Qualities a girl must possess to be GF material” has shrunk by approximately 4,998.

“They [Hing’s ideal girlfriend qualities] are much broader now, they are: people who read and people who smile. That’s basically it. Cos I think everything else can be changed,” he laughs – but he isn’t joking.

“I think people who smile as their natural kind of , the way their face naturally falls, they’re happy people… I have enough negativity from inside me, and from my cynical comedian friends that I like hanging around happy people. People who read are the best because they are constantly seeking out new ideas and new knowledge and I think that’s a really admirable thing for people to do.”

Hing practices what he preaches, and is also avid reader – but not necessarily in an ‘I’ve read every penguin classic 20 times’ reader.

“I have only recently started reading fiction, for a very long time I only read non-fiction books. Because I thought ‘what’s the point of storing this information in my brain, stories about this made up thing? That’s pointless.’ My friends were saying ‘well there is a certain joy to beauty and language’- I was like ‘yeah but where do you draw the line, next thing you’re going to be defending poetry?’ This is obviously an ironic attitude to have. I obviously don’t think that poetry is an illegitimate art form. I am pretending to be a philistine for whatever reason. I just think it’s funny.”

“Over the past decade, I have mostly been reading heavily left-leaning political books. Like Naomi Klein and Howard Zinn and Noam Chomsky – some real undergraduate bullshit going on,” says Hing

“It got real bad for a while, I was unsociable in my political views, a real drag to be around to be honest,” Hing sheepishly admits.

It isn’t hard to imagine what a younger, more naïve and idealist Hing would have been like.  A little neurotic and slightly unHinged at times, Hing is still slightly brash in his opinions. Despite his self-deprecating quips at his lack of intelligence, Hing can string together a well-articulated nugget of wisdom with seemingly little thought. A lot of Hing’s previous material centres around very serious conversations about race in Australia. The comedy that he presents has depth to it, as well as serving its purpose as entertainment. Hing thinks that this is why he is often labelled an “alternative comedian”. Saying that people come to his show and expect to be challenged, ‘It’s not a walk in the park.’

“I think obviously growing up in a non-white background, talking about not being white is pretty well travelled groundFrom a very young age I realised that your race or background doesn’t actually define you as a person at all, the only way it actually affects you is the way other people treat you. You just had a lot of people talking about ‘I’m Chinese therefore I can’t drive.’ Those stereotypes are unhelpful and they’re divisive and they’re gross… I think there is a conversation that needs to happen in Australia, because Australia is much better than other places are but also much worse than a lot of other places are in terms of racism and racial relations. We don’t talk about it we deny it and you know we get defensive and yeah and I say we because I include myself in that.”

Marry: If you could have dinner with anyone for the rest of your life, who would it be?

In the stakes of longevity I will say Cornell West. Cornell West I think is a genuinely thoughtful and intelligent public intellectual who has a lot of opinions that I think are morally consistent with his worldview.

Snog: Who is someone who you are obsessed with/admire, but have no rational reason to do so.

It would probably be a musician I think. I think it would be someone like Nick Cave. Who I am really into and really enjoy the music of and who I find it ever more difficult to justify my like of his music because I got into it when I was a child essentially and I am now growing out of that.

Avoid: Who are you willing to call out as someone who represents all the things you think are wrong with the world?

Scott Morrison. He [represents] a lot of things that I genuinely find disgusting. And I use those words very carefully. The way that he is obscuring his ministerial duties from public scrutiny is I think, genuinely reprehensible, first of all. . The second thing is that he is engaging with policies that are inarguably immoral which either he believes in or that makes him someone who is kind of compassionless OR alternatively – he doesn’t believe it and is just bending to the whim of bigots… Throughout that he is praised by a lot of Australians,  I mean I guess a lot of Australians don’t know who he is – but his policies, that stop the boats sort of mentality is praised by a lot of Australians without any real thought being put into it. It’s just this disgusting xenophobic view.

If you ruled the world, what’s the first change you would make?

The one person one house policy, which basically prevents land barrens. This is probably the most revolutionary idea ever. So I have this idea that in Australia you should only be able to own one house per person, so it lowers investment properties, it sends real estate agents out of business and that’s great because real estate agents are fucking leeches right, it makes housing more affordable and studies show that home ownership increases social stability it allows people to get out of poverty and stuff. SO yes 1p1h.  – He went on to explain all the technicalities of this – including “House bots don’t count as  houses – but if you are building a house boat in a pool, in an enclosed body of water that you own, then that does count as a house. IF it’s on open water – you’re fine.