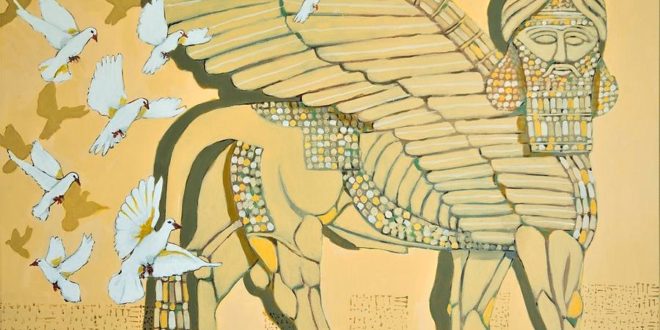 "Peace to Assyria" by Paul Batou, published with artist's permission

Ethno-cultural associations like Assyrian Students’ Association provide a means of celebrating culture within a multicultural environment at UNSW.

Australia consists of a multitude of ethnic groups who have made their way into the diaspora for various reasons, whether it be escaping persecution or attempting to improve their livelihoods abroad. For many of these expatriate groups, they have the privilege to maintain a tangible connection with their homeland. They might experience a sense of belonging to the global community when viewing athletes from their home country competing  at the Olympics, or seeing their country’s flag flown outside the United Nations headquarters. However, this privilege is not enjoyed by everyone, specifically stateless communities such as Assyrians, Palestinians, Kurds, and others.

Assyrians are a transnational ethnic group indigenous to Assyria, a geo-cultural region spanning contiguous parts of Iraq, Iran, Syria, and Turkey. They speak Aramaic, a language that was once considered the lingua franca of the Middle East. Like their language, Assyrians have also seen a reduction in their population in Assyria, with over 80% of their population specifically driven out of Iraq since the 2003 invasion spearheaded by the United States.

There are two predominant factors contributing toward the ongoing exodus of Assyrians from Assyria. In Iraq, Assyrians are predominantly Christian and often viewed as collaborators with the invading Western forces due to their shared faith. This led to sectarian violence that could not be contained by the Iraqi government, driving Assyrians to seek refuge in the West where they could be granted protection from religious persecution.

The situation worsened in 2010 when Al-Qaeda stormed Our Lady of Salvation Church in Baghdad, murdering 52 Assyrians during Sunday mass. As a result of the attack, there was an estimated 213% increase in departures of Assyrians seeking refuge in other countries

As the indigenous people of the region, Assyrians continue to face hardship in the Kurdistan Region of Iraq, where land encroachments by neighbouring Kurds still occur in Assyrian villages. In 2016, Assyrians from the affected villages attempted to protest outside the region’s parliament but were blocked by checkpoints set up by Kurdish authorities that prevented them from entering the region’s capital.

With no state to govern their own affairs, Assyrians have been at the mercy of other groups governing over them. Calls for the creation of an autonomous territory in the Nineveh Plains of Northern Iraq were severely reduced following the assault on the region by the so-called Islamic State in 2014.

Ultimately, stateless groups will not be free of persecution unless they obtain self-determination to govern their own affairs. Without an official state, it becomes increasingly difficult for stateless ethnic groups to preserve and pass on their culture without the fear of completely assimilating to surrounding cultures.

Since Assyria is spread across four countries, each group of Assyrians were affected by different geopolitical situations. Many Assyrians in south-eastern Turkey began to flee to nearby Europe in the 1960s due to anti-Christian sentiment in the region. From then on, Assyrians from Turkey would continue to migrate to Europe to reunite with family members.

Similarly, Assyrians from Iraq and neighbouring countries began to migrate to Australia in the 1960s due to the rise of pan-Arab nationalism which left many Assyrians feeling unsafe. My family’s journey began in 1973 when my father fled from Iraq to Lebanon as a teenager, temporarily staying in Beirut before being sponsored to Australia by relatives in Sydney. My mother’s journey was different. The Iran-Iraq War of the 1980s accelerated the immigration of Assyrians from Iran and Iraq to Australia under the Special Humanitarian and Family Reunions program, as there was a considerable Iraqi and Iranian Assyrian population within Australia. Migration was further spurred by the war between Iraq and America in the 1990s which caused many Assyrians, including some of my mother’s siblings, to flee due to sanctions imposed on the country. My mother made her trip to Australia in the early 1990s, temporarily staying in Istanbul before arriving in Sydney to care for one of her siblings.

Initially, Assyrians settled in the Eastern suburbs of Sydney, most prominently Randwick and Hillsdale. However, in the 1970s the group began to settle in Fairfield due to the many job opportunities and affordable housing. Since then, Fairfield has become a hub for Assyrian immigrants where there are community services, churches and a large community presence.

As a first-generation Assyrian-Australian I haven’t had to endure the discrimination my parents or other Assyrians had to face, however I have been deprived of my connection with Assyria. It was often difficult to articulate my ethnic identity when it was unknown to the average Australian and often mistaken for “Syrian”. This prompted me to take a greater interest in my family’s history which was my personal connection to my heritage. Eventually, I came to the realisation that although Assyrians don’t have an official state, there were mediums in the diaspora that could be used to maintain my cultural identity.

In 2019, I co-founded the Assyrian Students’ Association with several other students at UNSW. The association was founded with the primary intention of allowing Assyrian students at the university to collaborate in promoting our culture with the wider community at the university. Since its inception, countless students have come past our stalls, interested in our culture and wanting to learn more. Many people come with their own understanding of who Assyrians are, sometimes confusing us with Arabs, but, always open to understanding more about our ethnicity. This has been beneficial in allowing Assyrians in the diaspora to promote our cause.

The association also provided me the opportunity to represent Assyria in events such as the Intercultural World Cup, a tournament between several ethno-cultural associations at the university. What might seem like a trivial event to many meant so much to me. I was able to represent a nation I wasn’t privileged to see in sporting events like the FIFA World Cup.

Ethno-cultural associations like ASA provide a means of celebrating culture within a multicultural environment. Inter-cultural events provide the opportunity for different associations to connect and enlighten ourselves on our similarities and celebrate our differences. By educating ourselves on each of our respective cultures and better understanding cultural nuances that are commonly overlooked, we can create a tolerant society where we’re able to co-exist.

Share
Previous Are students in support of UNSW’s nuclear education program?
Next International students not required to quarantine upon return on December 6