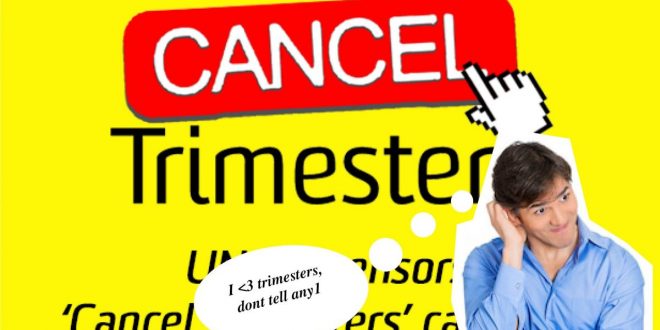 Found outside the Chancellery, a message written in blood: ‘cancel trimesters.’

Environmental Science students are in despair, one  that we spoke to stating that despite having spent years fighting against the mould of institution and raising awareness for every student-centred movement on campus, having to hand out one just more ‘cancel trimesters’ flyer had finally convinced him that every tree is precious, no matter the cause.
Meanwhile, one Arts student told us that although she drooled at the thought of sipping Aperol Spritz on the Amalfi Coast during mid-semester break, asking her father for one more loan wasn’t worth what she would eventually have to ask for, post-degree.
Trimesters – now in the flesh.
Blood has been found dripping from the opening of the “Chamber of Less Weeks”, collecting in a pool outside the library.
And now the enemies of the heir, beware.

But what about the students who aren’t scrubbing blood or gouging their way out of a pile of bones left from term one? They sure aren’t formulating a witty response to the Vice Chancellor’s recent email. At best, they’ll be seen avoiding student journalists and standing on the other side of the barbed-wire fence. Their lips pursed, unwilling to betray their sins to the mob, for fear of crucifixion, or worse.
I’m talking about those who are impartial to the new trimester system, or maybe even prefer it.
These students will probably be scoffed at, disregarded, or even shamed for their opinion. And as we’ve seen throughout the course of history, the voices of the minority are usually undermined by the will of the collective and the strong.
So if we can’t hear them right now, over the booming protests and the rebellious commentary in the Sydney Morning Herald, where are they hiding?

Lurking on level 8 (the quiet floor) of the library we find Tom Houlden, student of Philosophy and Psychology. Asked about the change from semesters to trimesters, he whispers “I reckon it’s pretty good. One’s company, two’s a crowd, and three’s a party…”.
I laughed in pleasant surprise, only to be immediately shushed by those around us. Tom then led me to his best mate, Aram Perez, a student of Renewable Energy Engineering and Commerce who was loitering near the coffee cart, trying his best to avoid the protesters.
“I think it’s a change we all need to accept and work with,” he shrugged. “Each subject drags on for less time now”.
As simple as that. He grabbed his coffee but was hesitant as he went to walk away. Perhaps I was going to get the “you shouldn’t write about this” warning but instead he smirked, “Even then, there are still more weeks in a term than passes on my academic transcript”. Maybe he wasn’t the best person to ask, but the reusable coffee cup had been such a teaser.

Even beyond such brief interactions, I was steadily finding this common ground among a minority of students who admitted, as if telling me a secret, that they thought trimesters weren’t all that bad.
At the first tutorial for a third-year Media course, the tutor asked three questions in order:
“Does anyone here love trimesters?”
Five hesitant students raised their hands.
“Does anyone hate trimesters?”
No movement.
“Does anyone not really care either way?”
The remainder of the class raised their hands.

From my own experience, three weeks off from university was a wholesome and perfect amount of time to detox from assignment stress, save money, and refresh for another demanding set of ten weeks. I’ve found in life that when you have just the right amount of time to spare, you tend not to waste your precious days moping away and drifting towards pointless activities. Sometimes, too many days off is a procrastinator’s worst nightmare.
I know this is a minority perspective within the enormous institution that is UNSW. Trust me when I say that I can gauge how many other perspectives there are – you could fit my hometown’s population more than three times into the university’s 59,000 students. I am also aware of the negative experiences of trimesters, such as the stress of the change from thirteen weeks of content, which are now being crammed into ten.

But that’s what is staring me straight in the face as I sit down to write about trimesters: change.
As humans, we are fearful of change. We initially perceive it as an interference to our autonomy. We prefer what is known and has been around long enough to afford us a safe and consistent space. Outside of university, when I first began experiencing anxiety, my doctor put it down to stress induced by change. Situations that test stability and familiarity is a shock to any system, as it was to my physical and mental health.
To steer back to the conundrum most teachers and students are currently residing in, the real question we should be asking – is it all a shock because of change? Right now, everyone is processing the first real change to a major university system. Of course, there is upheaval. Of course, there is strain.
I am hopeful, like many other media students, thinking to myself that perhaps time will heal all, as we adapt to this new way of doing things. Or I will be confirmed wrong. Either way, time will tell.

Claire “Keenan” is a journalist student /published freelance writer who covers topics from the drought to the taboo of taking nudes. She works at a bookshop so she can read on the job, loves cups of tea and living with friends. If you date her she will write about you.