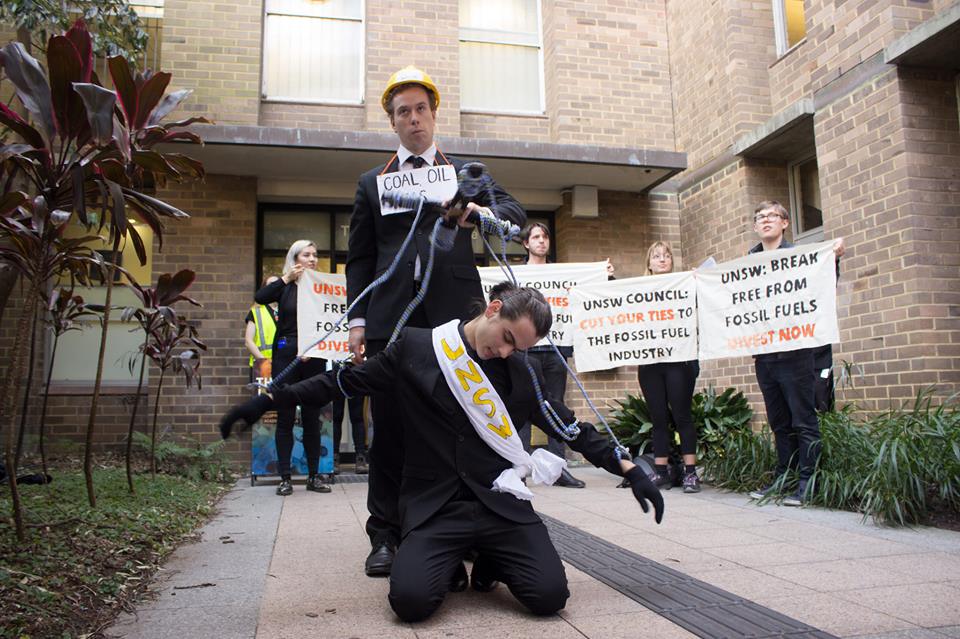 The Fossil Fuel Industry is Corrupting Our University

Growing up, I was a fairly inquisitive child. I was always the first to question what I was being told, and the last to be satisfied with the answer I was given. Not only did I want to know why things were the way they were, I needed to know. Fast forward to my early 20s, and I’m still asking questions, but this time the answers have serious implications, not just for the way our University operates, but for our future.

A group of students known as Fossil Free UNSW have been campaigning for divestment for four years. US$5.5 trillion has been divested from fossil fuels globally. This left us questioning: why does UNSW continue to invest in the kind of climate destruction that we’ve seen from Hurricanes Irma and Harvey, when our future is so clearly at stake?

We made the question that we’d been asking ourselves a question for Chancellor Gonski. In August, we wrote him a letter asking him explicitly what was holding UNSW back from divesting from fossil fuels, and requested that he expose any ties between fossil fuels and the University Council. Despite over 700 staff and students signing the letter, he refused to provide us with information about the links between UNSW and fossil fuel companies.

In late September, the “Exposing The Ties” report was released, revealing research and governance ties between fossil fuel companies and many Australian universities. Here at UNSW, the news is perhaps unsurprising, but angering nonetheless.

Sitting on the very Council that decides whether UNSW divests is Maxine Brenner, a non-executive director of fossil fuel companies, Origin Energy and Orica. Worse still, UNSW has deep financial ties with the fossil fuel industry, receiving more than $5 million in research funding from the Australian Coal Association Research Project (ACARP) since 2013, which boasts that it is “100% owned and funded by all Australian black coal producers”.

The fossil fuel industry in Australia relies on institutions like UNSW to maintain its social licence. As Fossil Free UNSW has brought together students and staff to loosen the industry’s grip on our University, UNSW has responded by digging in its claws and refusing to let go.

We are concerned that these ties have serious implications for the role UNSW plays in either combatting or contributing to climate change. How can we trust the decisions UNSW makes, and expect them to be made in the interests of students, staff and the community, when they could be influenced by dirty money and vested interests?

Of course, it’s easy to feel powerless with news like this. After all, the fossil fuel industry has trillions of dollars behind them, and we are just ordinary students. But, students and staff must act boldly in the fact of UNSW’s continued complicity in climate injustice and its refusal to cut ties with the fossil fuel industry.

To mark the release of the report, with the backing of thousands of staff and students over a four year long campaign, we gathered on the morning of Tuesday 19 September to shut down the Chancellery building, in the heart of the University. We read aloud excerpts from the report, exposing the dirty ties our university has with the fossil fuel industry, which are threatening our lives and the lives of millions across the world.

If we want our University to be a place of democracy and transparency, where decisions are made in our interests, we must continue to take collective action that challenges and confronts UNSW’s dirty ties with fossil fuels. That means students and staff coming together to organise across faculties and through clubs and societies, to take back our University.