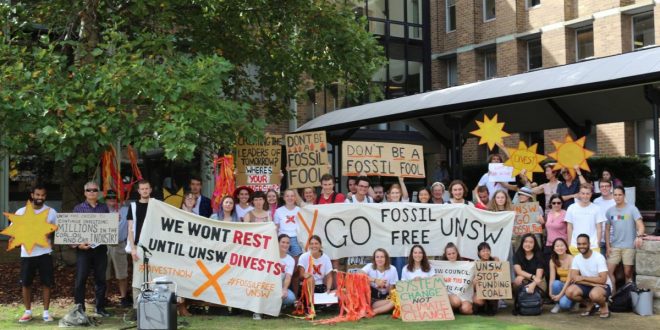 The University of New South Wales has announced their commitment to divest from all fossil fuel company investments by 2025. The change in investment policy, which was announced on Thursday the 5th of March, is a step towards UNSW’s aim to “find solutions to climate change”.

Currently, the University’s investment portfolio includes $16.2 million held in companies that directly own fossil fuel reserves. The move hopes to divest from both stocks and bonds held in companies whose primary business is the ownership and exploitation of fossil fuels.

This development is a direct result of 6 years of tireless campaigning and pressure being applied to the University Board by a student-led environmental group on campus, Fossil Free UNSW. A spokesperson from Fossil Free told Tharunka, “we are so excited that UNSW has committed to divesting from fossil fuels. This announcement has been the result of countless petitions, rallies and sit-ins organised by students and staff, and highlights the power of ordinary people coming together and demanding climate action.”

In 2014, the University of New South Wales voted against divestment, stating that “divestment would risk positioning the university as a political actor rather than an academic institution”. However, given Thursday’s announcement, it seems the university can no longer take this stance and feels obligated to act in response to the climate emergency. By divesting, UNSW is no longer financing or validating the social licence of Fossil Fuel companies and is aligning its investment policy with broader goals of sustainability.

It is important to note that the university has not provided details as to the exact timeline or process of divestment. Professor Jacobs has only stated that task will be completed by 2025 “at the latest”.

The university is also aiming to be carbon neutral in its electricity usage by the end of 2020.

Chetan Immidi is the convenor of Fossil Free UNSW.

Share
Previous True Love on the Bankstown Line
Next What Are We Marching For?