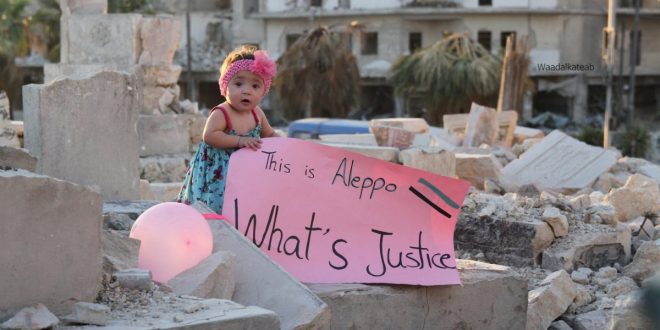 After watching For Sama, I could not stop thinking about the depressing and cruel reality of war. For days afterwards, I struggled to find words that could describe the emotional imprint it left on me, realising just how ignorant I had been to the events that changed the very heart of Syria forever

For Sama is a deeply moving documentary about the war in Syria, directed by Waad Al-Kateab and Edward Watts. It is an emotional film that offers a confronting and raw depiction of the Battle of Aleppo during the Syrian Civil War. Filmed and directed by Waad Al-Kateab, this is the story of Al-Kateab’s life in Aleppo, as she documents her fight for survival in a city ravaged by constant bombing. Al-Kateab originally used her camera phone to film the uprising as a record for her baby daughter Sama, as the film’s title suggests.

The documentary does an excellent job at commenting on the unpredictable nature of war, as it places scenes of love, laughter, and excitement side by side with scenes of death and destruction. The film is confronting, shocking the viewer with graphic scenes of death and injury, with a mass grave being displayed in the first 10 minutes. In this sense, For Sama is extremely difficult to watch at times due to the confronting and emotional nature of the subject matter. However, I do believe this confronting content is essential to those wanting to understand the struggles and constant fear faced by those who have experienced the Syrian Civil War.

For Sama is one of the most moving documentaries about war I have ever seen because it focuses on the many innocent children that are harmed by war. As we get to know Al-Kateab and Sama, we understand and sympathise Al-Kateab’s constant anxiety that harm may come to her daughter. This focus on innocent children and victims made For Sama extremely powerful and unlike other war films I have seen.

The film initially had me questioning why Al-Kateab did not leave Aleppo with her husband and Sama. However, the film does an effective job of sympathising with Syrians like Al-Kateab, by making audiences like us understand why they wouldn’t want to abandon their home. The deep connections that the Syrian people have with their home are essential to understanding one of the most tragic ultimatums of war: forcefully leaving or staying and possibly dying.

As is to be expected from a movie shot on whatever camera Al-Kateab could get her hands on, the video quality is poor at most times. At moments, the images are not very sharp and are often shaky, although this does not take away from the viewing experience, but enhances the sense of authenticity. The score and sound effects are basic, with a minimal use of sombre music, and the most important use of sound being the loud bangs, screaming, and crying from the Al-Kateab’s recordings of the war-torn city. I found this to be fitting and true to the documentary’s purpose in portraying the city, and Al-Kateab’s actual life. For Sama is narrated in Arabic with English subtitles at the bottom of the screen, making the story more authentic.

One of the most impactful moments of the film is when Al-Kateab, in a voiceover, addresses Sama, telling her baby, “Your only crime is that your mum’s a journalist and your dad’s a doctor”. This moment was heartbreaking for me, as it made me realise that children really have nothing to do with war, yet they often suffer the most. Having a younger sister and cousins, this resonated with me as I automatically imagined the anger and despair I would feel if they were in that situation.

For Sama delivers a raw and unmatched portrayal of the grievances of warfare, and is highly recommended. It made me realise that we young people, as the future leaders of the world, need to educate ourselves on the extent of the injustice in war-torn countries like Syria, so we can help make a change.

Previous Low Tech Lecturers
Next Memoirs of an Expat Childhood