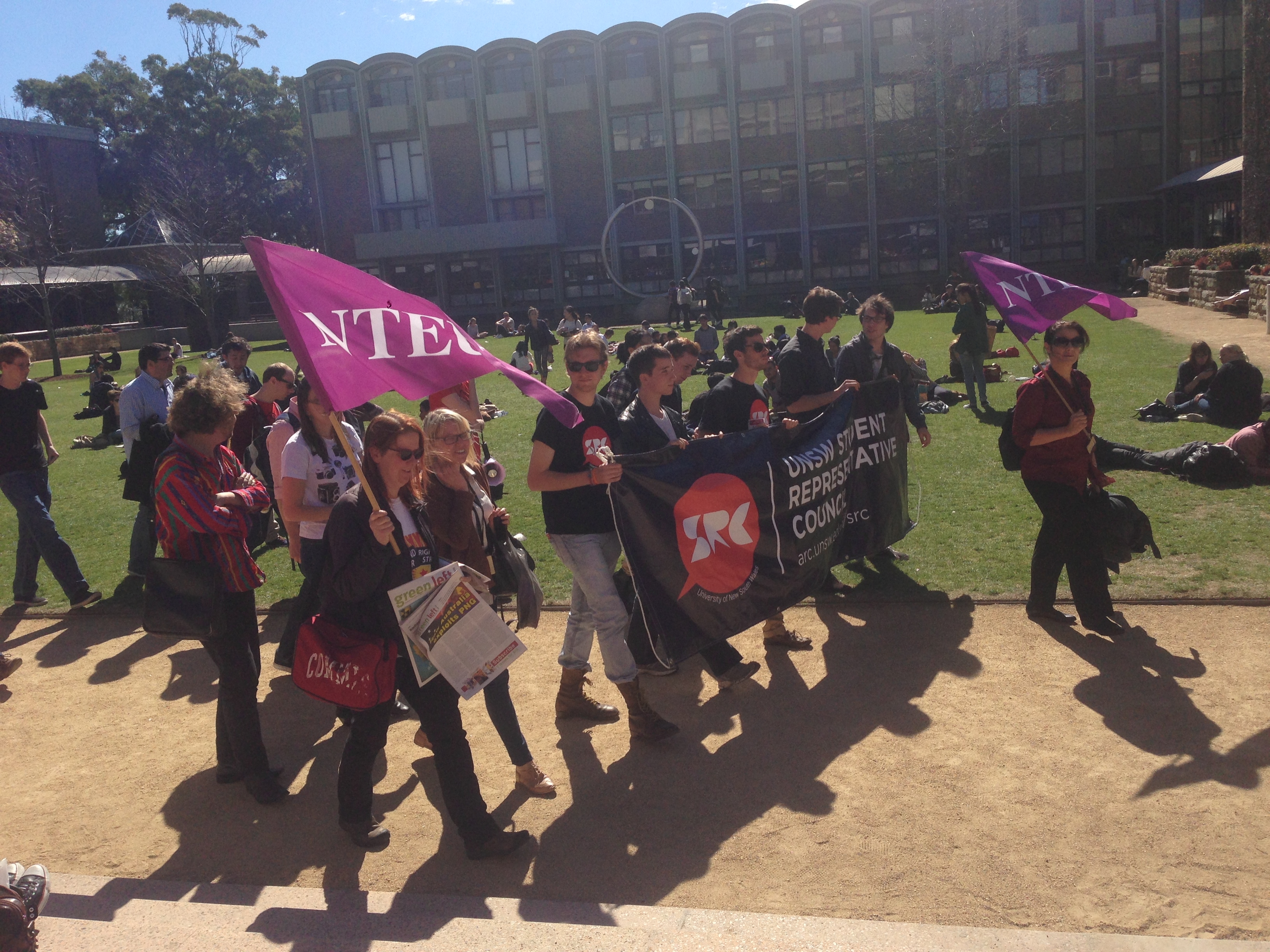 Just two weeks after the Faculty of Arts and Social Sciences (FASS) announced up to 35 job cuts in a Workplace Change Proposal, the faculty has now announced cuts of this number will not be necessary.

Whilst a smaller number of staff members will need to take redundancy, students and staff in the faculty have expressed anger in the latest announcement, one staff member labeling it a ‘quite remarkable incident’ at the recent Faculty meeting.

Professor James Donald, Dean of the Faculty of Arts and Social Sciences issued staff with a new revised Workplace Change Proposal that outlined the original budget shortfall was not an accurate prediction.

The revised Workplace Change Proposal states:
“University budget forecasts for the whole of 2013 predicted a revenue shortfall of about $4.5m for the Faculty of Arts & Social Sciences. As a result of actual student enrolments for Semester 2, that figure has been revised downwards.”

The FASS Faculty meeting held in the Sir John Clancy Auditorium at UNSW at midday on the 14 August was a chance for the Dean and Iian Martin, the Deputy Vice Chancellor, to explain the revised workplace changes to the faculty and respond to any staff concerns or questions.

Both the Student Representative Council (SRC) and the National Tertiary Education Union (NTEU) attended the meeting in protest of the cuts.

At the meeting many members of staff expressed anxiety at the current changes in the faculty, in particular how quick they seemed to happen, the impact on staff morale and also what it meant for the future of the faculty.

Dr Sarah Gregson, UNSW branch President for the NTEU, attended the Faculty meeting, echoing the concerns of many of the staff there. She says that staff continue are unhappy with the cuts, even though they are less severe.

“I think it [lack of staff support for cuts] is because the University budgets are so lacking in transparency. The staff doesn’t believe the numbers, especially when a $4.5m budget shortfall is announced and then a week later change their minds. It’s the jerking around that makes it appear they [FASS management] are lacking in a long-term plan,” said Dr Gregson.

The Dean acknowledged the difficulty he experienced dealing with the changing predictions and budget outlook.

“I felt I had been put in the position of misleading the faculty. I was also angry for putting colleagues through a period of anxiety and disruption on the basis of advice that, though issued in good faith, turned out to be wrong,” he said.

Professor Donald made it very clear that although the cuts were not going to be as severe as originally thought, the ATAR cut-off of 80, which will be introduced in 2014, is still a contributing factor to FASS downsizing, so the option for voluntary redundancy is still open.

“There were two aspects to the need to make some changes. One of the short term one, the forecasted shortfall in revenue for 2013 as a result of unusual student enrolment behaviour … Most of the pressure of the first has gone, but I’m not relying on any numbers until after census date,” said Professor Donald.

Professor Donald stated that there is still need for change within the faculty in order to prepare the faculty for the impact of the raised ATAR entry mark limiting student growth in the future.

“I have been fantastically impressed and quite moved by the response of the Faculty. The maturity shown in accepting that though those numbers were wrong, we still have issues to deal with and that people are coming on that journey,” said the Dean, thanking staff members for their support.

Dr Gregson expressed the toll that the process of voluntary redundancies has on staff.

“This process [voluntary redundancy] does affect morale, and even makes some people want to take voluntary redundancy because they think there is no future for them in the Faculty, that they will be constantly jerked around,” she said.

The Dean argues that the process of voluntary redundancy is unfortunately needed but can in some ways be a positive thing.

“Frankly some of the people volunteering for redundancy see this as a genuine opportunity to retire or to make a change in their lives. I think for them it’s a positive. Nobody is being pressured to volunteer who doesn’t genuinely want to, we’ve made that very clear. I think, touch wood, that everybody is going to come out a winner in the end,’ said the Professor Donald.

Not everybody agrees with the Dean’s sentiment that the process will end positively. Cat Rose, the National Queer Officer for the Union of Students, joined the SRC and NTEU protest at the August 14 meeting. Cat does not believe the revised changes and smaller number of staff cuts will make the quality of education any better.

“Despite their [FASS management] denials of this fact, there will be an increased workload on the staff and a decrease in quality of education for the students. If people retire then they should be replaced. It’s that simple. Students have already suffered enough. We don’t accept the Dean saying that it won’t affect students,” said Cat before entering the meeting.

Going so far as to say she hated studying Arts at UNSW, Cat was applauded by Faculty members and protesting students when she publicly addressed the Dean at the FASS Faculty meeting.

“I don’t think anyone believes there won’t be further cuts. All we have seen over the last few years is cuts after cuts after cuts. Class sizes have gotten completely out of hand, I went to class last semester and was told that they weren’t doing participation marks anymore because there were too many students in the class and it wasn’t a fair way to mark people if each tutor has too many students to remember [sic],” said Cat.

Dr Gregson believes that the problems that FASS have been experiencing over the past few years come down to mismanagement from the University.

“They [FASS] hired 100 people in the last five to six years with no adequate plans that suggested what would happen if the growth was not sustained. To an extent they created the shortfall themselves, putting the ATAR entry up for example. But there are broader systemic problems, University money is spent on high-priced student accommodation and not on classrooms,” she said.

The Dean acknowledges that there are some structural problems in FASS, which need to change.

“There is recognition that we do need to change the structure of our budget a bit, so that when there are peaks and troughs unexpectedly as there always will be, we actually have flexibility to deal with it without it becoming a critical issue,” said Professor Donald.

Cat simply doesn’t think FASS has dealt with the problems in a way that will not impact students.

Earlier in the day the Dean defended the changes Workplace Change Proposal, adamant the cuts would have no impact on the quality of student experience.

The final number of job losses and budget shortfall in the FASS will not be released until the process of applications for voluntary redundancies has been completed on the 23rd of August.