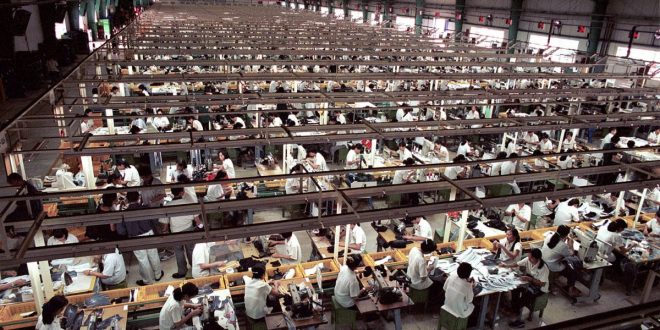 “The policemen had been armed and blockading the streets on the day of the protest.” The man with the tools handed Ishna his small screen. After scanning the vast hall for sight of her manager, she dared to take it. On its surface appeared the title of the article: ‘Australasia remembers: citizens’ backlash over their own mass drugging.’ 2193! She was only an infant.

Ishna turned back to her sewing machine and flattened the fabric into place. She had been threatened by her manager with all kinds of punishments, but this idea of being drugged sounded much more sinister. A soul without sentiment was like trousers without pockets; no substance could be stored within it. Without her consciousness, where would she store her dreams of becoming a sewing operator and owning a coloured TV? And here she was complaining about the electricity playing hooky!

The clunk clunk of the sewing machine echoed her frustration. She’d fed the material into it too fast, and the bobbin had jammed on the slogan ‘Take fast fashion off the shopping list.’ Wiping her brow on the back of her hand, she opened the machine and began to untangle the thread.

It seemed like only yesterday Elizabeth Martin had found herself standing behind the length of customary crimson ribbon, holding a pair of oversized scissors. It was as though a giant maxi claw had picked her out from the masses of hard-working women, and by some affirmative action had deposited her into the hatch labelled ‘promotion’. She had exchanged a handshake with Andrew Stilton and in return landed the title, CEO of Stilton Fashion. “The CEO.” She repeated it to herself with conviction.

“Display sales revenue since February 2202.” The chart materialised on the screen. The trendline took the shape of a tick; dipping from February to March (when factory livestreams had been established in retail outlets); then back up, in a steady upward trend.

Last time he’d seen it, Andrew had clapped his hands in glee. But to Elizabeth, the red tick mocked her attempts to tame consumerism, even after the ban on pills. A tick, she thought; just like the tick the auditor had given them for in-store documentation of factory conditions. But she showed no signs of approval.

“Nope!” Andrew smacked his hands together, grinning. “That was anti-activist day.” For that, he earned a hearty chuckle from his colleagues.

“And the day before that was women empowerment day – or was that housework appreciation day?”

“Silence, Harding!” but Andrew was doubled over with laughter.

“Let’s take a moment to remember those in the Savar building collapse.” Yet all Andrew was really remembering was Harding’s mockery of the awareness days. He composed himself.

“Ms Martin is rostered on to read the Significance Speech about this day, but seeing as we are pressed for time-”.

Elizabeth nodded, without lifting her eyes.

“-We’ll say a quick prayer, and get this over with.”

It was funny how a person could indicate one thing and think another. Many yesterdays ago, Elizabeth would have challenged him; activism, after all, was better than no activism, even if it made only a small change. But alas, what good was an extra Significance Speech anyway? They simply rendered us school children, zoning out of the same principal’s speech in a perpetual state of oblivious awareness, accepting denial of our social responsibility.

“Ishna, I can feel my heartbeat in my fingers,” Tahni whined. Ishna sat on the concrete floor next to her sister, who, aged six, was finally old enough to start work. “Hush, Tahni, my fingers are hurting too. Allah does not burden a soul more than it can bear.” She repeated the quote in a rhythm that accompanied the throbbing in her back, drowning herself out of consciousness with its relentless repetition.

Elizabeth Martin averted her eyes from the screen, as Mana raised his belt.

The flogging was silent.

Suddenly Andrew was beside her, smirking.

“Would you take her place?”

Elizabeth paused. The realisation was crushing.

It was like a balance sheet; the cost of their empathy just couldn’t be financed without a deficit –without borrowing another life. That was a sacrifice too great. She no longer had the pills to blame for the empathy block she felt. The cruelty was inside her. It seeped through the fabric of society, spoiling its stitches, wearing it thin.

Andrew sighed. “That’s what I thought.”

And the boardroom prayer seeped under the door.

Share
Previous What Women Lose: On the Attorney General’s Historical Rape Allegation
Next Trans Day of Visibility is for Radical Activism, Liberation, and Unity – Not Empty Corporate Platitudes