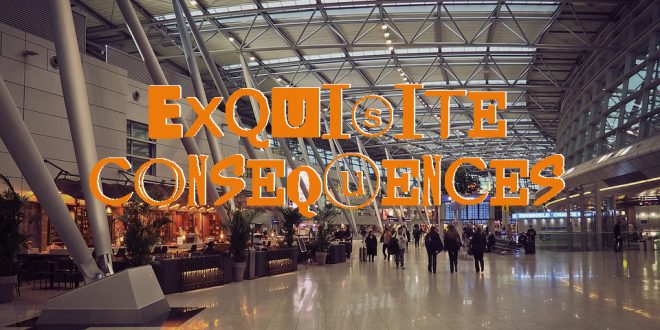 Exquisite Consequences #4: The Beginning of Our Forever

Exquisite Consequences is a fortnightly game of literary tag, where the only rule is that each piece must begin with the last line of the work preceding it.

I’ll see you next Summer. I’ll think of you from time to time.

As the lies flooded my mind I signed in defeat. I would not see you. I will think of you; always at first, but as time erodes these feelings, the thoughts would wear too.

I love you. I will have loved you. But will we be in love?

The walk to customs is filled with this enigma, of loving and losing. I haul the suitcase with too much force and I fight the tears in my eyes. I was not weak and I was not foolish. Life had carved me to be a realist and yet these emotions danced around my sanity, mocking me. Love insulted the constitute I grew up on. I was rational. I did not get attached easily and I definitely did not condone pining.

Yet as I walked on down the brightly lit and all too busy terminal and I could not help but reminisce. Why had you kissed me that night? Do I blame the moon for its ungodly glow and lustre? Do I blame the pheromones? Or do I blame our youth? I blame us. I blame the smiles I gave and the giggles that ensued. I blame the second guessing and the lingering gazes and the soft brush of hands. I blame the naivety with which I kissed you back. Tender and soft.

I stand behind an obscenely tall man in an endless cue for customs. The top of his spotless head gleams back at me, littered with tiny swat droplets. That scalp is brighter than my future. I giggle to myself as Austin’s quips flood my mind. He had the mysterious ability to always make me smile. He was the only one who could really make me feel any sort of way and perhaps that’s why I had relinquished all my inhibitions for once.

I tap my passport against my thigh, agitated and restless. A sort of urgency had slowly crept up on me even though I had hours before my flight was due to depart. Breathe in and out. In and out. I had learnt many things over the summer but despite what Dr. Stevens the instructor had hoped, breathing and meditation were not one of them. I was a panicky person; it’s not that I enjoyed the constant heart-racing shakiness that came with anxiety, it was more a helpless symbiosis. It didn’t hurt to care a little more even if it meant losing a few sleeps.

I had learned to calm down though. Not in one of the empirically founded and renowned ways Dr. Stevens had tried to swear me by. It had been in those moments with Austin. Wrapped up in his arms, heart pounding uncontrollably, had my endocrine system going crazy. I had felt a destructive craziness and a serenity that nestled in a thin balance. I had found love.

A lady sidles up to the bald man in front of me. She seems young and vibrant, exuding a silent confidence I admired and envied. He reaches for her waist as she rests her head on his shoulders. They fit together like two pieces of a puzzle.

“Sorry, there was such a long cue for the bathroom,” she says in a polished English accent. Her voice was even classier than her demeanour. I was equally impressed and surprised. I re-examined the man’s cargo shorts and Metallica t-shirt. Was he wearing this out of irony? Was she immune to their obvious disparity? Did it not matter?

There was always the old lie, that opposites attract. While it may have worked for magnets, humans were a little more complicated. Reality was not as kind to us. You couldn’t happen upon a strange, elusive boy over the summer and hold onto it forever. There was no forever to that. It didn’t matter how many times he had promised to come back in the solace dark. It didn’t matter how matter times you said ‘I love you’ or how tightly you held his hand. You weren’t holding onto it forever… and that was your reality.

A shameful sadness floods me. The urgency creeps back lingering longer and stronger. I needed to see Austin again…

I spin around, pushing past angry families in the queue, realising I seem like a deranged lunatic. To their credit, I am more or less; deranged most certainly and lunacy is relative. The frantic urgency frenzies me as I sprint across the airport. Sometimes in life we had to be a little impulsive because sometimes that’s all that matters.

If you had asked me a few months ago I would have constructed a strong five-point argument to explain exactly why airport chase scenes were an impractical cliché. Given the sheer number of people within an airport, it was a statistical anomaly that everyone be reunited in a timely fashion. Yet here I was, hoping to be that statistical anomaly, heart on my sleeves, frantically scanning every face for the familiar hazel eyes and freckled nose. For the warmth and comfort that had me spellbound to this day. For my forever.

I continue down the airport as I try to reason with myself. There was a dawning realisation that I may have run all this way in vain, only to be met with humiliation and defeat. He really was gone and summer really was over. And I had become my worst fear. I was a fool. I clench my jaw tight. Do not cry. Don’t you dare admit defeat, Sam. I am breathless and hopeless. I am weak and forgotten.

As two large arms envelop me from behind I let a tear release. I am loved.