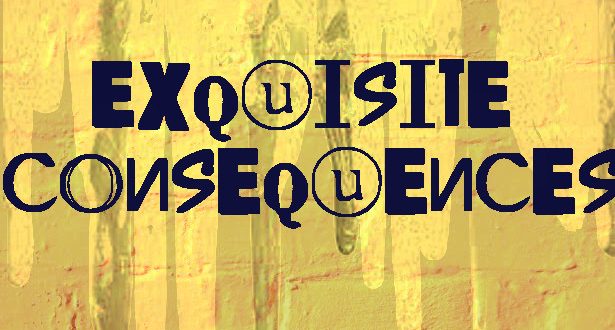 Exquisite Consequences #3: This Summer and All the Summers After

Exquisite Consequences is a fortnightly game of literary tag, where the only rule is that each piece must begin with the last line of the work preceding it.

This Summer and All the Summers After
by Michelle Huynh

Nana, I’m just calling you to say that we’re on the road back home now, and I hope that it’s okay but I’ll be dancing the whole way.

I tucked the phone into the small compartment of our car. Outside, the wide roads and grassy plains were dowsed in golden hues, embers that spilled from the sun. Much like when you marvel at the evanescence of watercolour paint, dripping from a source of intense hue until it fades into the whites of its blank canvas.

My idea of a summer trip back home had seldom ever included the monotonous chores of family gatherings around the kitchen table or the hustles of aunts and mother of aunts clacking their way across tiled floors. Instead, I had imagined that this year I would be finally free from the shackles of my own guilt because of bright-eyed Mandy with her cherubim cheeks.

But no sooner had I planned the inventory with Mark, I received a voicemail on the phone line. Its static noise spat out crackled words like the crushing pops of eggshells on a soft-boiled egg. It was Nana. Her insistent demands for me to adhere to tradition left no space for anyone to revolt against her, so I sighed, rubbed my eyes and tried to swallow the rising disappointment. In an attempt to make me feel better, Mark settled his ballpoint by the notebook and came to me, rubbing my shoulders. Did I fancy a drink? No. Should we continue this later? I want to finish this off.

He circled back to his chair across the living room table and from there, we made sure to not change too much of our holiday plans – mainly, I thought, to make me feel not as entirely useless and limp as a ragdoll when it came to making decisions to govern my own life, and my family’s.

The suburb was a relatively quiet area, stretches of garden and land plots fenced in by wiry metal gates so low, that if a thief was to ever trespass on property, they could simply step over it. The area has underwent an evolution of course, so much so that the all stories of small syringes littered near the parks or drugged up men that sprawled their bodies on the sidewalk with empty booze bottles, all became some sort of folklore legend. Now, if you cross the road from the small playground area and continue South, you would eventually come to the front yards of a house on the corner of an intersection. The garden was washed over with the sweet aroma of rosebuds, bursting their heads towards the sky. Lavender hydrangeas clustered shyly behind and dark green vines curled their tendrils over the fence. When I held Mandy up close, she had tried to grasp hold of the petals that swayed delicately on their thin stalks. The owner, with brown, patchy gloves wrapped them around the stalk of a hydrangea, plucked it from it’s soil and handed to Mandy. I said my thanks, Mark offered a small smile and we went on.

I was only six when Nana sat on the edge of my mattress one night and told me Mum and Dad weren’t coming back. I had no idea what that meant, only knew that by the next day and all the days after, I never got to sit on my father’s lap or play airplane, where mother would lie on her back on the bed, hold me by my hands to plant her feet on my belly and lift me up into the air. I didn’t cry because I wasn’t sure what I should be crying about, and only watched Nana comb back my unruly baby hair wisps with her quivering bony fingers, swiping her nostrils with a crumpled tissue. I felt almost cruel for wanting her to go away so I could get some sleep. Looking back now, perhaps I had wanted to push her away for reasons that an adult would want to push away past trauma.

The next day when I toddled into the kitchen with my slip-on pajamas, Nana had said, stone-faced cold, that I was to not leave a smudge of rice left in the bowl. I was more comfortable with this sort of feigned normalcy.

It was no different now, coming in through the door as I watched Nana waddle over in her slippers, saying, “Sit. Dinner’s ready in ten.” She threw a pursed smile at Mark, as charitable as someone that would chuck a few pitiful coins in the buckets of those around her. I did my best to swallow the balled up saliva scratching at my throat.

We followed her into the dining room and were met with a cheerful symposium of fish gutted in soy, bean sprouts in baskets, duck roasts in slices and a large boiling hot pot planted in the middle. I hugged my cousins, passed Mandy over onto Pop’s lap and watched Mark clink a few beers with a few other relatives.

“So we’re thinking of painting the walls a pale yellow in Mandy’s room,” I said.

Nana picked at the garlic on her dish, chopsticks swerving in maneuvered precision. “Paint it baby blue. It’s relaxing.”

I replied, “Mark and I have settled on pale yellow.” I thought it would be the end of it and yet, Nana glanced from under her thinning eyelashes and said that yellow reminded her of bird shit. I wanted to do it then, tell her that it didn’t matter what anything reminded her about, that it was Mandy’s room and even then, yellow did not remind anyone of bird shit. Instead, Mark held my hand in his and chuckled. I looked at Nana, old and hunched over the dinner table from the passing of years settling on her shoulders. I watched her struggle to reach a dish on the table, of having to stretch her armpits like a languid cat except rolls of wrinkles were sagging over everywhere. I was awashed with an ambivalent mix of melancholy, pity, but most of all, a baby-blue calm.

“Actually, Mark and I have started on painting the walls,” I say, loosening my grip and smiled at Mark.

“That was big of you,” he told me in the car on the way home after spending a week there. Mandy was asleep in the back. Her soft little snores made everything feel like home.

“What was?” I asked, grinning. I knew what he meant but I still liked to hear that I was a great person once in a while.

“Everything,” he said, then added, “this summer”.

I nodded, taking out my phone. I already said goodbye, but I wanted to practice being big – whatever that meant.

Nana, I’m just calling you to say that we’re on the road back home now, and I hope that it’s okay but I’ll be dancing the whole way. (okay, but you can still be big with a little bit of sarcasm, so long as you end it on a nicer note to cancel the sarcasm out).

I’ll see you next Summer. I’ll think of you from time to time.