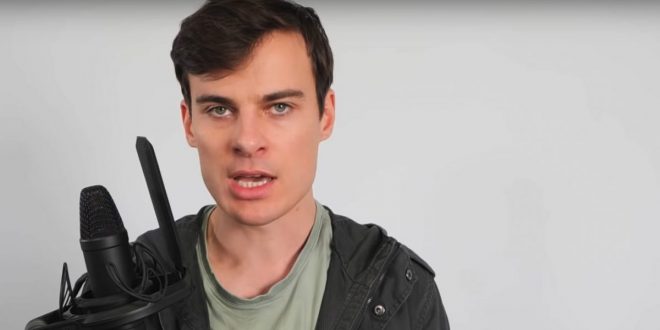 Explainer: Who is Friendlyjordies and why is he in the news?

Over the past few days, UNSW alumnus, Jordan Shanks (also known as Friendlyjordies) has been trending in stories about arrest, abuse of police powers, and questions about the future of journalism. Confused? Emma provides an explainer on the situation.

Kristo Langker, a producer for YouTuber and political commentator Friendlyjordies, has been arrested from his family home, following a complaint from NSW Deputy Premier John Barilaro.

This saga began with a defamation lawsuit launched by the Deputy Premier against Shanks, which may lead you to ask…

Who is Friendlyjordies, and why is our Deputy Premier suing a YouTuber?

Friendlyjordies, or Jordan Shanks, is a YouTuber and political commentator who frequently uses controversial humour and satire to embellish his coverage of alleged political misconduct and government corruption.

Shanks is no stranger to lawsuits, having faced the threat of a defamation lawsuit from Clive Palmer following a previous video where he called Palmer a slew of insults, while highlighting his alleged political misconduct. Shanks appears to revel in this sort of response, using such legal action as a signal to further taunt those who challenge him. He is similarly confrontational to other journalists who call him out.

Friendlyjordies has published a series of semi-satirical videos on his Youtube channel accusing Barilaro of corruption, whilst taunting and making fun of the deputy premier. His jokes often have racial undertones; for example, Shanks frequently refers to Mario Kart characters and spaghetti in his jabs at Barilaro, due to the deputy premier’s Italian heritage. The deputy premier has accused Shanks of being excessively racist and defamatory.

Allegations outlined in Shanks’ videos accuse Barilaro of debt trapping a community clubhouse in Queanbeyan, forcing it to shut down, degrading the environment for his own interests by introducing a brumby protection bill following personal donations and of numerous instances of pork barreling, which is the use of government funds for projects designed purely to please voters or legislators and win votes. Overall, Shanks criticises Barilaro for being corrupt and self-interested.

Throughout the series of videos, Shanks has carried out a range of stunts in his attempts to uncover political misconduct and shady behaviour. For example, he rented out John Barilaro’s AirBnB estate and filmed a video in it, pondering how Barilaro could afford such an extravagant property on a “state minister’s salary” while discussing a range of Barilaro’s alleged corrupt dealings. He also confronted Barilaro in person at a Macquarie University social event (more on that later). However, he maintains in his most recent video that all of these outrageous stunts have remained within the bounds of the law.

The defamation suit, published here on Shanks’ Facebook page, alleges Shanks of engaging in a “racist and defamatory” campaign against Barilaro. It cites numerous insults said by Shanks, as well as accusations of corruption outlined in the series of YouTube videos.

Why was Kristo Langker arrested?

Shanks’ producer Kristo Langker, 21, was arrested on the 4thJune, and charged with two counts of stalking or intimidation with intent to cause fear of physical or mental harm.

Video footage of the arrest shows plain-clothed officers ushering Langker out of his house. When Langker attempts to hand his phone to his mother, who is filming, a scuffle breaks out. The footage goes dark and screams can be heard: “Oh my god- What are you doing- What the ***,” followed by the officer yelling “They’re trying to give away evidence, and run away with it; Don’t run off with evidence, okay?”

Once the scuffle subsides, Langker is seen pinned to the ground by a plainclothes officer. “This is not Australia,” his father says.

Langker’s mother was knocked over in the scuffle, and can be heard speaking to an officer; “You hurt a 51-year-old woman. You knocked me over.” The video ends at the unmarked police car, in which Langker was presumably driven away.

Langker’s bail conditions stipulate that he cannot contact or approach Barilaro, and go as far as stating that he cannot possess images or caricatures of the Deputy Premier, nor comment on the personal appearance or behaviour of Mr Barilaro. Langker’s lawyers have criticised these conditions as being overly restrictive. He will appear in court on June 24.

It is important to note that Langker was not arrested by a regular police unit; but by the Counter Terrorism and Special Tactics Command Fixation Persons Unit. This is a unit was created after the 2014 Lindt café siege, and is designed to deal with “people who aren’t classified as terrorists but are so obsessed about issues, ideals or individuals, they are plotting acts of violence,” as stated by police commissioner Mick Fuller.

Langker’s lawyers condemn the use of the unit for his arrest, stating on Twitter ,“It is shocking to us to see these counter-terrorism powers now being used against investigative journalism and YouTube comedians.”

Now, you may ask; what constitutes two counts of ‘stalking or intimidation with intent to cause fear of physical or mental harm?’

The first incident relates to a stunt orchestrated for Shanks’ YouTube channel.

The Deputy Premier was at a small but public Macquarie University event, ‘Social drinks with Barilaro.’ Seeing this as an opportunity to confront Barilaro and taunt him further, Shanks and his team decided to crash the event.

This is relevant to the arrest since Langker was also present, seen in the video talking loudly to security saying “This is a public event! John, I’ve got some documents you might want to see.” An unidentified. aggravated man is seen shoving him as Langker attempts to talk to the premier, saying “get the *** out, […] you’re not ruining our bloody event so you can do your YouTube moment.” Eventually, Langker too leaves the event, ushered out by security.

John Barilaro is seen in the video, sipping a beer and largely trying to ignore the spectacle.

This incident is the basis of the first count of Langker’s charges.

Langker, allegedly walking from a university class to his car, spots Barilaro. He approaches him and attempts to hand him some legal documents, whilst filming. In the video, he is heard saying “Hey, John […], I’ve got something for you. John, I’ve got a lawsuit, you’re suing my boss.” Barilaro ignores him and gets in his car. Langker is heard calling Barilaro’s name a few more times as the car pulls away, and the video ends.

Langker’s lawyers maintain that the video of the incident “does not appear to accord with the police facts.” There is a clear mismatch in dialogue between the two accounts, to say the least; the police report states that Langker called Barilaro ‘corrupt’ during this interaction, whilst nothing of the sort can be heard in the video of the incident.

To reiterate, the charges posed against Langker were ‘stalking or intimidation with intent to cause fear of physical or mental harm.’

What does this mean for the future of journalism?

Whether or not you like Friendlyjordies, or agree with his style of political commentary, this case has implications for the free speech of any journalist attempting to call out corruption.

The NSW Police Force has stated that “the behaviour of [Langker], Friendlyjordies and the public reach of the Friendlyjordies media platform has caused the victim to be constantly anxious and in fear.” As such, it appears that Langker was not arrested for being a direct threat to Barilaro, but for being a part of the team that put a spotlight on him.

The use of a counter-terrorism unit to arrest Langker appears to be nothing more than an abuse of power. As said by NSW State MP Helen Dalton in a media release,  “A special unit established to tackle extremists should not be arresting a YouTube comedian.” She continues, “There are many journalists across Australia who’ll be in trouble if this is grounds for arrest.”