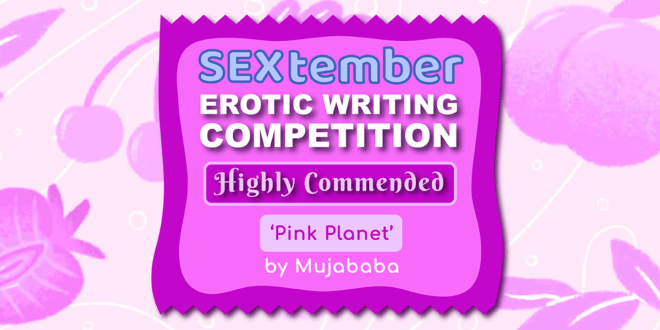 It feels almost impossible for Jane to plot her escape under the alien eye of Hanine, but she couldn’t just accept her fate and be taken back to the alien leader to be tortured and dissected for hunting Hanine’s species. Before she could talk herself out of it, she jumps to her feet with one swift movement and begins running along the planet’s foreign terrain.

She sees a flowing pink river, and realises it might be enough to lose Hanine if she jumps in, without overthinking she leaps into the river. On the bright side she can’t hear Hanine’s fast and heavy footsteps anymore, on the flip side though her hands are still bound and the river is vicious in its current. She’s carried along the river, she holds her breath for as long as she can to lose Hanine, but the current is too strong.

Just as she’s about to lose consciousness, she’s grabbed by the arm and thrown out of the water. She coughs out some of the pink liquid, while Hanine hovers over her. After confirming Jane is unharmed, Hanine throws her over her shoulder and leaps over the river. She fails to escape for another day.

Hanine puts her down, and binds her legs as well this time before setting up camp. While setting up, Hanine senses Janes quivering, her clothes still soaking wet and torn up from the river. Hanine looks at her for a while, before retrieving a blade from her satchel. Jane was fearless but she had to admit, Hanine exhibited such power that she’d feared the alien’s hatred for her would at some point overpower her loyalty to the cause. ‘Perhaps she’d had enough of trying to keep me alive, perhaps she’d decided to report back that I simply didn’t make it.’ She kneels down over Jane. Jane resists the urge to flinch away, instead she doesn’t break eye contact. Hanine brings the blade down to her chest, presses it against her skin before slowly dragging it down, cutting the material of her tattered shirt. Hanine continues to slowly cut and remove Jane’s clothing. Jane notices some changes in her photon aura that she’d never seen before. Hanine hesitates before cutting her bra, she looks up at Jane’s eyes. She must have remembered the sight of Jane killing her friends because the softness that Hanine had shown up until now fell away, she cut away at her bra exposing her chest. Jane’s arms snap up to cover herself. Hanine shakes off her emotions and gets up to retrieve something from her satchel.

Jane catches her breath, her thoughts were racing and her heart felt like it was going to jump out of her chest. What was she feeling? She recalled Hanines soft, strong hands on her skin but returns to reality when Hanine arrives back with a cloak. She kneels again to her position atop Jane, pressing down on her lower body as she cuts the rope that bound her hands. Jane reaches for the cloak but before she gets close Hanine has reflexively grabs her hands and pins them down above her head. Jane gasps and they share a look as Hanine loosens her grip.

“I was just going to grab the cloak.” Jane breathes. The tension was palpable. The heat coming off their bodies had dried off what remained of the river on Jane’s body. She began to soak in a different way. Jane closes her eyes to gather her thoughts. She feels Hanines breath hot against her lips, still pinned down Hanine slowly lowers herself, inching closer.

Before she can convince herself not to, Jane closes the gap and makes contact with Hanine’s lips. Hanine stops holding back, she presses up against Jane and bites her bottom lip, drawing blood. Sending electricity pulsing through her body.

Jane squeezes her thighs together as her crotch begins to throb with lust and pleasure. She’s never been so wet before. Noticing her movement, Hanine pulls Jane to her feet. She makes her way down Jane’s body, touching and squeezing whatever she liked before slashing away the rope that bound her feet. A voice in her head told Jane to run but she was entranced. This

creature was her enemy, she couldn’t make sense of the attraction she felt. Nothing made sense anymore. The only thing she knew was that she was done running. Jane pushes Hanine back to the ground and tears off the material that clothed her exquisite form. Hanine let her explore the scars on her leaf-like skin, Jane kisses each of them before locking lips around a sweet nipple. Her skin tasted like honey. Hanine vibrates with pleasure but pulls Jane to the ground and resumes the position where she’s on top.

Jane starts to feel a strong tingling and warm sensation between her legs. She squirms around but struggles to fully push away Hanine. With her knees bent and still lying there, her legs part ways allowing the inner parts of her thighs to slowly stroke up and down Hanine’s refined waist. Hanine arches her back, exposing her chiseled figure and lowers her head at an angle perfect for consuming the side of her neck. Her tongue widens to lick her and curls back into her mouth around before her soft, wetted lips purses onto the human’s perspiring skin. Rendered speechless and her thoughts scrambled, Jane struggles to fight back a faint whimper. Jane’s legs suddenly stop squirming in shyness and instead latch onto Hanine’s waist with more vigour to pull her in. She wants it and she wants it bad. Hanine responds to her eagerness and rubs onto her, letting her legs now wrap around her ass. A mutual and sensual energy fills the air. The tip of her tongue slithers down her neck and down her bare chest before circling the rims of her voluptuous nipples. She lets out a shameless moan. Jane flings her body forward to passionately interlock tongues with the creature but is forcefully pushed back down by the neck. “Not so fast now.” Prolonging their gaze, her mouth travels downwards leeching onto every part of her body and draining every pore. Hanine’s gaze is redirected to Jane’s soaking underwear, a dainty piece of fabric puckering onto the ridges and grooves of her vulva. Tempted as she is for a taste of Jane, she uses her teeth to rip her underwear off and reveal her pink p****. Jane writhes with intense pleasure as Hanine eats her out of this world.