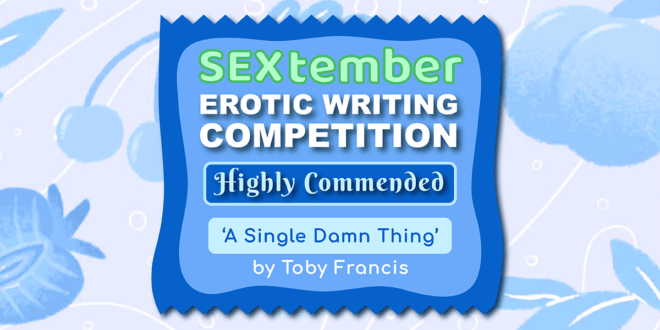 He’d spent his twenties fucking everyone, from enemies to lovers, and now he was a doughy husk padding wet feet along a pavement, homeward after slipping inside someone found waiting in a room in a place where people go to do that sort of thing. She was beside him, one cigarette into their three-smoke walk home, and they said nothing. They’d known each other since high school, friends who’d started fucking once their divorces were inevitable, one night when they’d had too many strawberries soaked in marsala, one night after two bottles of wine and a boozy pasta sauce. The divorces were inevitable prior to the rutting in the kitchen, not because of it, they told themselves.

They never made a thing of it, not a single damn thing, they’d just found a few months in which to press themselves together and lay their hands upon the softest pieces they could find, sliding skin and finger into crevice and onto shaft, leaving them both soaked, before they’d open up their chests to talk about how they’d both die alone. Even then, during nights of comfortable sex and fluid, they knew there was nothing. Their friendship unchanged, their bodies now to be used by one another.

It had all been easy and wanted, that first time, she had moved her hand behind his back, finding his hole while he pressed inside her, and his body moved him backward to her roaming, wanting it, wanting her, to touch it. Never before had that been how it was. He wouldn’t even let his wife see him wash his arsehole when they showered, let alone have her touch it, let alone have her tongue run along it while he touched himself, like she had done that first time. His entire body was a gift he’d spent decades wrapping up for her to ruin.

It had been easy for them, but they had not made a thing of it. The intimate transaction was to remain transactional; it was not to bleed out into the kindness of their friendship, into their care for each other. They knew without words that they wouldn’t allow it to become something and so it never did.

For months they kept at it. Sex in all rooms, in all ways, with all words, until eventually it was not what it was at the start. It would peter out, they knew, and soon. And so it was to their benefit that they became a couple who went to a place they knew of. In the city, where sex was open, and free, where you needed to be a couple to get in. That place where people find other people and gave themselves over with a pact not to tell.

And so they went, that first night he watched her take a man in her mouth, in the front room where people fondled among champagne and beer, and he thought the man confident given his size. But still she had taken him in her mouth and enjoyed the watching, the man’s wife watching her husband with a woman she didn’t know. He was surprised when the wife asked if she could touch him, and he said yes because he felt it fair. She opened his jeans and felt him soft and frightened, the state he would remain, but she felt him while she watched her husband until her boredom took over and she found some woman in another room.

That night, two years ago, he left, out of fear, having fucked no-one he wished to, but she left having got what she wanted. Now, his feet bare from a need to feel the rain-soaked asphalt after yet another night in the heaving home of that place, he found he felt like then. He found she’d got what she wanted while he had wanted her.

She finished her third cigarette and they split at the corner of Williams and Victoria, his wet feet walking him back to the place with the kitchen where it had all begun, and he would not make a thing of it, not a single damn thing.