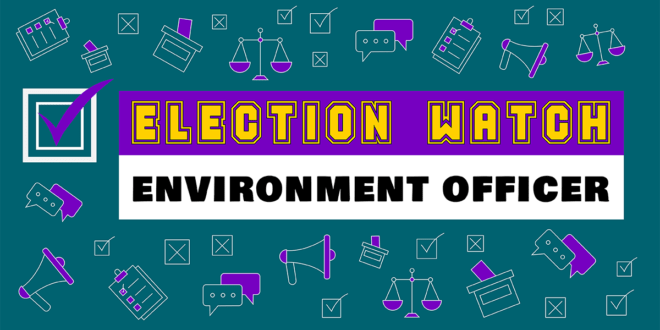 Environment Officer at the 2021 SRC Elections: meet your candidates

From raging wildfires to the deforestation of the Amazon and the tipping point of the climate crisis drawing near, environmental concerns have emerged at the forefront of discourse this year. The 2021 Environment Officer candidates are committed to not only raising awareness about such issues but making a tangible, long term impact.

Tharunka spoke to the two candidates running for Environment Officer this year:

Get to know your nominees

I think the SRC should be a fighting activist body. Right now, if you look at the state of the world, you can see the urgent need for a fight back in society. Whether it’s the Liberal opening plan, the climate crisis barrelling down upon us as we speak or the range of social injustices that take place in our society. Student unions have a history of fighting back against injustice and I think that’s what the SRC should be committed to doing at UNSW.

One of the big questions is the need for a fighting climate activist movement on the streets that actually challenges the priorities of the Liberal Government and Labour, both of whom having fully committed themselves to backing up the fossil fuel industry. The only way we stand a chance is actually mobilising a confrontational fight back. I think organising more climate protests, taking on the priorities of the government, building a fighting climate movement, that’s the kind of thing we need to see.

And then understanding that UNSW is no innocent party when it comes to being part of the planet destroying activities. There’s plenty of stuff to do to actually put some pressure on the university to stop contributing to the climate crisis.

I have been involved with the SRC before and I’ve been an activist for a few years now at UNSW. In my first year as an education activist, I was part of Cancel Trimesters campaign at UNSW in 2019 where we waged a fight against the university’s decision to push ahead with the trimester system. I was Education Officer in 2020 and that was an important year because again, UNSW pushing ahead with massive job cuts as well as the government’s proposal to hike up university fees, basically doubling the cost of arts degrees. I was part of organising protests against these issues at UNSW and across Sydney.

Throughout that I’ve been involved in organising a whole bunch of climate protests. Every climate strike that’s happened I’ve helped organise. The ticket I’m part of, Left Action, is full of activists and fighters who don’t just want to get into the SRC for a resume boost but to be a part of fighting to challenge the priorities of the rich and powerful.

What are the biggest issues facing students in 2021?

I think one of the biggest issues facing us at all at the moment is the pandemic. It’s pretty clear to all right now that the Liberals are pushing ahead with a plan that is going to let thousands of people die, especially concentrated in working class, small, vulnerable communities.

As well as that I think the number one issue that students care about today, according to polling, is climate change and the fact that our planet that we live on is being destroyed for the sake of a handful of fossil fuel companies to continue making profits.

Those issues are really big for students, and even racism, fights against social injustice, LGBTI rights. There are a whole bunch of big questions students care about and I think sadly the SRC hasn’t always been the most active in fighting around these questions, largely because the people who have occupied the major positions in the SRC for the last few years have been firmly wedded to the Labour Party. So, not wanting to rock the boat too much, not wanting to challenge the priorities of university management or the government. That’s why we need to see some people who are fighters in the SRC next year.

I just really want to help students as much as possible. I’m only a first year and I didn’t even know there was an SRC until recently. I just like having that opportunity to speak to students and get their input, that would be amazing. As part of the Spice Up team, our three main goals are to have a reduction in the students’ amenities fee, especially if you’re an online student and you’re not even on campus and utilising those fees. We also want to get better club funding and societies. I’ve been a part of a lot of societies and honestly, they’re the best part of university and you get so many connections. It’s really upsetting that right now in COVID we can’t really get into that as much. This is also something we want to help with next year once we get back on campus; to help societies and clubs and rejuvenate the university, get a bit more socialising out there.

I would also like to help with more sustainable initiatives. I know the university has been working towards that with things like plastic free dining but even just stretching out into more areas such as second-hand clothing swap initiatives to help with fast fashion and overconsumption. Also have events such as industry nights to have more communication with environmental companies or even ResMed for humanitarian areas. Activism is also important and kind of correlated with all the environmental impacts.

I would also want to diverge away from fossil fuels. I know the university has been pretty proactive in terms of getting the university pretty solar powered. This kind of links to having more sustainable initiatives to help that and then communicating with other students, societies or programs like the environmental collective and any of the renewable engineering societies.

I’d also want to help educate students in terms of being more mindful in the way they act every day and in their daily lives do their little part to help with the environment.

Societies is the extent of what I’ve been involved in. I’ve been in the peer mentoring program and a lot of societies such as Latin Dance Society and Hellsoc and a lot of my faculty ones as well. I’m just excited to get back to those.

I haven’t organised any events within the societies just yet but I was planning on signing up for the VDP program next term where you get to organise a charity fundraiser. If I go ahead with that I’m excited to do something like that.

What are the biggest issues facing students in 2021?

I definitely think it’s between COVID and online learning. So obviously, we’re not on campus, so that’s been a struggle. I know a lot of students are struggling with online learning. So if, hypothetically, we were to stay in online learning, trying to help students, whether it be getting societies, faculty societies in particular to set up more sessions to help tutor students. Or, once we get back to campus, we set up similar sessions or again get the social life back on campus.

I know some students are not as fortunate right now and I talk to students who are scared and just need more support. I really think talking to friends or socialising really helps with a lot of people just so they can talk about their feelings in that manner. Some students are also a lot more stressed because they can’t work and things like that. So just, trying to support students in the best way, is important.

Elections will be held online in Week 4, from October 5th to October 8th. From Weeks 1-4, Tharunka will be covering the lead-up to the elections, including hosting debates with individual candidates in Week 3. If you are interested in watching the debate for Education Officer, check out our event here.To keep up with the action, follow us on Facebook or check our website.