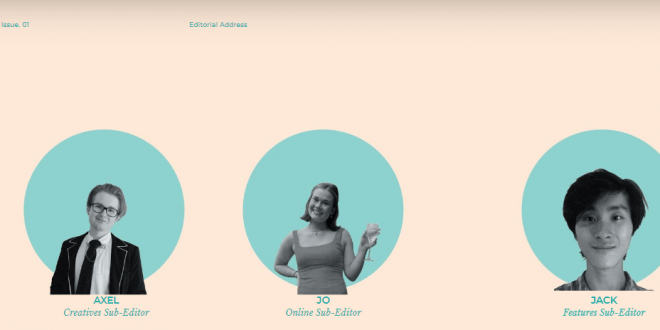 Hey there – and welcome to the first issue of Tharunka in 2020!

In Movement, we reflect on what makes the world change. With Donald Trump newly vindicated in his impeachment trial, Harvey Weinstein jailed over sexual assault, Scott Morrison lambasted for his Hawaii trip during the worst of the bushfire crisis, and the emerging threat of a coronavirus pandemic, the world seems to be approaching a precipice.

But I place great stock in a line from Jeremy Heimans in his recent book, New Power: “It’s not a movement unless it moves without you.” In a world connected by social media, power doesn’t come from leaders any more. Changes are afoot in this strange new world of ours, and we students will be the ones leading the movement.

Taking on the helm of this decades-old publication, I had no idea what I was getting the team into. Immense thanks to Jack, Jo, Axel and Saafiyah for all your hard work, and to each and every one of our contributors for your depth of creativity and the sincerity of your writing.

Our writers express their struggles with the demands of social activism, and give heartfelt stories on their experiences moving through the world. Sometimes it can feel as if we’re just doing the same thing over and over, as Aditya Patil aptly explores in ‘Recurrence’. But when we adopt a new perspective, by travelling to a new place or taking a moment to reflect, we see how far we’ve really come.

When I think Movement, I think of Frank Lloyd Wright’s ‘Fallingwater’, and I’m just going to go ahead and blame my Interior Architecture degree for making me think that way. Mr.Wright aside, this issue was incredibly enjoyable to work on. You’ll see in the upcoming pages, some of the most amazing artworks that I would definitely not be capable of doing myself. CJ Tulong, Rongxuan Chong, Aditya Patil and Sandra Thomson have all brought their own unique take on Movement. I hope that seeing your work in print inspires you to create even more art because someone out there is waiting to see more (aka me).

To all other young aspiring artists out there, know that there is always an outlet for your creativity somewhere, don’t be afraid to take that leap of faith!

This year’s Tharunka is off to a strong start with its inaugural edition, Movement. While we initially had in mind a more politically-bent theme, we were bowled over by the diversity of perspectives among our contributors. Here, you’ll see not only stimulating discussion over the big issues of our time, but the unique voices of the students of UNSW. Isabella Coimbra provides an insightful and historically-based argument for further drug reform. Jordan Daly explores the gentrification of Sydney’s suburbs with a tasteful twist.

My first month at Tharunka has been a busy and exciting time. As someone who has been writing for six years, editing was a foreign and daunting territory that I entered with

apprehension. I constantly found myself torn between two contrasting editing styles. Should I let my writers learn the way I did, through trial and error? Or should I give in to my instinctive desire to help them as much as possible, and inundate them with edits and suggestions?

I have a great deal of admiration towards Rida and Anoushka, who both turned in very promising pieces and worked with me patiently as I (probably) overwhelmed them with feedback. Their pieces—a thoughtful review of the Syrian War Documentary For Sama, and a poignant reflection about living a cross-cultural identity as a young woman in white Australia—have improved so much in a few short weeks and I am very excited to see more writing from them in the future.

This month’s theme Movement also prompted me to explore a new style of writing. Having spent the last six years exclusively writing reviews and essays, it was freeing and exciting to try my hand at creative writing, and I thank Axel for his help as my editor.

It seems appropriate that the first edition of the year seems to rest at the threshold between stagnation and change; the perpetuity and routine of life is set against and is sometimes the same as the extraordinary. Movement is a beautiful launch to Tharunka 2020 – ‘365 Days of Fireworks’ is a poignant reflection on the climate crisis as it is most needed; ‘5 Protest Movements’ reports with acuity some of the most complex and essential uprisings of our era; Liana Charles, CJ Tulong, and Jo Bradley’s works all unify the personal and universal with grace; and ‘Low Tech Lecturers’ is a satire many students will commiserate with. In a time when the written word is immortal, I feel honoured to have worked with the contributors and editorial team towards capturing this moment of history – as, in the words of Lin-Manuel Miranda, this is not a moment: it’s the movement.

Read the full edition of Movement at https://issuu.com/arcunsw/docs/2020-tharunka-issue1-movement-web !

Previous SRC President’s Report: Movement Issue
Next “This is a Threat”: UNSW Exchange Students Left Stranded in the Wake of COVID-19