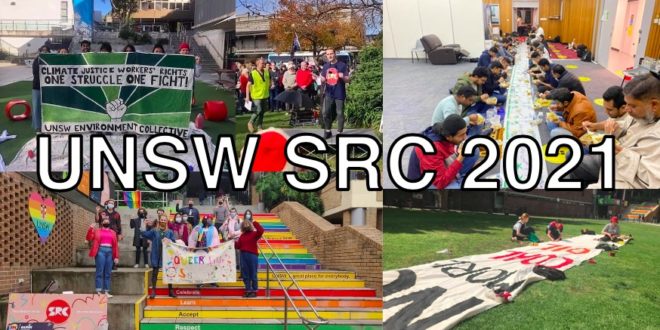 ‘Does the SRC even do anything?’: What the SRC achieved in 2021, and why the SRC election matters

by Nadia Hirst and Katherine Wong

What does the SRC actually do? Do they even matter? In the lead-up to student elections, Tharunka asked the 2021 SRC Office Bearers to tell us their thoughts on student politics (stupol) and their major achievements  this year.

If you’re a veteran UNSW student, you might remember having a myriad of flyers shoved into your hands on campus during election week. You’d be lucky if you caught the names of two candidates, let alone the entire selection. Better yet, if you’re a new student, you’ve probably heard nothing apart from infamous stupol drama. It’s no surprise then that only around 5% of UNSW students actually turn up and vote for their preferred SRC candidates every year.

According to SRC President Tom Kennedy, low voter turnout can generally be attributed to the fact that there is a lot of cynicism amongst students, despite the fact that, “for the most part, the people who run, genuinely do try to do the things they campaign on.”

Most SRC candidates run on campaigns that reflect the ideological positions of their ticket’s quite closely. Each of the 2021 SRC Officer Bearers belongs to a ticket with explicit positions on issues ranging from activism to advocacy, including how to negotiate with UNSW management and act on behalf of students.

“For example, a more left-wing ticket will have more explicitly left-wing attitudes towards the way they approach things whereas a more centre-left ticket, like ours, will have a different approach,” he said.

At the heart of those campaigns are the various Collective’s members. The coronavirus pandemic has made engagement with Collectives extraordinarily difficult, as a typically vibrant campus presence has been reduced to online alternatives. According to Queer Officer Zane Comarmond, this “impacted our sense of community and togetherness, with all of our Trimester 2 online meetings unfortunately having a notable decrease in attendance.”

Nonetheless, it can be easy to see why students have misconceptions about the SRC. Without the visible impacts of on-campus activities, students often assume that the SRC doesn’t do all that much. However, Collective members work tirelessly with student interests at heart.

According to Environment Officer Anna Ho, “The way that I see the SRC, and collectives is – the SRC is a representative body and every year students vote for tickets and hope that those tickets represent their interests,”

“But the collectives are the way for students to actually directly, and democratically engage with activist bodies so that the students will can be exerted and they can run campaigns.”

On the other hand, Anna sympathises with students who think that elections are pointless. “If the extent of student participation in campus politics or activism is that you cast a vote…I don’t think that it’s that useful.”

Fostering a sense of community is crucial to the success of Collectives. The Office Bearer merely acts as an organising force for collective members and the wider student community.

While the SRC Office Bearers do not have explicit ‘job descriptions’, it is their responsibility to advocate on behalf of students who take issue with something at UNSW. As they undertake paid roles, students should hold them accountable, so they are actually advocating for their interests. For Tom, “As president, I get a lot of emails from students asking about specific issues,”

“So, for example, sometimes a student will have a problem with the way an assessment has been delivered or marked or something like that and we will then follow that up with the relevant course and faculty to try get a resolution that solves things for the students.”

According to Tom, advocacy led to some of the SRC’s biggest achievements in 2021. They were able to extend the Census Date by a week in response to the lockdown in Term 2. As a result, upwards of 500 students were able to offset the ramifications of lockdown and drop their subjects without financial penalty.

Soon to be implemented is the standardization of late penalties to five percent per day, which Tom said is “of great benefit to the vast majority of students…particularly in subjects where submitting one minute late will result in a 30 percent penalty or a zero mark.”

One of the flashpoints of success for Welfare Officer John Economides were the meetings he held with UNSW management about the subsidized Mulwarree apartments. They were primarily targeted at international students because they were initially hard-hit by the pandemic, with rent fixed at just $130 per week inclusive.

Through discussions, “we asked them to run the apartments at break-even, which would mean massively discounted accommodation costs to many students.”

One of the other key responsibilities of SRC Officers is student activism. While COVID-19 had a significant impact on campus activities, many Collectives were still able to spearhead campaigns.

For the Welfare Collective, that included the Bus Cuts campaign in response to UNSW eliminating the express buses between Central station and campus. Members of the Environment Collective also helped promote the May 21 Climate Strike, helping ensuring a strong UNSW contingent.

The Queer Collective also held a successful snap rally on campus after a piece of queer installation art was vandalized and torn down during Respect Week.

According to Queer Officer Leonardo Shaw-Voysey, “that was well attended and a great demonstration that we’re here and queer students aren’t going anywhere.”

In the lead-up to the elections in Week 4, President Tom Kennedy reminds us that regardless of your stance on the issues facing students at UNSW, it’s important to know who your candidates are so you can make an informed choice on individuals who can advocate for the changes you envision. “In order to have the best student reps that you can have, you do need to put a bit of time into seeing who’s running, what their goals are, and why they’re running,” he said.

From Weeks 1-4, Tharunka will be covering the lead-up to the elections, including hosting debates with individual candidates in Week 3. To keep up with the action, follow us on Facebook or check our website.