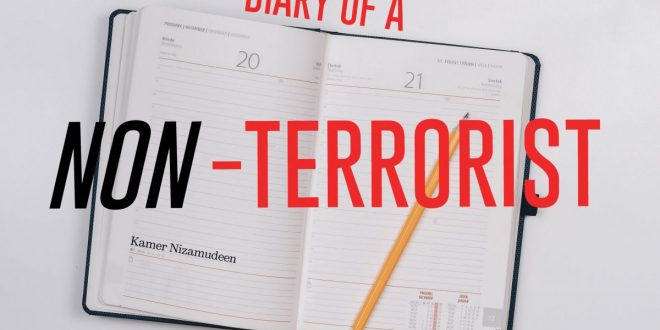 Diary of a Non-Terrorist

I’m a 25-year-old UNSW student who has recently graduated after studying hard and contributing greatly to campus life, and I’m looking forward to planning my future and fulfilling my career aspirations in Australia. Sounds much like the story of thousands of other international students at UNSW, don’t you think?
Hold on a minute now, diary, while my life is turned upside down, with riot squad police raiding my home overnight and taking me away without any questioning, idea, or forewarning of what was happening.

Instead of getting started with my life, I found myself charged with terror offences, thrown into solitary confinement in a supermax prison, and categorised as a national security risk (the highest classification possible in Australia). All in under a day.

All for what? A vague suspicion with a flimsy piece of evidence – a notebook – found in the desk of my old office at the university.
Plotting to murder political leaders and blow up landmarks? Sounds like something from a 4chan thread some kid wrote as a joke and now the university has to have police stationed. Just to make the accusation final, Australia’s finest detectives also declared that I have potential links to terror groups in the Middle East. Only makes sense with a name like mine, right? No fact-checking required.
Having been released on bail after experts could not find any link between the handwriting in the notebook and mine, nor any links to any supposed groups, I find myself studying the media response to my incarceration.
At this point, if you know anything about how the media operates when it comes to discussions on Islam and terrorism, you’ll know that it is a continuous ritual of sensationalism. A ritual which combines half-truths and whole assumptions to piece together a great fable for an easy-to consume spectacle – the spectacle of the threat of Islamic extremism to Western society.
A Muslim name and status as an international student? My background provided perfect to position me as the latest character in this fable. The well-meaning people at The Daily Telegraph (one of our finest media outlets which of course holds itself to the highest journalistic standards) must have been frothing at the mouth when they published their headline “poster boy for terrorism”.

My accusation was perfect in reinforcing the narrative of the fable: foreigners and outsiders sneak into Australia under the cover of their profession in order to undermine Australian society.

The media circus did have its perks though. Somewhere along the lines the ‘fact’ that I was completing a PhD was inserted into the quality journalism of the Murdoch press, even though I’ve never even considered undertaking a PhD. I guess in the end, it was there to serve to reinforce my supposed fall from grace: from aspiring academic to undercover terrorist.
It needn’t be said, diary, that none of the charges of the police nor accusations of the media were found to be at all true, and the investigations into my past revealed no connection to nor any inclination towards terrorism. What the conversation did reveal however is the urgency of the media to latch onto whatever fake news that they can in order to reinforce their ritual. Perhaps this is the only ritual the Western world still holds sacred: the ritual of perpetuating an Islamophobic discourse, orientalist tropes and all, in order to purify its social space and cast out its excesses on the otherized figure of the Muslim.
I did very little to nothing in the whole saga of my criminalisation. It wasn’t really about me, after all. It was the media and Australia’s discriminatory anti-terror laws which exploited me to preserve their fantasy of a pure Australia through the existential threat of the Muslim terrorist—the terrorist which I never was.

Kamer Nizamdeen is currently back in his homeland of Sri Lanka and commencing litigation against Australia Police for wrongful detainment, and media outlets for defamation.

Josh is a graduate Bachelor of Arts student looking to pursue his Honours year in History. Catch him nose-deep in postcolonial theory or the specifics of his powerlifting program, there is usually no in between.

Share
Previous 5 Reasons Why UNSW Should Not Claim ScoMo as an Alumn
Next Found outside the Chancellery, a message written in blood: ‘cancel trimesters.’