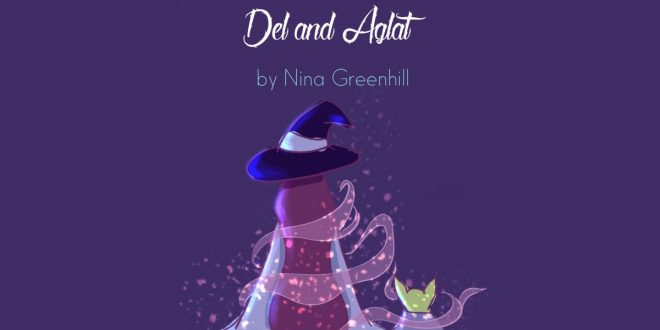 Del and Aglat #3: And What Do You Burn Apart from Witches?

“I’m getting a meal before the heist and that’s that,” Del said, finishing the argument between them.

Aglat sunk into her pocket, arms crossed. “Gotta wait an hour after eating before swimming, and the heist is just as active an activity,” he grumbled.

Del pushed open the heavy tavern door with her shoulder. She glanced around as she walked to the bar, hoping that they had hogget. She loved a good hogget stew, or roast. With rosemary. And gravy. And potatoes. That’d give her strength for the night ahead.

She wasn’t disappointed. As she waited for her food she took a better look at the tavern. It had a low ceiling, the structural beams of the floor above were showing. From them hung dented lamps that gave just enough illumination to see anyone you might bump into. A roaring fire lit the other end of the room, adding to the heat of the people already inside. It felt a long way from the cold outside.

Her hogget shank with mash was shoved in her direction, along with a tankard of spiced apple juice – after all, she didn’t want to be addled, being the getaway rider and all.

She turned to find a spot to eat, only to feel an arm snake around her, pulling her to a table.  Del tried to pull away, still balancing her meal.

The grip tightened. “Now, now, wouldn’t want to cause a scene would we?”

She froze. “Last I checked, it was illegal to physically coerce another without permission, or did the laws change in the past five minutes?”

He pushed her into his chair, his cloak hanging on the wall behind her. Jim, Gritty Tie Guy, sat next to her. She had seen Jim’s face around town often since their first ‘meeting’ two weeks ago, and her ‘departure’. They had ‘met’, and she had ‘departed’ through many back alleys.

“We’re gonna have a little chat, you and me.” He smiled.

She looked to the far side of the room, where a small fist fight had started.

She took a sip of her juice. She could still feel where his arm had been.

“I’m of the thinking that you joining my team might be advantageous for you, being new here and all.”

“You’re still alive, what are you complaining about?” Jim’s smile grew sinister. “Being alive would be in your best interests I would think.”

Del looked across the room again, eyes widening at the sheer number of people now in the fight. The feeling of his arm was stuck around her waist..

“It’s very much in my interests, but I doubt it’d be in yours,” Del answered.

“And what’s that supposed to mean?”

“It means that despite your best efforts, I’m still alive here, and my guess is this is your last attempt to off me before you have to admit to everyone that you don’t have order in your patch.”

But Del didn’t find out what she had dared to do. A body, Del was hesitant to say a person, pummelled by the now-Brawl crashed into her haggot shank. His pearly whites dug into the table top, unable to escape. His hands were smeared with what looked like gravy.

Aglat poked his head from her pocket, invisible to all but her. “I guess that’s why they call it ‘tooth and nail’,” he said.

Jim picked up the body in a surge of anger and threw it aside, not taking his eyes off of Del.

“You’ll pay for what you said,” he threatened her.

Jim picked up Del with both hands by her collar, forcing her to stand, and rammed her to the wall where his cape was hung.

Del panicked. She sank into the wall and felt her magic begin to sap She got out the other side just as all her magic was used up, Jim’s hands still gripping her collar.

She bit his hand with all her strength, and he released her.

Del stared at the wall from the alleyway she had fallen into. She had a very strong feeling that Jim had been holding her when her magic was used, because she could see both of his hands and part of his head poking from the wall. She thought the rest of him had to be trapped within the wall itself or still on the other side.

The cloak that had been hanging from the wall now rested on her shoulders. It was warm in the icy air. She tightened it as Aglat admired her handiwork.

“You’re getting better at that.”

“No, I’m not. That was uncontrolled.” Del stood, shaking with a mix of emotions that she couldn’t all name. She spat the taste of Jim out of her mouth.

She knew there was fear. There was definitely retroactive fear. Her mind had only focused on the situation, and now that she was staring at the wall, hearing the brawl inside, the fear was growing.

His hands stuck out of the wall. She could still feel them, on her collar and on her back, like a brand.

Her hands grew warm. She looked down and saw she was holding flames.

The punishment for his actions by a court of law would be the loss of his hands. Even if she reported it and Jim managed to be apprehended by the lawmen it wouldn’t be safe for Del to stick around in this town for the trial.

Del couldn’t bring herself to cut off his hands. She didn’t even have a knife that could manage it. But she could dispense swift justice.

She sent the fire to his hands, hearing him scream as it caught.

With Aglat safe in her pocket, she ran. It was only a matter of time before lawmen came, before Jim was freed, and before he came after her. She wanted to put as much distance as possible between her and him.

She needed money though. The heist she had been hired on for would get her a few days’ worth of food at the very least.

She changed course and headed for the rendezvous.

She sat on the horse – her getaway vehicle of choice given that carts, wagons, and buggies were slow and cumbersome when pursued.

She was willing herself to be as solid as possible. She had no idea if she could move through living creatures, but after the tavern she didn’t know for sure. None of the books she had read at Mage School had mentioned the ability – the one that she now found as natural as breathing, the one that only she could do, the one that was hers, . Trying to be solid wasn’t making the feeling of his arm, of his hands, go away. It was like a brand, burning her as hot as she had burnt him.

She tried to focus on the job so she wouldn’t cry.

She held the reins of the five horses of her fellow heisters. As someone with no actual speciality for a heist, but who needed money, she had been given the lowest risk job – Getaway Rider.

There was very little she could stuff up for the heist crew, and since the escape was already planned, she was little more than a horse babysitter.

Their crew rendezvous was a small grove alongside the building, one that joined a larger forest. Not a high use space generally.

“You did the right thing,” Aglat said softly. “You saw justice served.”

“I’m not a magistrate though. I’m not the one who is supposed to see it be served.”

“Here’s a question for you then. Can you do anything about what’s happened now?” Del thought for a moment then shook her head. “What’s the use thinking about it then? Here’s a better question – what are you going to do next time?”

Del paused. “Pay attention to who’s in the tavern before I get food.”

“But it’s not about the individual. It’s about the societal attitude. Anyone could do what Jim did. What are you going to do next time?”

The answer bubbled up her throat and out before she could catch it. “I’m going to learn to fight.”

She heard a rustle, and saw two of the crew emerge from a hedge. They had a few sacks with them that they stuffed into the saddlebags. Del had learned that the sacks had a clever bit of magic on them – they were spelled  to be quiet, so when they moved, all the coins wouldn’t jangle around. She was going to ask how it was done after all the excitement.

The two crew members stepped into the stirrups and climbed up on the horses. “Time to go,” Awell said, taking reins from Del.

Del shook her head. “Where are the others? Mo, Ned and Urf?”

Scut  frowned. “They were planning on using us as the fall guys. We found out heading in. There’s this really cool trick where…”

“Anyway, we decided to cut our losses and escape with what we had.”

Awell  nodded. “And we may have intentionally set off an alarm, so let’s move it!”

Del handed the reins over and followed them from the grove. Del adapted to the rhythm of the gallop fast, determined to keep up with the others.

It was a while before Del realised the road they were taking wasn’t the one back to Orleigh. She breathed a sigh of relief.

“Followed us for a reason?”

“Would I want to stick around with double crossers?” Del answered. The riders nodded but stayed very silent. “If you don’t mind me tagging along for a bit, I need to get out of Orleigh.”

Del looked at the star-ridden sky. “There is.”

The two laughed. “I remember back when we had problems like Jim. Got them sorted out real fast.”

“Better than sorting it out hand-to-hand! At least there weren’t ever any knives close enough to me that I had to start worrying.”

Del’s ears perked up. Fighting experience? If she could learn, she could deal with what happened at the tavern when it came up again.

Aglat smiled in her pocket, knowing exactly who she had managed to fall in with.