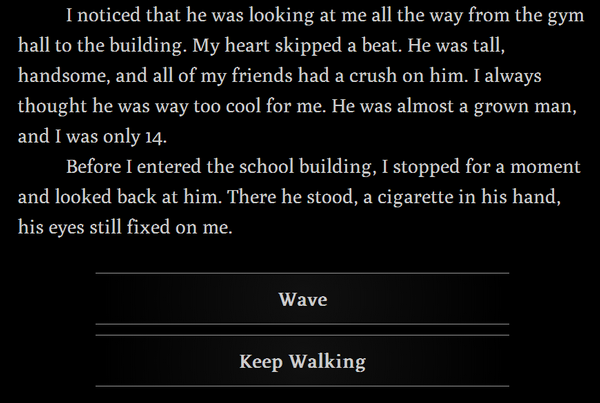 The Day the Laughter Stopped

The splash screen for The Day the Laughter Stopped is graced by a hauntingly vague video compilation of the game’s praises, set to the sound of waves crashing along a shore. “It’s hard to play this game, but it’s necessary that people do,” reads one. “As powerful as it is disturbing,” says another. Yet the screen is surprisingly vacant when it comes to a description of the game’s actual contents. We know that it’s a text-based interactive fiction game. We know it’s trying to raise awareness about something that deserves a trigger warning. But it doesn’t specify what it is. Clicking through the trigger warning disclaimer brings you to this:

“This is difficult. On the one hand, this experience works best if left unspoiled and unhinted at. I can’t, however, let people who might have a strong and distressing emotional reaction to it play it without warning them. So let’s get this out of the way first: If you just clicked the link here out of curiosity or you know for sure that there are no topics that might cause you emotional distress, please turn back and play the game first.”

As tempted as I was to find out more, I knew I fell into the “just curious” category, so I began the game.

The Day the Laughter Stopped feels creepy from the start. Playing as a 14-year-old girl, you are given a degree of control over how she reacts to different exchanges with her schoolmates. She starts getting hit on by an older, handsome boy at her school. As you become invested in this shy teenager’s quest for love and acceptance in a sea of insecurity, you try to desperately ignore the game’s underlying sense of dread.

At the end of each story progression, you are given two options. Embracing the vigour and desperate longing that I, too, once possessed as a 14-year-old, I opted to take the riskier, “cooler” options when they presented themselves. Despite the fact that the options are often opposite (drink, don’t drink; wave, look away; let him, pull back), the more you play the game, the more you feel like your decisions are inconsequential to the reactions of others and the progression of the story. Finally, as the game’s storyline builds to its thoroughly distressing apex, and your character is raped by the older boy, you are no longer able to click certain options, even though you so urgently want to.

Upon completion of the game, you’re not given the chance to go back and try again. If you refresh your browser, the screen simply and ominously states: “There is no starting over. This happened.” (Side note – I cleared my browser history and played again, this time choosing all the “conservative” options, and got the same ending.)

The Day the Laughter Stopped is an attempt to speak out against the discourse that insists women should make active changes to their lifestyle in order to avoid rape, or that women who were raped should have done X, Y and Z better.

The dissonance between what you want to do and what you’re able to do is a very real experience felt by many people who have been raped. Your ineffectual (and eventually restricted) choices in the game do strikingly well in conveying the often misunderstood fact that nothing you do can change the outcome, because the outcome is not your fault. Instead of postulating that “she should’ve just said no”, you are forced to realise that a lot of the time, the ability to say no is simply not an option.

In his blog, Hannes Flor, the game’s creator, explains how multiple studies of patterns of criminal behaviour tell us that rape is usually not an impulse decision, but a premeditated act carried out by someone the victim knows. “You’ve fallen victim to a predator. There is nothing you can do to help this, and suggesting you can does nothing but put the blame on the victim when it happens anyway,” says Flor.

To draw a link across the thoroughly exhaustive gap between a person’s everyday actions and the sick desire to commit such a horrific crime against them only excuses the criminal for their actions.

It is a sad reality that advice such as coming home early, not getting too drunk or wearing modest clothing is touted so often, but is largely ineffective at preventing rape. As well intentioned as this advice is, all it ends up doing is perpetuating a culture where a victim of rape feels guilty for living their life. The experience of stepping through this girl’s story in the game will hopefully aid, even in some small way, in changing the way we talk about and deal with rape in our society.

The Day the Laughter Stops takes a hugely discussed issue and reframes it through a very real and human perspective. The player feels a part of the girl’s powerlessness and lack of control, and it hits a lot harder than any essay or opinion piece ever could. The game is distressing, but powerful. If you’re sure you can handle it, it is highly recommended playing.