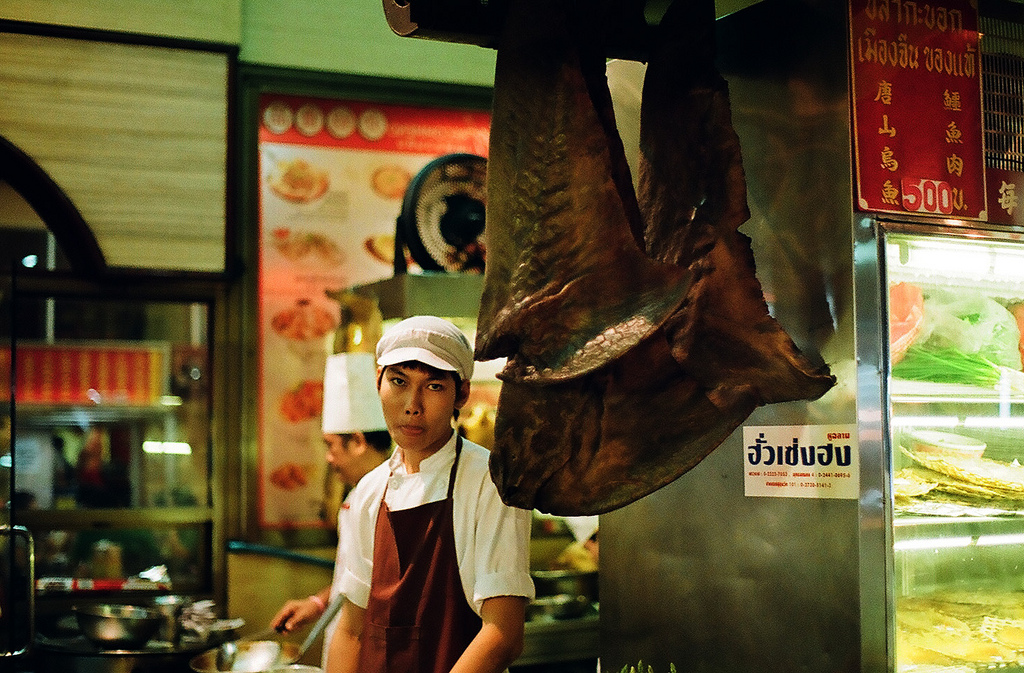 Shark-finning is the process where a wild shark is caught, dragged abroad a boat and clubbed or stabbed to be pacified.

The fins are hacked off and the animal thrown back overboard, where it can take several days to die from starvation, drowning or being eaten by other predators. This is the standard practise; the rule, not the exception.

The fins are used in shark-fin soup, a Chinese delicacy that began in the Ming dynasty in the 14th century. Comparable to tiger paw and penis, rhino horn or seahorse, shark-fins are a status symbol and allegedly a powerful aphrodisiac.

President of the UNSW Chinese Student’s Association, Melody Wang told Tharunka that the CSA does not support the sale of shark-fin soup, but explained that “it represents high status because it’s so expensive and rare. Sharks (are) the kings of the ocean, and their fins have even more prestige”.

Proponents of traditional Chinese medicine credit shark-fin for a variety of health benefits, including curing cancer, however numerous studies have been unable to provide indication of any evidence that supports such claims.

The United States Environment Protection Agency advises women and children to avoid the foodstuff altogether due to very high levels of mercury.Shark fin also contains high levels of lead, zinc, copper and cadmium. Even China Daily published an article in relation to the consumption of shark-fin soup, writing it increased chances of kidney diseases, central nervous system issues and sterility in men if eaten regularly. Remarkably, the fin itself is considered flavourless, with the taste being derived from the broth. Chef Gordon Ramsay said there was no taste. “It’s really bizarre because it actually tastes of nothing, almost like plain glass noodles”.

Wang agreed with Ramsay’s sentiment. “The fin itself actually does not have much flavour in it, but what makes it popular is it largely satisfies Chinese’s people’s vanity,” she said.

Served at weddings and special occasions, it was once reserved for the very upper echelons of the Chinese aristocracy. However, with the Asian region now experiencing soaring levels of economic prosperity, there has been an unprecedented rise in demand for shark-fin from the burgeoning middle-classes.

The result, according to researchers from the California Academy of Sciences, is that the population has been “decimated” so much so that it is estimated that 90% of the global shark population has disappeared in the past 15-20 years. 100 million sharks are killed annually, including the hammerhead shark, whose population has been decreased by over 97%.

Whilst anthropomorphism hasn’t been traditionally applied to sharks, who have received unfavourable publicity with media like Jaws, in actuality, worldwide there are on average only four deaths from shark attacks a year.

“As the world’s apex predator, sharks are the guardians of our oceans…and control 2/3 of our planet” researcher David McGuire said. Without sharks, “important fisheries would shut down, coral reefs would shift to algae dominated systems, seagrass beds would decline, and significant ecological chains would be set in motion” he added.

As sharks mature around the same time as humans do, and are only able to raise 1-2 pups at a time, bringing populations back could also prove problematic. Not surprisingly, the result would have a crippling effect on countries that rely on fishing industries.

In N.S.W, shark finning is illegal, but there is no law against the importation of the product, which can easily be found in restaurants around Sydney. According to the Australian Government’s Department of Sustainability, Environment, Water, Population and Communities, the international trade in shark fins “has been identified as a threat to the long-term survival of certain species of shark”.

Concerned ASB student Mitchell Bennett told Tharunka that there hadn’t been a similar push to outlaw the importation of shark fins. “It is puzzling that free-range eggs and safe-tuna fishing, both campaigns for industries (larger than shark-finning), have changed the production chain but a practice with significantly higher potential for systemic environmental damage in a more manageable market has largely avoided the type of meaningful resistance that could lead to change” he said.

Australia imports 10,000 kg of dried shark-fins annually, equating to approximately 26,000 sharks. Tharunka has found that in Chinatown, up to $200 can be paid for a single bowl, although around Kensington campus the figure is significantly less expensive, averaging at around $20 a bowl.

Despite the fact that there have been accusations that the opposition to the practice is reminiscent of thinly-veiled Sinophobic discourses, students at UNSW were quick to refute such arguments.

“What an absolute load of rubbish! That racism could be injected into this argument is laughable. It’s about the fact it’s unsustainable, outdated and barbaric. And it tastes crap,” one student said.

“Whose culture it belongs to is irrelevant, it’s still a vile, abhorrent and reprehensible act” a Singaporean student added.

Whilst chefs from restaurants such as Rockpool have stated their refusal to sell shark-fin, not all restaurants are so progressive. As some restaurant owners are reluctant to attract the scorn of their customers by writing the availability of shark-fin foods in English, it is often only available on request or in Mandarin or Cantonese characters 魚翅 , (yu ci) meaning literally ‘fish fin.’

Whilst some are sticking to this custom, Wang was optimistic about the likelihood of changing attitudes. “We don’t think it is an unmoveable part of Chinese culture. There are many fascinating parts of Chinese culture, however there are also a lot of negative and outdated ones that we need to throw away. Like the old Chinese saying, we need to absorb the essence and reject the dross” she said.

Tharunka conducted a survey in Randwick, Kensington and Kingsford. These are several restaurants that sell shark fin:

Previous Kinsela’s
Next Labiaplasty and Female Genital Cutting: Not So Different