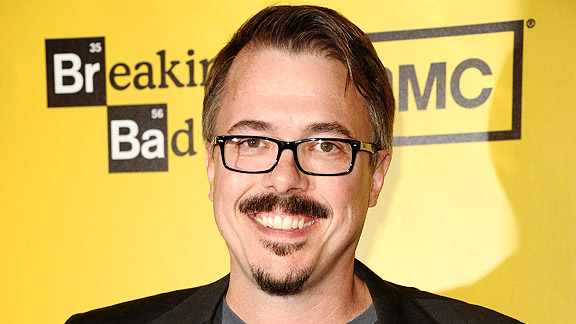 In Conversation with Vince Gilligan

Vince Gilligan, creator of the highly lauded AMC television show Breaking Bad, kicked off this year’s Sydney Writers’ Festival with just over an hour of wine and storytelling with Adam Spencer. Spencer, always the vivacious host, brought out some gems of wisdom and insight from the genius behind the world’s favourite antihero.

Breaking Bad received nominations for 42 Primetime Emmy Awards, seven Golden Globe Awards, 20 Writers’ Guild of America awards, and 11 Screen Actors’ Guild Awards, broke the Guinness World Record for highest rated TV series and was declared an “American classic” by Stephen King. Despite all this, Gillian is still somehow incredibly humble – he admitted that he didn’t really realise how popular the show was “until about the third or fourth season”.

“I was no savant,” he said when asked about his childhood, though he spoke vividly about spending hours reading in his grandfather’s bookstore. “[At first] I wrote just as piss poorly as everyone else.” It’s clear that Gilligan is intelligent and well-read – he spoke cleverly on the works of Anton Chekov and Ambrose Bierce – but not once did he come across as conceited or cocky. He cited years of practice as a factor in his success, but claimed that a lot of it was also down to luck. Simply from his manner of speaking you could tell how grateful he was for the opportunities presented to him, and he made no small point of acknowledging the efforts of the rest of the writing team, cast and crew involved in the production of Breaking Bad.

Fans were given the geek-out moment they’d been waiting for when Gilligan revealed storylines that the writers had binned almost immediately – most notably one where Jesse seeks revenge on Walt by getting Walt Jr. hooked on meth. Gilligan also spoke on characters like Gustavo Fring, whom Gilligan and the rest of the writers had always thought of as an ex-Secret Service mastermind from Chile, and Skyler White, whom he defended against claims of calling her a “bitch”.

Gilligan’s eyes lit up when discussing the writer’s room for Breaking Bad. “It’s like a Japanese tea ceremony,” he said. “It’s very intricate.” He spoke of how he would squash the tip of his Sharpie until it was just the correct thickness before writing out any ideas and posting them on the room’s cork boards. Sometimes, he claimed, it would take the better part of a week to really nut out how a particular scene would end, or what the resolution would be to that episode’s conflict.

It is truly inspirational to see someone who’s achieved so much, yet still seems surprised and humbled by the adoration and acclaim he has received. He ended the night by insisting that Breaking Bad was for the viewer, not for him, and that it was our opinions that truly mattered at the end of the day. Judging by this interview, the rest of the Sydney Writers’ Festival events have a lot to live up to.