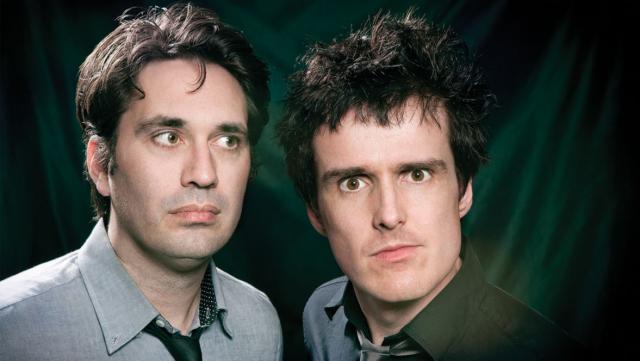 The Chaser’s Andrew Hansen, on being a theatre wanker. When Tharunka spoke to The Chaser’s Andrew Hansen, he assured us that he was brooding in a dark room somewhere, sipping on iced tea. Most of you would recognise Hansen as the guy that played piano and sang satirical songs on the various “Chaser” shows, which is good because that means you might think he is funny and go to his show.

Hansen has teamed up with fellow Chaser alumnus, Chris Taylor, to put on their second live sketch show as a pair, ‘One Man Show’.

“I wouldn’t pay money to see it,” says Hansen, in his typically self-deprecating fashion.

The Chaser are renowned for their satirical take on Australia’s political landscape, but this is a show that isn’t aimed at hacks – Hansen promises there isn’t actually that much substance to the show.

“My personal preference is [that] I just want to be amusing, I don’t even aim to be funny,” says Hansen. “I don’t much care about making a point, when I worked with the other guys some of them were very keen about making a point. I am not that fussed about it, I think this show is a chance for Chris and I to stretch those British absurdist muscles a little more than we do in The Chaser.”

This show channels Monty Python and silliness for the sake of silliness a lot more than the usual Chaser gags.

“It’s kind of old school, [like] all those British style sketch comedies, so with a whole lot of songs and we dress up as all kinds of characters. We explore things that we find amusing, things that annoy us. The show is about annoying Facebook updates and the way that people get outraged and offended online for no good reason,” says Hansen.

Being offended for no good reason is something that Hansen ironically takes particular offence to.  He himself is particularly good at being angry. Conveniently, the show features an expression of that anger – highlighted through song, naturally.

“ [For this] show I have actually written an entire song about this whole phenomenon [taking offence to trivial things] and it interests me a lot. It bugs me and kind of annoys me, so it’s a kind of an anger filled and furious song. It’s probably the angriest song I have ever written. It’s a song about anger, the fact people get so angry about things they haven’t actually seen and don’t know anything about, but they are happy to express their offense about it,” says Hansen.

The process of creating this show was a particularly boring one, and you definitely won’t catch Taylor or Hansen waxing lyrical about their creative process.

“It’s very boring and difficult. For me, it’s just frowning, absolutely stressed out of my mind at a screen for hours on end with nothing happening you know. It’s very boring. One of the papers actually asked us to write an article about how we wrote the show. We had to say to them we can’t write that, it’s too boring. We just sat at a computer and think a lot. That’s how it gets done unfortunately. We missed the boat on all the good times, there’s no LSD – I sometimes have an iced tea. That’s the closest I get.”

Hansen does admit that he has picked up a few fancy, pretentious words from this creative endeavor – even if they aren’t the direct result of his writing process.

“I have always been a massive wanker, and this is a great opportunity to be a theatre wanker. I have started using trendy terms that my director taught me, like “when a piece lands”. Apparently that’s what you now say. I think we used to say, ‘I hope this will fly. [Now] if you are really, really cool,  you say ‘I hope this lands’.”

If you are interested to see the two Chaser boys’ show “land”, check it out at one of two Sydney locations during May.

What is the first change you would make if you ruled the world?

“First change would be I would appoint somebody who knows how to rule the world . I would be terrible. I would fire myself as my first move.”

Snog – Who do you admire even though you have no rational reasoning behind that admiration?

“No one, honestly there is no one I like without having good reason for. Well actually, I am a huge fan of Disney animation and I don’t have any good excuse for that. And I have never met any of my peers who are in to that.”

Marry – If you could have dinner with anyone, every day for the rest of your life, who would it be?

“It would have to be one of my existing friends. If it was someone I had never met before I would be reluctant to sign up to dinner for the rest of my life with them.  I will just have to name my old primary school friends.”

Avoid – Who are you willing to call out as the poster boy/girl for everything you despise or hate about the world?

“It’s every greedy dictator, every reactionary person who doesn’t let everybody say what they want to say. I don’t know if there is one specific person I would want to name, but any commentator or politician who has tried to silence somebody else, I think that’s [the reason] behind why the human race is almost certainly doomed.”