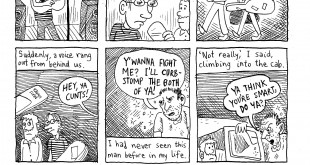 END_OF_DOCUMENT_TOKEN_TO_BE_REPLACED

Do You Know What You Pay For?

In 2005, the Sydney Morning Herald reported that the yet to be passed Voluntary Student Unionism (VSU) legislation introduced by the Howard Government, would seriously threaten the survival of student unionism as we know it. As it turns out, it did. On March 16, compulsory union fees were replaced by …

END_OF_DOCUMENT_TOKEN_TO_BE_REPLACED

What To Expect From Uni Games

What’s on at UNSW sport wise this year? Where to start!? Well how’s about a quick assessment of the University’s most prestigious event from last year. In saying that, it is all universities highlight of the year, that being the Australian University Games. I’m sure we’ve all heard rumours as …

END_OF_DOCUMENT_TOKEN_TO_BE_REPLACED

Whilst the shelving of SOPA and PIPA legislations in the United States has defrayed anxiety for the time being, there are signs that a significant international treaty may, in fact, extend the same obligations around the world. First presented for negotiation in Geneva in 2008, the Anti-Counterfeiting Trade Agreement, known …

END_OF_DOCUMENT_TOKEN_TO_BE_REPLACED

In case you weren’t aware, there is a serious crisis in Europe. Or rather, serious crises that started with the subprime crisis in the United States in 2007. There is a lot to be outraged at in Europe at the moment, between the real estate crisis, the banking and financial …

END_OF_DOCUMENT_TOKEN_TO_BE_REPLACED

The Confucius Institute, an initiative of the Chinese government, promotes Chinese culture and language abroad. It runs 350 programs in 104 countries. According to China’s Propaganda Chief, Li Changchun, it is “an important part of China’s overseas propaganda set-up,” but there are concerns about the nature of its organization and …