The Confucius Institute, an initiative of the Chinese government, promotes Chinese culture and language abroad. It runs 350 programs in 104 countries. According to China’s Propaganda Chief, Li Changchun, it is “an important part of China’s overseas propaganda set-up,” but there are concerns about the nature of its organization and …

END_OF_DOCUMENT_TOKEN_TO_BE_REPLACED

Concerns UNSW Falling Behind in Sustainability

UNSW has again failed to make a list of the country’s top environmentally friendly tertiary institutions, missing out on inclusion in The Australian’s “Ten Greenest Universities.” Higher Education Editor at The Australian, Julie Hare, told Tharunka the universities which had made the list had well-developed operational practices, green buildings, embedded …

END_OF_DOCUMENT_TOKEN_TO_BE_REPLACED

Review: Make Yourself At Home

Piss-bolting through Redfern on a rainy afternoon of last week, I bee-lined my way past bedraggled nine-to-fivers and arrived at the Chinalink Gallery. The current exhibition, Make Yourself At Home, showcasing the works of four emerging Chinese-Australian artists, was a definite shift from the industrial streetscape outside.

END_OF_DOCUMENT_TOKEN_TO_BE_REPLACED 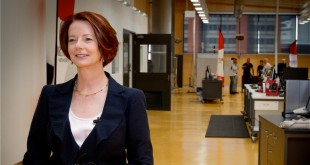 Over summer the Canberra press gallery collectively filed 724 articles speculating about the future leadership of the Australian Labor Party. That statistic is probably wrong, but if political journalists are allowed to make things up, why can’t I? The entire notion of “the silly season” is probably the most self-indulgent …

END_OF_DOCUMENT_TOKEN_TO_BE_REPLACED

Arc announced this afternoon the buy-back of its retail assets by the University, including the Block House, CLB, Quad and Arc Fresh store at UNSW Village. The announcement puts rest to rumours that have circulated since late last year that the University and Arc were negotiating to transfer retail assets …

END_OF_DOCUMENT_TOKEN_TO_BE_REPLACED

Shame, the new film by artist turned film-maker Steve McQueen, has been reasonably well received. Critics have recognised its quality – McQueen’s almost supernatural attention to detail, the incredible competency of its leads – but it will not win an Oscar; it didn’t even receive so much as a mention at the …