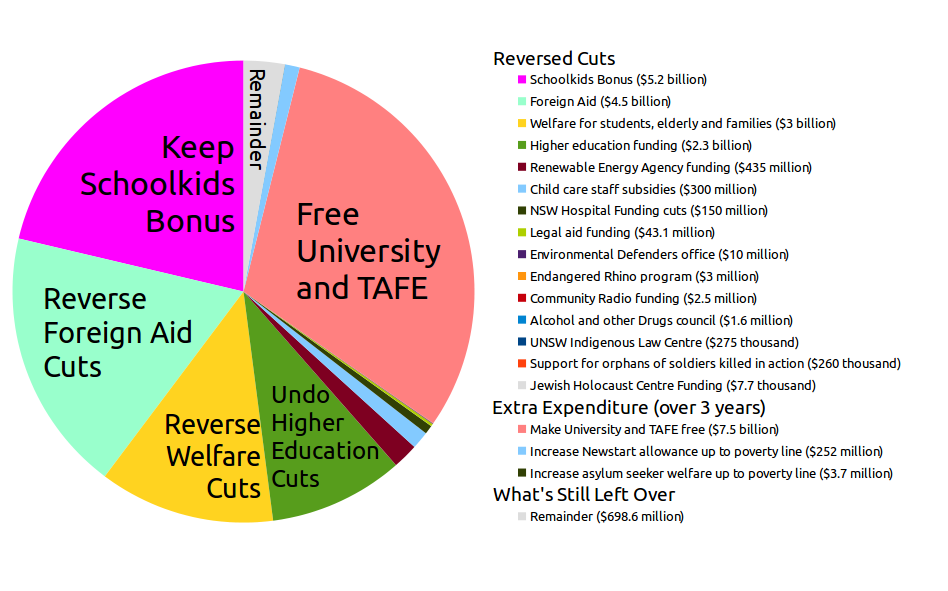 What we could buy instead of shiny new jets

The Abbott government focused much of its election campaign on the supposed budget “emergency”. They’ve cut funding for higher education, welfare, foreign aid and environmental programs. In contrast, the government has also recently committed $12.4 billion to a new batch of Joint Strike Force (JSF) fighter jets, which will cost an additional $12 billion in maintenance and operational costs over their lifetime.

The government has defended this $24 billion purchase by claiming, “This is not new money, it’s money successive governments have carefully put aside to ensure that our nation’s defences are strong.” The government doesn’t have a cache of money stored away. The budget is set year by year. This purchase is no more set in stone than the scientific research and foreign aid programs which have already been cut.

Even if there did exist a $24 billion cache saved by past governments, shouldn’t this government spend it on the supposed budget emergency and crippling debt that they promised to fix? (It should be noted that they did give up on this election promise shortly after the election.) Oddly, by making this claim, the Abbott government is actually claiming that the previous Labor government was fiscally responsible, despite previously claiming that “The cupboard is bare”.

Australia has pulled out of Afghanistan and Iraq, so some may question who our enemy is. Despite this, Treasurer Joe Hockey has reassured everyone that “The first priority of the government is to defend the nation”, because nothing says self-defence like 3,300 25mm rounds per minute. We can now all sleep easy knowing that our representatives prioritise defence over the economy, unemployment, democracy, equity, infrastructure, government transparency, health and education.

Despite having no imminent enemy to defend ourselves against, defence force spending will double over the next 10 years to about $50 billion per year. This means we will be spending twice as much on defence in peacetime than when we were fighting two wars concurrently (Iraq and Afghanistan). On top of that, they’re purchasing $1 – 3 billion worth of Triton drones, and $4 billion worth of Poseidon aircraft

When talking about federal budgets, it’s hard to get a sense of scale because every number is big. Here is a chart to put these numbers in perspective by outlining what else the $24 billion for new jets could be spent on (just the jets, not the drones, Poseidon aircraft or the annual defence budget doubling). It turns out that by cancelling this one single purchase, the government can afford to reverse every single cut they have made since coming to power. All of them. Then they’d still have enough left over to raise welfare up to the poverty line (yes, some welfare is currently below). They could also make tertiary education free (for three years). Then they’d still have some left over for schools, hospitals, roads, paying off debt and so on.

Previous WHAT THEY DON’T TEACH YOU IN ECONOMICS: Does Gross Domestic Product (GDP) even matter?
Next Auf Wiedersehen, Oktoberfest! UNSW Oktoberfest cancelled for 2014